“The hard work’s the easy work.”

After yesterday’s lighter field session, the squad was building into today’s conditioning when Mitch Moses turned to Gutho to enquire about the times he was running. After supplying the requested info, those words of wisdom followed.

The captain’s strange abbreviated response does hold the truth – when you work as hard as he does, the tough stuff does come easy. As always, the King has arrived ready for the preseason, and he has imposed himself from his first steps onto the Kellyville track in 2021. Every time it seems like there might be someone who’ll take the training crown, everyone is quickly reminded about the absurdity of such thoughts. 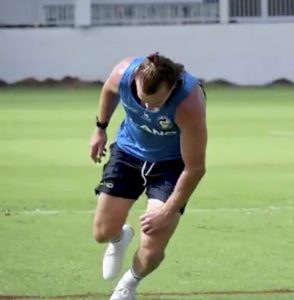 There is surely no question about Gutho being the gold standard and a leader. Positioning himself on the sideline so he could view the work of the entire squad whilst he ran, the Origin Rep led the runs, calling encouragement, along with his humorous offerings, right across the field.

Once again, the first half of the session was controlled by Trent Elkin as the conditioning work stretched out to around 45 minutes. The fitness stuff also found its way into the second half of the morning, with running providing the “breaks” within the opposed footy.

But if Monday’s 13 on 13 surprised with the high standard of play in both attack and defence, today did not quite reach those heights. The established first graders were again split between the Blue and the Red teams, and this time the defence was far more dominant.

In some respects, the defence should be expected to hold the upper hand at training. The “talent” is split, the players’ idiosyncrasies are known, and there are standard sets involved. In reality, during any NRL season, each team comes to learn what their opposition will do, so the challenge is to create opportunities through different options, whilst applying pressure via composure and performance under fatigue. It can literally be the same on the training field.

From a positive perspective, I thought that the line speed and communication in defence was good, and the contact possibly up a notch on Monday. The result was errors in attack. A few too many dropped balls or passes not finding the mark would not have pleased the coaches.

Were there any questions answered today?

There was a bit of attack thrown Bryce Cartwright’s way and I thought his defence measured up well. I’m also convinced that Opacic continues to have the inside running for Jenko’s centre spot, though I thought that Oldfield performed well today. 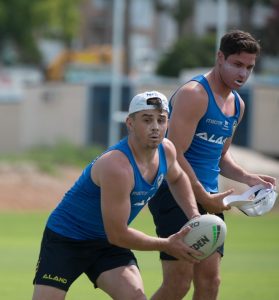 Reed working out of dummy half – photo credit Eels media

The battle for the dummy half role is hotting up, and it reminds me of 2015 when the club started the season with DeGois, Peats and Pritchard, and 2018 when Cameron King, Kaysa Pritchard and Reed Mahoney all played NRL.

The balancing act for this position involves providing all players with time at dummy half during opposed sessions. Both Lussick and Roache are different types of players to Reed. I think one of them might get a bench spot come round one.

Of course, Ray Stone could have something to say about that. Mr 3:16 is having a good preseason thus far and he reminded everyone of his tackling prowess today. On a number of occasions my attention was drawn to how quickly the ball runner was cut to the ground. Asking “who was that?” was obviously redundant.

It may be that Brad Arthur opts for greater utility from his number 14, and both Smith (who looked tremendous in attack on Monday) and Stone provide cover for dummy half as well as other positions. Neither would be the preferred option should Reed fall out of form or sustain an injury that puts him out of action, which is the hole that the club has filled with Roache and Lussick.

So, with bench selections continuing to provide the talking point, a definitive call on the 14 jersey is probably no closer to being made.

I rewatched the last Eels game again today,why?I don’t know. Gutho was spent afterwards,nothing left and understandibly shattered.Then the huddle afterwards where he spoke to the boys was very passionate. I think ,especially if he can win us a premiership, but even without, he will be remembered as one of our greatest Captains and players.Long live the King!

Loving the reports. Fingers crossed for another top four finish but going deep into the finals.

Cheers Shaun, top 4 must be the goal.

Bench positions will be very interesting this year; while it looks good at this point of the year with some players offering stiff competition for what I see as only 2 spots being pretty much guaranteed, with the other two between a back up rake and the other more a utility.

Marata and Papali’i are lock ins. Carty a probability. Then?

I think the bench may very depending on the opposition I have a lot of time for stone I just fear he may fall into that what postion is he trap that many a short stocky forward has fallen into before.
I’d say Roche or Lussick will be battleing for the role of 1st cap of the rack should someone need to start at 9.

Pretty much what I was hinting at. I believe Stone does have a future at the club, but in what position? With the signing of at least 2 designated 9’s and the improvements in Will in the utility role I think Ray will find it hard getting an NRL spot the way things are looking. I would say that if he is given a single position rather than his fill in role last year, and concentrates on his attack and defence should hold him in good steed. Having worked in the DH role though may add to his quiver as… Read more »

Colin, I’m convinced that Stone still has a role to play, but I think that injuries will determine what that will be.

Sixties are u able to say wat kind of times the boys do the 1.2k run??

Without checking that it’s ok, it’s best that I don’t. What I can probably share is that they were very pleased with how the players returned to training, so their starting base was very good.

The sad thing is, that’s true Sixties! The good thing is how much our depth has improved that Stoney cannot figure in the calculations for a bench spot as he did last year. Unless there are quite a few injuries our forward stocks are so strong that IMO, Oggy will be competing with Carty, Hipgrave, Marata, and Papali’i. These are all NRL level footy players, giving us more skill and experience off the bench than we’ve had for a long time. So that’s 5 into 4 if we take 4 mobile forwards on the bench or 5 into 3 if… Read more »

Colin for me, if the Eels can get Roache fit and injury free he will be a shoe in for the 14 jumper. Whether that would happen early or later in the season I have no feel for.

I just think that his skill set is what BA would like to have running at tired defensive structures.

I think we need a dummy half off the bench, but time will tell.

Wondering how the tyro props Hughes and Hollis are performing?

Both still eligible for Flegg but I’m hoping that both will start in Canterbury Cup as they will develop better playing against older players.

Sixties. Have they been throwing more shapes than usual pre-seasons at the centres? (I.e. WB) An obvious weakness last year we need to address one way or the other.

Still very early to make a call on that. We’d still be pre-Christmas in the preseason in this week most years. Which means that there is still some familiarisation of standard shapes and plays going on. That said I am seeing some differences at this “early” stage but I’m not going to telegraph what I’m seeing to “eyes from elsewhere”

I love your articles Sixties…keep them coming!

Sixties I liked the way that the Eels played the game last season. They were patient, they respected possession and made opposition teams work hard in defence. The best example of how good that game plan worked was against the Panthers at BankWest. It also worked good against the Titans as a couple of examples However as the season wore on and injury hit our lack of quality backup began to show.. One of the real pleasing aspects of the back end of the season was that while it became difficult to score, they kept playing with good defence and… Read more »

There was good improvement in 2020 JE. I’m on that page. Our scramble defence was far better, Moses and DBrown strong here.Early in the year, our game management and respect for possession restricted opponents’ ability to unravel us out wide, but this fell away a bit as the season ground on. The top teams started shifting the ball from a long way out, and repeat sets were like gold to slick ball players/runners like Reynolds/Walker. As soon as luck/possession went their way in our finals match, the Bunnies cashed in.Whatever, we’re on the path of eliminating weaknesses.