Can you smell what’s cooking?

Yeah, the weather is warm, there’s plenty of beach time left in this summer, but the footy season is getting closer.

The signal for that today came with the return of Reagan Campbell-Gillard and Clint Gutherson, and the significant opposed work.

Big Reg and the King looked in royal shape though there was very little time for rest for both blokes. A 1.2km fitness test awaited them, before they followed that up with some modified conditioning.

I could try to describe Gutho on the training track but it simply wouldn’t do him justice. The Eels Captain is a freak – his motor just finds new gears that others could only dream of possessing. I’m sure that I heard Fergo let out an expletive when he heard the King’s time for the 1.2km.

The other aspect that always lifts when Gutho is around is the talk. Regular readers of these reports know how I value communication on the training track. Day one for the King saw him barking encouragement and instructions for his team mates during conditioning as well as the footy. His leadership gets better every year. 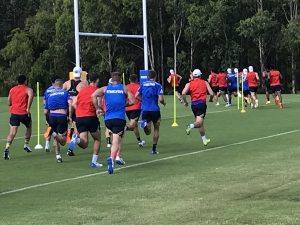 The conditioning work in action

Conditioning filled the first hour of today’s session, and it was arguably the most demanding of this preseason. As mentioned, there was a modified introduction for Gutho and RCG. With other players up to four weeks deep into their preparations, the Origin squad members could not be expected to dive straight into the same workload. That sort of thing is a recipe for injury and modern sports science is conscious of such risks. Accordingly, Trent Elkin builds the squad into their preseason.

On a side note, as Gutho and RCG were being tested, the rest of the squad began their session with running mechanics and sprints. Watching Waqa Blake hit top speed is amazing. Although he would undoubtedly have some technical flaws that an athletics coach could find, to the average punter like myself Blake moves effortlessly fast. I’m keen to find out his best time over 40 metres.

Fitness tasks behind them, the squad was again divided into the Red and Blue teams for a solid hit out of 13 on 13 opposed footy. As per last week, the established “talent” was spread between both teams.

The ice packs would have come in handy after some of the clashes between the middle forwards. Though not quite at NRL intensity, the hits within the red zone seemed to lift when either team threatened to score. I thought all of the middles impressed.

But there were some tries on show.

Both Red wingers, including Maika Sivo, were early to score as they took advantage of good play around the edges close to the Blue line, then found space through quick hands.

But it wouldn’t be long before King Gutho imposed himself on the game for the Blue team, with a clever pass from Jake Arthur putting the fullback into space for a forty metre dash to the line.

The scores were then levelled as Bryce Cartwright backed up a break from his winger to streak away for the try. 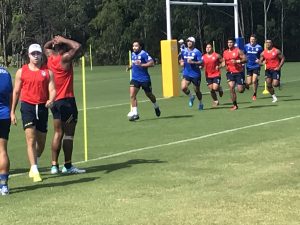 Probably the most demanding conditioning for this preseason

Cartwright also featured in an impressive effort on effort play. A break was made out wide against his team, and the kick was put in towards the line. The big back rower chased back from the opposite side of the field to dive on the ball about ten metres out from the line. He then backed it up by taking the second carry in the set.

The player deserving of a special mention from this session was Will Smith. Not only is Wilbur one of the fittest blokes in the club, but his involvements today were outstanding. His passing was sharp and selective, and his support play was on point, including his charge onto an Oregon Kaufusi offload that saw him turning defenders inside out with a weaving 50 metre run that was only stopped by desperate cover defence just short of the line.

Smith did exceptionally well when called up late in the 2020 season, and his preseason form is vindicating the decision to extend his time at the Eels.

From my perspective, today’s 40 minutes or so of opposed footy had the right proportion of ball movement and tight defence that would have left the coaches satisfied. Line breaks were earned, and easy metres weren’t given up. The footy was quite a good standard and to be honest, very entertaining to watch.

Ahh it almost seems like a pre-season now mate with the whole squad there. It was a warm day today and I can only imagine it will continue to build up.
I hope Reg stays big and Junior too as well as gaining more skills.
Thanks for the write up Sixties.

Good stuff sixties, as the year has truly begun.

Interesting your comments on Waqa and his speed, I have said on a few occasions that he and Fergo should swap positions, even if its in trials to see how they go, Waqa had better speed than Fergs but Fergs the better defender, easy trial swap would be interesting to see how it may work out.

Waqa is quite the athlete Colin. Could easily play wing. But whether that’s in the plans is another matter.

Is Penisini training with the NRL squad?

Gary, I’ve been deliberately not naming the young blokes until they are well and truly settled in. We will provide posts and more details on them in a week or two.

Thanks. I look forward to it

Hi Sixties, 1st time poster on TCT but a long time follower.
Thanks for today’s update.
Re Waqa, he reminds me of a 400m runner with his long strides.
Do you know why Brown and Paulo were given extra time off?

Hi mate. As replied by Parrathruandthru, the two back today were a couple of days early. The others are due back on Thursday.

Great that the boys are keen. Reg may have extra motivation getting so close to an Origin recall , he would want to go one better,just hopefully not in place of Jnr or Brown.Our pack is going to be relentless and awesome this year,close to the best in the comp.

Great depth in the forwards Eggman. Definitely a strength.

How has Hipgrave been going?

Didn’t spot him today, but players have time off for different reasons. He’s been looking quite strong and I see him as a genuine option for the bench.

You haven’t mentioned the 2 backup hookers, how are they going? Do you think Roche will be upgraded to top 30 by first game?

Hi Glenn, it’s a bit challenging to keep an eye on 30 players but I try to give some feedback on everyone by the time preseason has finished. I did write about Roache early in the preseason and Lussick last week for his conditioning. Both are very different to Reed and so they offer a point of difference in attack. Both look to take running opportunities. I don’t think either have Reed’s passing game. Roache is a talented player but I reckon he will be upgraded when they need to upgrade him. The longer that takes, the more ends up… Read more »

Thanks for keeping us up to date Sixties. In light of all the speculation and social media chat, I’ll be keen to see how / when Junior fronts up.

Tks sixties. The season is going to be on us in no time.
Did you read the Zero Tackle click on? Geez I wish that bloke was 100% spot on about our defence, we would have been premiers!

Would Benji Marshall be an option for the Eels as a backup half?

I’m a fan of Benji but I don’t think his ambitions or the money we’d value him at would match.

Imagine the meet up with Matto after Benji and others and their comments about Matto wanting out of the cats.

Forgot about that Colin. Was it necessary to remind me?

Apologies John, I also meant to mention the other cat Backdoor Benny who had to have his say in the ring.