Wow!!! What an opening half of footy. No one expected what transpired in the first 40 minutes of the Battle of the West.

The Panthers struck early after tough early exchanges from both sides, but the Eels soon hit back with two tries to take a 12 – 4 lead.

Dylan Brown was upended in a very dangerous tackle from Nathan Cleary.

Referee Todd Smith with just a handful of first grade games under his belt had the toughest decision of his young NRL refereeing career. He poised himself, got all the information from the bunker and then sent the NSW Origin halfback on his way.

I thought Todd Smith handled this very well. The so called “experts” who tweeted and reported it wasn’t a send off should be embarrassed of themselves for such declarations.

If it was Sean O’Sullivan or a lesser player, would they have carried on like they did?

Such out and out favouritism towards a superstar from some in the media was just appalling.

But credit to Nathan as well. He took it on the chin (yes, pun intended), was remorseful for his actions, blamed no one but himself, and took the early plea of 5 weeks.

From this point the Eels ran in another three tries to take an unassailable lead into the sheds.

But that’s where things came to a grinding halt.

The ruthlessness was gone. The attack stopped. The Panthers were creating over laps with lesser players.

Did the Eels just put the cue in the rack? If so, that sort of mentality won’t win titles.

With 50 points beckoning, all the Eels could muster was just 4 points in the second half.

Personally, I wasn’t comfortable in the second half until there was about 10 minutes to go. The Panthers scored a try and had a number disallowed. Penrith should not have got that close to scoring. In my opinion, the Eels just didn’t aim up in the second half.

Did the injury to Moses, and Dylan Brown’s spear tackle, leave our play makers a bit shaky?

Nonetheless, the first half was a rugby league masterclass from the Eels against the NRL’s number one side and that must still be acknowledged.

I’m going to split the key numbers into the two halves to highlight the differences between the first and second forty minutes.

As these numbers show, there was a big swing in possession with the Eels dropping by nearly 30% on completions.

The Eels were making metres but their errors cost any momentum. Even being in the Panthers territory for over half of the second half didn’t help the Eels attack, and only spending 6 minutes in the Panthers red zone would have left Brad Arthur unimpressed.

Junior Paulo and Ryan Matterson led the charge for the Eels with 161 running metres each. Gutherson chimed in with 150 run metres in what I think was his best game of the season. Reg, Shaun Lane and Isaiah Papali’i also had big running numbers with 147m, 143m and 144m respectively. 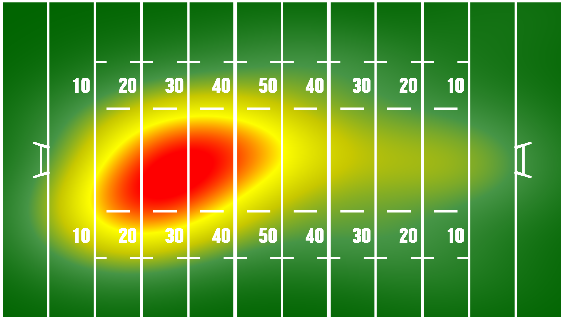 The Eels had to do the hard work to earn this win. In the second half, the Panthers kicked into corners to make the Eels work it out, and this does skew this a little.

Last week the hit up heat map couldn’t have been better, and yet the Eels were smashed on the scoreboard.

As a reminder, here it is: 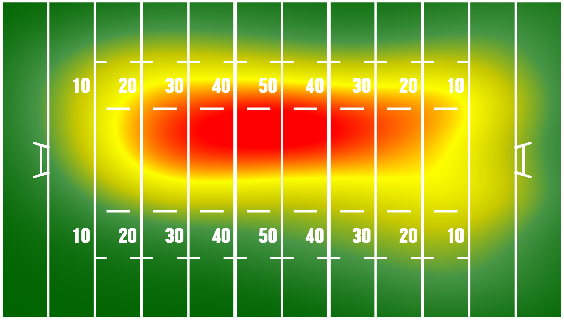 And now this week’s map is hardly what you’d expect from the winning team in a 34 – 10 victory!

The simple answer is that the Eels failed to capitalise on the platform laid last week. Still, to have such contrasting heat maps over consecutive weeks, with each not really aligning with the result, is bizarre. 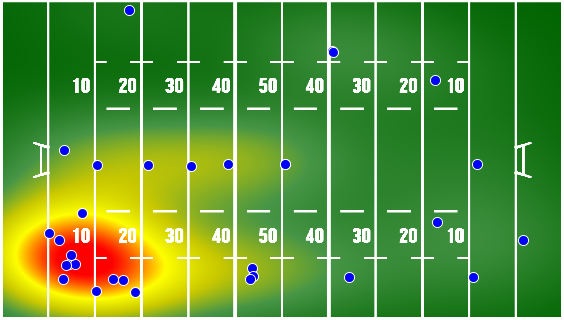 Kick off after kick off skews this graphic. Four set starts in the Panthers red zone was a little light on considering the score. What you can take from both these graphics is that Parramatta’s attack starts deep and ball movement is key to getting a roll on.

Parramatta made 516 post contact metres and were able to offload 18 times to get some crucial second phase play happening.

The Eels made 327 tackles. There were 23 missed tackles with 8 ineffective, giving a tackle effectiveness of 91.3%.

Reed Mahoney and Shaun Lane shared the top tackle count for the Eels with 39 each, closely followed by Matterson with 36 tackles and Ice with 30.

From a discipline perspective, the Eels made 8 errors, conceded 6 penalties and gave away just the one set restart.

I have been critical of our bench use this season.

So, with that in mind I thought I’d look at the running metres from the interchange players.

Though you can’t do too much when you are given limited time on the field, it also demonstrates that when Reg and Junior have a spell, so does the Eels forward momentum.

This week our little award will be going to Dylan Brown.

He started off well, the spear tackle then shook him up a little, but he still played a very good five-eighth role.

Dylan didn’t over play his hand and was instrumental in the Eels first half points rush.

I don’t want to be super critical after a great win, but the Eels really need to put in 80-minute performances, week in week out, to win a premiership.

Yes, it was brilliant to beat the best team in the comp, but if the Eels follow it up with another poor performance against Manly this week, then it will be worth nothing and again Parramatta will be struggling to stay in the top 8. The Eels need to be ruthless against a fractured Manly outfit.

The next month of football will be tough for Parramatta without Mitchell Moses. Jake Arthur will play to his best and all Parra fans need to get behind him. Dylan Brown will need to step up as well.

I’ll back our Eels to navigate this last month of footy to cement their rightful spot in the finals.

Tks Colmac. I noted Penrith made only 4 or 6 errors(depending which stat service), whatever, they made most of these in the 1st half. They really out disciplined us in the 2nd half. The average errors per team per game across NRL is around 10… 4 is like a hole in one.

No doubt they tightened their play, stuck to systems that work. It will be interesting to see how they adjust over the next 5 weeks.

Great read Colmac. Really happy about the result. Glad to see Gutho and Mahoney improve best games all year arguably or at least since round 9. I think these two playing well is the key to stop our inconsistency this season. I think these two have been the main architects of putting the team under pressure in key moments…. Anyway hopefully that has stopped now. I was initially wanting a huge score put on. But then I found out Moses played 50 minutes with a badly broken finger. No not a simply pop it back in and off you go… Read more »

Pete, I can’t believe the focus put on the second half by some.
its literally glass half full vs glass half empty – seriously. Look at the Roosters vs a decimated Manly. What happened there? Where are the critics? No Roosters are being hailed the big smokies!
Should we be happy with a big win or disappointed we didn’t put on 50 against Penrith? Seriously

Another interesting stat I read and illustrates how important middle defence is. Korosau made 57 tackles with only 1 missed. If the middle is rock solid it’s very hard to get points.

Great stats as usual, can anyone enlighten me is the “flop” still penalised? Looking at the riff and their 3 men tackles its usually 2 then a flop i thought that was still a penalty. The nrl is rife with it at present. Watch this weeks games and count how many you see, would like your opinions

You got me Johnno…I blogged this on another article, I thought when we had them under the pump in the first half it was flop city, but the ref went with the 13 v 12 mood. Koroisau was like a thief with it, just lurked then flopped, added nothing to what a tackle is supposed to do.

BDon they succeeded in slowing the play up. It’s the go to tactic vs Parra and I half blame us because we don’t struggle in the tackle to draw attention to it.

Johnno, you are spot on. The flop is back big time. Penalised 1% of the time. You have to be unlucky to be pinged for it.