It was a welcome return to the positive when reflecting on my experience in the stands last Friday night.

The packed stadium provided a genuine hum of anticipation that could be heard and felt before the start of play.

All those in attendance will know what I mean. The excitement within the crowd who either anticipated or hoped for a great game was palpable.

There’s been plenty of talk over the last decade about the AFL taking over rugby league’s heartland. Anyone at the ground last Friday or in attendance at our previous meeting at Penrith earlier in the year, would certainly know that the passion for rugby league is very much alive in Sydney’s west. 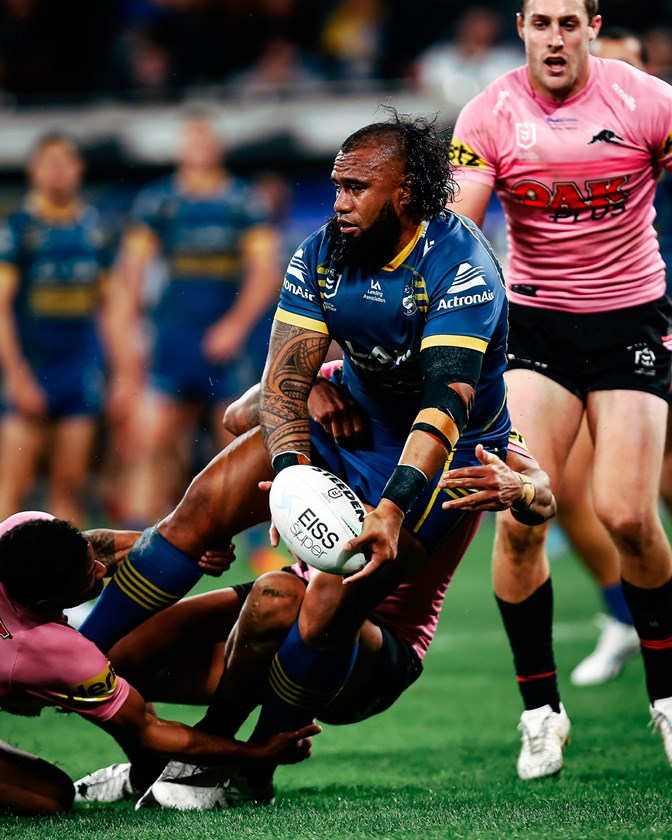 On the field it was obvious from the outset that Parra was going to have a red hot crack.

They say that styles make fights and for whatever reason we are always in the fight when we take on the Panthers.

From the opening set, you could see our mindset was one based around winning. For me that was the most pleasing take away from the game.

Against good teams, we must create offloads and run more often from dummy half. This creates that little extra space and time for our talented playmakers and backs to pick teams apart.

Maika’s try was beautifully set up in the previous 10 minutes. You could see that every time Dylan Brown went short to Shaun Lane the Panthers outside men came in a little more. Eventually they came in too far and Dylan, Shaun Lane, Tom Opacic and Maika all did their job beautifully to take full advantage.

It was a perfect example of being patient and believing in your plan, playing smart football.

On occasions this year I have been a little critical of Reed and Gutho. It was never a question of their want or desire, but at times they have made really ordinary choices in games.

But from the outset against the Panthers they played with energy and almost simplified their job. 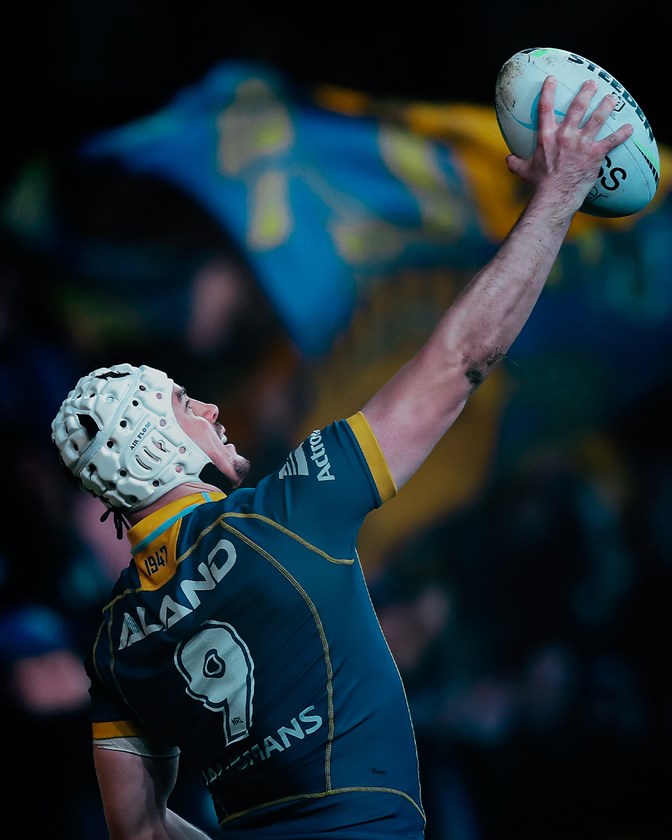 The number 9 is so important in the modern game. I hope that Reed continues to selectively run from dummy half because that keeps the markers honest and engaged a little longer which will only benefit our outside men.

At the ground it was noticeable that Gutho positioned himself in the centre of the field much more. I think with Moses being out for the next few weeks that will be even more important as attacking through the middle may just be our best option for the foreseeable future.

Friday night’s game was worthy of much praise.

There were fine performances from Eels players. As for the Panthers, they were tenacious in the second half and Api Koroisau was so skilful around the ruck.

The care and protection James Fisher Harris showed towards Dylan Brown as he responded to the dangerous tackle by Cleary was also worthy of a mention. It was a genuinely caring response after an ugly tackle.

We then had the the courage of a young referee to make a challenging call which, though highly consequential was proven to be right.

Finally, the crowd and the good natured jibes between the rival supporters added to the atmosphere on the night.

I left the ground feeling nothing but happiness that I and the thousands around me had made the decision to make the trip to watch our team.

In the days following I was disappointed but not surprised to hear large sections of the league media find negatives in that game, most notably with our team.

Being at the ground and in the stands the last thing that anyone would think was that the home supporters, or at least the vast majority of the home supporters and players are disconnected, or that the players don’t care or respond positively to crowd support.

In recent years, journalists have even been critical of Parra’s inability to win away matches without their home ground support. Now we are supposed to believe that our team is disconnected from its fans and does not engage with them. You cannot argue both sides of this issue and maintain a credible position.

Over the next few weeks leading into the finals, all teams will have some ups and downs.

This season Parra lost two games to bottom eight teams. These were obviously two games which should have been won.

Like most fans I have been frustrated by the inconsistency.  But we must never forget that up to this point in the season we have won two more games than the Roosters and Raiders and three more games than Manly. We have won one more game than the Rabbitohs and the same amount of games as Melbourne and the Broncos.

When are these teams called out for being inconsistent by these very same journalists and commentators who constantly find fault with Parra despite the achievement of beating the Panthers twice this season?

Finding only negatives to focus on from our game last Friday is nothing more than agenda driven bias.

I passionately support my Eels, but unlike certain journos I can put aside any bias to recognise the qualities of all teams. I’ll even acknowledge the consistency, toughness and skill in one of our fiercest rivals, the Panthers.

Is it too much to expect paid professionals to do similarly?

The next few weeks our team will face tough games against a desperate Manly, and our kryptonite in the Rabbitohs. It won’t be easy, especially without Mitch Moses.

As a fan I can fear the opposition or I can unconditionally support our boys. I choose the latter.

Just as I am sure that certain league commentators will criticise our team no matter the result, I also know that the vast majority of the Blue and Gold Army will get behind our boys, and cheer every single one of them to victory.

the atmosphere was buzzing, it felt like the first game against the Tigers, just would have loved the Eels to keep up the intensity in the 2nd half but they did what they needed to do to get the win without too many injuries, hoping Moses recovers quickly

Thanks for your reply Gwen. Like you, I’m not too concerned about the Eels failing to post 50 against the Panthers. A 34-10 win is satisfying.

A mate cajoled me to go to the game and I was so happy that I was such easily swayed. It was a tremendous atmosphere and despite the second half I went home happy, albeit it bit later than usual as the game deserved a few celebratory drinks.

Alas, the narrative around the Eels is such that almost no matter the result, if feeds the nattering nabobs of negativism who probably would not be happy and find something to complain about even if the club won a grand final.

Shaun, I can imagine exactly what you are saying.

It was such a great atmosphere on the night , the only disappointment was the NSW cup lost in the last minute after playing most of the game with just 12 players , also why don’t they televise these games as the opening games , camera man was next to us and he was recording the game . It would make it so much easier to watch players coming through the grades , instead of many of the fans commenting when they debut “ Who’s that kid “? Also would give value for money for the families coming to the… Read more »

We too were in the stands behind the goal posts on Friday night, and I agree with you the excitement around us was palpable. Having opposition supporters around us always makes you a little nervous, but as you said everyone was respectful and the banter was fun. I felt our boys were amazing and I was very proud of each and everyone of them. Your comments about the media is so true, so many have their own agenda. I noticed once again an article in The Roar was about players Parra have let go. Give it a break!!! How many… Read more »

I want to apologias right up for what I am going to say in this post, delete it please if needed but I have been somewhat simmering since the riff game and comments made by a certain head of a team not involved in this match. I refer to GG the head at the dogs, well for me he’s in the right place, and why should a person in his position have such media exposure to dictate to all and sundry, players, clubs and supporters and have the gall to pull the long ban on young Cleary as being over… Read more »

No need to apologise. I totally agree! The NRL seems to consist solely of very poorly managed conflicts of interest.

We all know Gould has a job for life at channel nine , we just mute him when he talks . If it was a parra player doing that to a Penrith player you would never have heard the end of it.

I agree that most if not all can see through the spin and bias from Phil Gould. The real problem as I see it is that the current NRL administrators only seem to care for themselves and protecting their positions and if that means giving into people like Gould and Rothfield to keep them onside or to shut them up they will do it. Gould and Rothfield complain about the referees and MRC but they also complained about having two referees at the same time as they wanted the game sped up by rule changes. Their complaining got rid of… Read more »

Shelley, vg post and would love to see them no longer allowed to adjudicate as well as being made to stick to one job, that being his dogs spot as it suits him to a t (small one) these sideline professional loud mouths should not be allowed to hold positions at NRL levels at the same time as they are commentators in the game, its a total conflict of interest. In his position at the dogs, he has no right to be talking down coaches, players, refs etc whilst sitting in an on field and moreso with the gabba mouth… Read more »