I hate losing to Manly, I really do. But unlike last week, this post isn’t about my hates or grievances, it’s about our team.

If I looked hard enough I could find some positives from this loss, but I’m not sure that would be the best take from a truly awful performance.

The score indicated a close game but it wasn’t and Parra didn’t deserve to win. Winning when you displayed a poor attitude may in fact do more harm than good.

Imagine how the footage will be cut up for this week’s team video review – playing as individuals; leaving tackles for other players; solving attacking indecisiveness with one out runs; passive and weak defensive hits; aimless attack.

How many of you were left scratching your head at different stages of that game?

With every Parra fan screaming at their televisions “run at Suli”, the Eels illogically did the opposite. Indeed, for most of the second half, they tried every attacking option but the obvious and smart one. 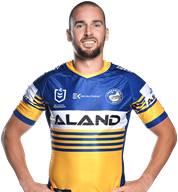 Senior players like King Gutho will need to demand accountability

The positive from this loss will only come if both the individual players and leadership group can pinpoint what led to the poor attitude and ill discipline in both attack and defence. I’m positive that when their team review rolls around, they’ll look back over the week and find some signs of the slip in attitude.

Top teams rebound from bad performances. There’s a reason you never want to play the Storm after a loss. The system at Melbourne demands accountability, and it starts with the coaches and the senior players. The Storm don’t play two bad games in a row. And when it comes to their roster, if a player can’t adjust and learn from poor performances Bellamy moves them onto another club, no matter how much talent or potential they have – case in point, Brodie Croft and Curtis Scott. If they can’t be relied upon to hold the ball, play with discipline, make tackles and stop tries being scored they can find another home.

So, if top teams learn and rebound from bad games, the next few weeks will tell us more about the Eels as they move into an “easier” part of the draw. There are no easy games in the NRL, but it’s fair to say that certain teams are harder to overcome and Parra have had quite a series of challenging games. The opportunity to bounce back should and must be taken. 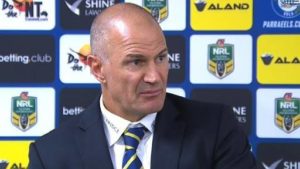 Eels fans were greatly disappointed in the team’s performance, and understandably so. However, as much as we’d all love our team to play every week with superb class, maturity and execution, that will never be the case. I know we have some scars as Parra supporters, but have faith in this team, they are different. I’m backing our players and coach to use the game as a learning opportunity and for our leaders to demand accountability.

Therefore this week’s game has a little more importance.

Wests Tigers games always bring much fun to my household. We are a family made up almost entirely of Parra supporters, but we do have a few annoying Tigers fans amongst us. They always tend to complain and hate us Eels. They honestly feel that Parra’s sole purpose is to steal their players and derail them as a club!

The Tigers will be up for this clash. They’ll have a simple game plan. If both sides play to their best, Parra should win.

However, the Tigers will not beat themselves. If the Eels drop the ball early and are passive in defence, like they were against the Eagles, they’ll let Wests into the game and it may be a long night.

So the real question for this upcoming block of games is, will we play to our potential or play down to our opponents? The attitude of senior Eels, and their demand for accountability from each player, will determine the outcome.

I’ll back my Eels, they will bounce back.

Shelley, the game was indeed excruciating to watch. The tone was set (very) early and it didn’t pick up much after that. If their was a game plan in their somewhere, it was pretty hard to spot. I think several weeks of tough games and injuries/absences explains the performance. The loss isn’t the issue (even if it was Manly), it’s the way we lost. Anyway, we’ll all be cheering for Parra this Thursday and I’m sure we’ll see a very different attitude this time around.

Frustrating to watch is spot on. Like you said we need to move on.

There are a hundred takes from that game Shelley, but we just opened out a huge gap between our best and worst, it’s got to be a one-off. The fact that we gradually competed better gives hope that it is. Maguire has Wests looking feral.
Losing Nathan Brown can be underestimated in the fog of that farce. With RCG and Marata he had troops to dig in and fight, he was lifting bigtime but unfortunately injured. Leadership by example gone when most needed.

I agree, I think Nathan Brown is so important for our team, we struggled but it is not the end of the world.

I believe you’re right Shelley, the boys will bounce back this week.

I believe winning while down on key troops with the absence of Mitch, and Browny and our forward rotation substantially weakened with Kane Evans and Penni out of sight for a sustained period might well have created a passive consciousness of “all we gotta do is turn up”!
Having succumbed to the inevitable “Keating factor” this loss is the loss we had to have. We can now build consistently towards the finals.

Winning two games out of three whilst without Moses and others was a good result. It was probably the manner of the Manly loss which was tough to take.

Good discussion Shelley – here’s hoping for a bounce back