Did the NRL Nines nail its unofficial mission statement – whetting your appetite for the season ahead?

Whether or not it was a success, the Perth event is done and dusted and has now moved into that rear-view mirror, rapidly disappearing from our sight. The bonus – all players returned home fighting fit.

NRL teams are currently in the preseason downhill run – tapering their work to suit their upcoming trials. For the Eels, that means a Canterbury Cup hit-out at Ringrose this Friday, and the highly publicised clash with Penrith at Bega on February 29.

What does training look like for the Eels this week?

Yesterday was one of those rare afternoon training runs. Perhaps rare is the wrong adjective, given that during 2019 the Eels moved times around to suit certain match times. However, from a preseason perspective, late afternoon training is not commonplace.

In a session which was about 75 minutes in duration, there was an extended warm up period of just under half an hour. It consisted of position specific drills – in simplistic terms, the backs and the forwards warmed up differently, much like they do prior to NRL matches.

The remainder of the session was composed of opposed work, firstly working on match specifics (more on that later) before moving on to an opposed game. The afternoon concluded with Joey Johns working with a group of players.

An interesting feature of today’s training was the split of the players between the Blue and the Gold jerseys. Rather than having the top 13 NRL players vs likely Canterbury Cup, there was a split of talent between the two teams. This could have been a pointer to the trial this week.

We therefore saw contests such as Junior (Gold) vs RCG (Blue), Matto (Gold) vs Nathan Brown (Blue). Three of the spine were in Gold with Reed Mahoney opposing them in Blue. 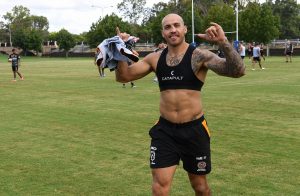 Fergo at All Stars training

Notable absentees were Fergo and Taka, who were in camp for the Indigenous All Stars vs Maori clash, and younger squad members Schneider, Hollis and Hughes, who I assume were training with the combined Canterbury Cup and Flegg group. Their places were filled by some Canterbury Cup contracted players.

Defence, specifically defence following a kick chase, appeared to be the focus during the opposed drills. The kicking team commenced sets as if they were on tackle four. This would be done at different parts of the field, and involved a variety of kicks. The goal appeared to be composure in the chase and getting the line set and aggressive to limit the yardage in the kick return and in the following couple of tackles.

The opposed game featured strong defence – to be expected with the talent split between the two teams. Supporters would also acknowledge that defence was the hallmark of the Eels performance at the Nines. However, the Gold team seemed to have the edge in attack with Moses, Brown, Gutho and Sivo asserting their superiority in the latter stages. The result was two tries to Sivo on the back of sharp shifts which simply worked a numbers advantage. 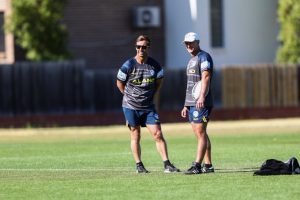 As the extras commenced and some of the players worked with Eels coaching staff, Joey Johns took centre stage to work with his group. Watching this immortal coach small groups or individuals is a fascinating exercise. In addition to the skills imparted, the art of deception and the importance of communication are emphasised. And similarly to what I’ve observed from BA’s coaching, the explanation about forcing certain defensive decisions and how that shapes what an attacker can do is incredibly engaging, because it often unfolds that way in practise or in opposed games.

The evolution of Moses as a playmaker is evident during this time. He is thoroughly immersed in these sessions, and his voice is just as prominent as Johns as he asks questions and then takes ownership as he implements the plays.

Don’t forget, the second Canterbury Cup trial is scheduled for Ringrose Park this Friday night when the Eels clash with the Rabbitohs at 7pm. I’m expecting a few more of the full time squad to play this week, so make sure you either get to the ground or follow Forty’s live blog.

The curtain raiser will be a Flegg trial, kicking off at 5pm.

The 25 man squad has been named, and as expected, it contains numerous NRL players. In fact, with this list, the clash could qualify as an Eels NRL trial. In contrast, the Rabbitohs are treating the clash as a Canterbury Cup hit out.

I’d expect Keighran and Davies to share dummy half duties with Mahoney and Levido to play in the halves. Salmon might also be utilised in the halves to allow Parry to spend time in the centres.

Sixties after all the travel and work of last week I reckon the players may have been looking for a quiet session yesterday. If they were they did not get exactly what they were looking for. It was a hot day yesterday as well. I like the idea of mixing them up between the Blue and the Gold team. I don’t think it is something that you can do often. However done occasionally it can have some good learning outcomes . Starting to lose patience for the Rd 1clash against the Dogs to come around. Having said that I see… Read more »

Yesterday was late afternoon John. Not too hot, cloud cover was there. I thought the storm was about to hit as there was a bit of thunder about, though it didn’t eventuate. It was a solid session but nobody got flogged. Probably ideal for this time of the preseason.

Of course we are all eager to see our spine in action to see what they have learned from Spending time with Joey.One of the big questions this off season is which props get a run, Nuikore is one, Polar and Evans are both effective in their own rights and both are fit, I guess Kafusi and Stefano wait for their opportunity. Just wondering your opinion or will Evans and Polar be given a run on friday to sort out the pecking order.When you think about it the strength of our interchange with Moreoa gone is hinging on the hopeful… Read more »

How about a bench of Alvaro, Evans, Niukore and Stone for Rd 1

I like that.Alvaro offers that solid defense especially the last 15 -20 minutes of the half when other forwards are tiring, his wieght loss will make him a machine.Evans just seemed energetic when he came on late last year. And I like Stone he will be good for us I feel.Not long to wait now, ring it on.

I also feel that Niukore is developing into a real impact player. He brings a lot to the 17.

My opinion has changed throughout this preseason. For now my bench is Stone, Marata, Polar and Evans. Stand by for a dedicated post on this topic. It’s already written but I’ll post it later today.
I too am curious about which forwards play on Friday.

Alot of fans seem to have doubts about Stone from the limited run he’s had in 1st grade but I thought he was just warning to it when he got injured, size seems to be the biggest concern people have of him but he is tough and full of energy, I think as he settles in to his role he will be an important element in the team, not a champion player but an aggressive, energetic nuisance in the middle, something that we have been lacking I think since Scott and De Gois retired, Prichard had it but was unfortunately… Read more »

I see a little bit of Manu in Ray Stone. I think that he is more than just a great name

I like your reference to the aggressive, energetic nuisance of De Gois and Scott. Goisy was great for line speed and aggression, and Scott was all aggression.

I tried to put the two in corresponding columns but it did not work.

Stone is younger than Bateman and without the same experience, he is not quite as tall nor as heavy as Bateman, but as he fills out a bit I would rated him Stone in the same level as Bateman but nowhere near as dirty, Stone plays with the same toughness but a lot more fairness.

Just my thoughts with Stoney.

Good observation Eggman. I had forgotten how much we missed those three guys and another from the same mould was Nathan Peats. The 3 hookers in particular were all very quick off the line in defense and led the charge much like Brown snr does now. This is the only reason I have Stoney just edging out Taka for the utility #14 on the bench. Having Stone come on to give Reed $$$’s a short spell and then transitioning into the middle for Browny to spell looks to have some real potential and adds some more structure around our rotations.

I’m with you Rowdy.

Cheers Sixties, re: trial, NRL website is saying kick off at 7pm?
I notice this is a new page on their website which was put up today.

That would be the Canterbury Cup kick off. Flegg is 5pm.

Other aspect is that the trials will be available as Streamed services for those with an NRL account. Lookin forward to that.

Does that include Friday night Colin

I believe so John at least what is found on the NRL web site
https://www.nrl.com/news/2019/10/25/2020-nrl-trial-dates-sharks-and-bulldogs-to-play-in-port-moresby/

Interesting squad announced for the trial by the eels. Also mentions the live stream if one has an NRL account will be available through the eels webb site/

Ill have the chips, nuts and snacks ready Col.

Sixties i think it’s interesting the bench names have changed a bit. I have no idea obviously but we need a back up for Mahoney and I’d be using 2 props at least. Niukore could also be a prop….good to see so many players lining up this week. You can almost taste those expensive hot dogs but tasty on the way to the ground.

Its an interesting team especially as its basically a CC match with the primary trial down at Bega against the riff if I remember correctly. There is a goodly number of NRL players while the same with CC players, looking over the team, I think Mahoney is there to give him competition time, the back up is likely to come from Stone and Davies, with no Gutho named I would suggest Smith will be given some time in the 1 position. Not knowing the unknowns in the squad, who goes in at 1 is interesting, perhaps Parry might be a… Read more »

I’ve got the feeling that this could fill Ringrose!