Prior to the start of the 2019 season, only the most optimistic of Eels fans rated Parramatta a chance of playing finals football.

And that was fair enough.

On the back of a wooden spoon season, the Blue and Golds were a popular pick to go back to back with the NRL’s least treasured “trophy”.

There was little to no respect for the Eels team. The players would probably be honest and say they didn’t deserve any – after all you can’t earn any redemption before a ball gets kicked in anger in the new season.

What I was certain of was improvement.

From November 2018 to March 2019, I witnessed what I’ll term as the best pre-season I’d ever seen. All pre-seasons are “the hardest ever”, but this one was smart.

Skills sessions saw the coaching staff of Arthur, Murphy, Kidwell and Potter develop the attacking football we are now marvelling at. These switches, long passes, short passes, offloads and kicks aren’t a new phenomena for the team. It started during the preseason.

Blood was shed in the sand pit tackling drills. Just as the team has found its attacking mojo, the defence has now found its sweet spot – leaking only 75 points across the last 8 games.

The physical preparation was all quality. It’s continued throughout the season proper. Adrian Jimenez, Lachie Wilmot, Scott Fraser, Brendan Inkster and Alex Rooke have done an outstanding job. Consider this – with two grades playing finals football only one player is unavailable – Will Smith (a broken arm suffered last week). 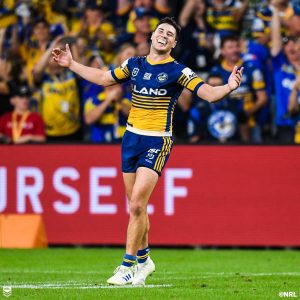 We knew that high profile players such as Mitch Moses, Michael Jennings, Brad Takairangi and Kane Evans and others hadn’t lost their talent. But without doubt, their ability was being stifled by whatever was happening in their mindset.

As far as Brad Arthur was concerned, the 2018 version of the Eels lacked a bond – there just wasn’t the unity that successful teams need. The players have since spoken about the pre-season camp, how they opened up about themselves to their team mates. And then there were those honesty sessions with BA.

That’s what they needed to do inside the squad – to sort themselves out.

But let’s get back to earning respect.

Arthur was determined to start the season well. To be on the front foot from the opening whistle, round one. It was a message delivered time and again during the summer months.

He wasn’t aiming for the respect of other clubs, he wanted to set up for a successful season. But when the team delivered the victories, such respect was conspicuous by its absence.

There’s a fact that needs to be emphasised: The Eels are one of only four teams to have sat in the Top 8 at the end of every round throughout the season. The others are the Storm, the Rabbitohs and the Raiders – there’s no question about the respect given to those clubs.

There’s no flying under the radar. They haven’t scraped into the Top 8 – they’ve been in there all season!

Yes, Parra have had their hiccups. The Magic Round capitulation to the Storm earned derision and kicked off a three game losing streak.

Moving on through the rounds, the loss to the Sharks probably emphasised the total disregard opposition teams had for the Eels. The Sharks bench was captured laughing during the second half and captain Paul Gallen later agreed with Phil Gould who put it to him that the Sharks had allowed some late Eels tries due to boredom.

It would be easy to say that Karma is a bitch – but rather than focusing on the unearned arrogance of Cronulla, such comments and reactions spoke to a complete lack of respect for the Eels.

But it didn’t stop there.

At the end of round 19, the Eels were sitting in 6th place with a favourable draw over the final six rounds. Yet a number of rugby league journalists were still nominating the Eels as the team to drop out of the Top 8. Paul Gallen maintained his stance that the Eels wouldn’t qualify for finals footy.

Last week we saw the ultimate disrespect for our Eels.

Plenty has been made about the Broncos and “Pokiesgate” – and the poor preparation that this was for a finals match.

Forget any focus on poker machines. There is another take that can be offered.

Would the Brisbane players have “prepared” the same way if they were playing the Rabbitohs, the Storm, the Raiders or the Roosters? You know the answer.

It was a lack of respect for their opposition that was a big factor in staying out late when they had a 7am team breakfast on the day of the match.

So we come to this past weekend. And the major headlines? We can’t have a Storm and Roosters grand final. Despite coverage of this week’s clash, talk about their match up in the preliminary final has remained. Seems like the Eels are just a minor speed bump on the Storm’s path through the semi finals! 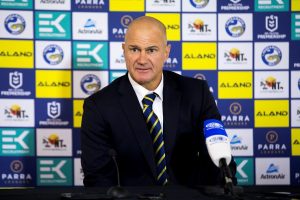 Finally, we arrive at the lack of respect extended to Eels coach, Brad Arthur. Despite Parramatta’s improvement from wooden spoon to a team which has remained in the Top 8 for the entire season, Arthur has never featured in coach of the year discussions.

Instead, the focus has been on the likes of Hasler and Stuart. While not denying that both have enjoyed great success this season with their respective teams, there can be no denying that Arthur’s achievements are at least worthy of similar recognition. Not that he’d want it!!!

Does respect earn you a Premiership?

Does it help the Eels play better?

It could even be argued that if teams haven’t respected Parra, that this works in the Eels favour.

What is certain is that Bellamy will ensure that his Storm players are focussed on producing their best this week. They’ll consider the Eels to be a dangerous opponent. They must. The minor premiers are facing sudden death footy.

Regardless of the result, our Parramatta Eels have earned respect in 2019.

And they might just push for a bit more in the weeks ahead.

Saturday night—17 on 17. Let’s play football ! Stuff their respect or lack of it. Let’s see them chasing the numbers on the backs of our jerseys. Go Parra

Absolutely. The players will be focusing on their task. Respect or lack thereof won’t win a comp, but it’s sweet to achieve results when people have little respect.

Anon, I think you meant to say respecta!!! lol

Melbourne Storm will not disrespect anyone. They will prepare well. They always do. I hate them but you gotta hand that to them. No complacency from them, never ever

PS well written and enjoyable read as per usual. Thanks

Thanks. I have no doubt how well the Storm have prepared. We will soon see how they fare in this sudden death clash.

I noticed the same about coach of the year conversations. He is just not mentioned, yet Hasler, who is in the Super Coach sphere is spoken about as some find of the year. It does not make sense. Anyhow, whom gives a stuff, Arthur has matured, has finally got a side he can truly say is his own (took a long time to unravel the mess that was the old Parra). He is my coach of the year.

Well said 10 year. I can tell you that BA is not interested in getting that type of attention, and probably prefers that he’s not in the conversation. What does matter is the respect his team have for him and how they perform. He’s done a fine job this year.

Just watched the weekend wrap up on the ABC. Not sure if they even had Parra turning up. A major problem this year was long absence of key players, Brown x 2 and Jennings. Plus, Evans got his body right and along came Waqa.This hasn’t been on the radar of most ‘experts’. Our absolute best 17 is now on the park. Go the mighty Eels!

Good points BDon. I’d even argue that Moses is playing his best footy with Dylan Brown in the team.

👏👏👏 fantastic read mate. Everyone loves an underdog don’t they 😉💙💛💙💛

The press have tried to paint Manly as that underdog. And they are to be admired, especially without some key players. But there was a spoon team that finished ahead of them this year. That’s the true underdog story.

Great read “Sixties” it’s obvious that the media has it’s favourites and we’re not one of them. I believe that’ll change after this weekend

sixties
Author
Reply to  The Captain

Some fair calls Captain. As I said, there could be none expected entering into this season. And this is very much an upward trend in what we are doing and not yet an expectation of our team. But those odd poor showings earlier in the season have been more than countered by a season where the team has been a permanent resident in the 8. I firmly believe that the team has earned more respect than they’ve been shown. I will also refer to the Knights being premiers in 2001. The Eels had beaten them by 40 points near the… Read more »

We didnt deserve the spoon last year imo, there were teams worse than us we were unlucky with injuries and out of form roster, the Titans are 10 times worse than us this year than we were last year.

Yes we did. The points table doesn’t lie. That way shortcomings could not be passed over or brushed aside. Look how the Broncos have reacted to their defeat last Sunday. If it had been reasonably close, their shortcomings may have been glossed over. The deserved wooden spoon of 2018 has resulted in very positive reactions. Hey, why am I writing this, I had “forgotten” about last season and am enjoying the 2019 ride so much!

Graz and Chris – It was agony watching the team last year. They would prepare well, then go out and look like a rabble. The reasons are now documented, but like you Graz, I’m glad that every problem was exposed. And that review was such a calm measured approach. I met the review team at training and it was a truly independent exercise with knowledgeable people.

Great read sixties, I’ve been wracking my old brain trying to think of the last time we played the Storm in Sydney during the season proper. I wonder if 40 knows the answer to that. I’m nervous about tomorrows game but I just hope the boys turn up with the same enthusiasm they had last week.

Round 11 2016 June Parra Stadium. We lost.
Can I recommend Rugby League Project website.
If you enter rugby league project head to head parramatta Eels in the search engine you get the complete histories against every club.

Thanks 60’s . 2016 is a blur for obvious reasons . I remember now, I went to every home game that year. My husbands dying wish..

The Eels should show no respect to the storm this weekend. I hope we have a couple of forwards looking to give cam smith a rally bad night out. I hope we treat them like Banther Fodder & don’t take the foot off their throat until they choke. I hope the Eels beat up on them so bad that the roosters crap themselves. Then I hope we turn the roosters into a meal deal next week. Most of all I hope the Eels shut the media grubs up that constantly disrespect us. Watching NRL 360 last night & when they… Read more »

You sound pumped up Jim and I like who’s in your sights! Go you Eels.