Over the last two years, TCT has profiled the fine community work of the clubs that participate in the PDJRL. It’s been a learning experience for us, one where we’ve also found out about the significant investment in junior rugby league made by Parramatta Leagues Club. Essentially, their generosity assists in greatly reducing the cost of playing footy for every club and every junior player in the district.

Two years ago Trivett Subaru came on board as a supporter of the Parramatta Junior Rugby League. Eels fans have probably become familiar with Trivett Subaru’s involvement via their popular raffle to win a Subaru Impreza, with tickets sold at Eels home games. During 2022, that raffle raised over $40K for the junior clubs.

Special recognition was also given to Matt Brady for his work over the past 8 years. Matt is transitioning from working as the Pathways and Participation Manager into another executive role within Eels pathways.

Forty and I attended the event and are pleased to list the following award winners: 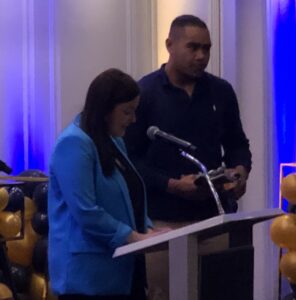 Referee of The Year – Olivia Lawne 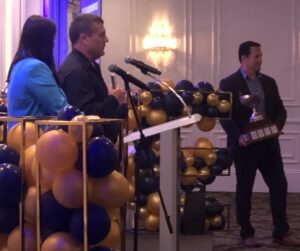 It was obviously a massive night for Hills District Bulls, certainly one that was richly deserved. As Mick Gremmo noted, volunteers in junior clubs don’t put in all of their time to win awards or to produce the next NRL player. They do it to help make each young boy or girl a better person.

We extend our congratulations to all of the award winners, and our thanks to each and every one of the clubs for the important work they do with young people in their communities.

So 60’s, can you comment on the allegations that only two or three clubs get any significant assistance from the Eels and the rest are left to wither. Please note, this is a legit request for insight, not a thinly veiled implication of wrongdoing. The stories I hear, which I sincerely hope are inaccurate, is that internal politics in the junior leagues is rampant. Given that all the juniors that we seem to be producing atm seem to come from Rouse Hill Rhinos, can you elaborate ?

To be honest Brett, this post was put up in recognition of the terrific work that all junior clubs do. As such I am quite unwilling to turn this into a debate about such matters that you’ve raised – this is not the forum for it. Anytime I’ve felt that something needs to be known, good or not so good, I have spoken to people within the club directly. I know nothing about the Eels favouring certain clubs ahead of others in terms of assistance. But here’s a truth. Right back to when my father played A grade in the… Read more »

Nothing sneaky about it, it was a statement of fact, not an accusation

To be clear, this wasn’t a dirt digging exercise on my part, it was a genuine unbiased request for information. You’re in and around the club, I am not. A simple, “despite what the trolls are saying, it’s nothing out of ordinary” type response is all I needed, if that was the truth.

Brett you know who the trolls are. When they are posting you’d be able to have a fair guess about whether they would have any way of knowing the truth or not. For the record, I’ve not heard anything out of the ordinary.

Ok, I’ve just seen some comments from people who claim to be involved with the junior league saying that unless kids come from a few favoured clubs, I’m guessing Wenty, Cabra, Hills, RHR, that they just get ignored. I was hoping you could shed some light on whether there is any truth to that

Brett, the well run clubs do not need any financial support from the Eels. Hills, Rhinos,WEnty for instance have strong sponsors ( Wenty Leagues for instance) and run very profitable cafes which feed into the junior clubs. Hills for instance have successfully run the largest touch football summer comp for decades which in turn assists the junior club,.all these are done on the back of volunteers and hard working committees. Active committees, working on sponsors and good coaching and then winning teams has been the basis since the 70s/80s and nothing has changed. Some of the clubs just struggle to… Read more »

This was the type of response I was looking for. Cheers BD

Grateful for the clubs your so worried about because the board havent supplied coaching staff with a major signing since theyve been in power , the parra canarys , everything cheep cheep , no vision !!!!

Agree ,,board havent made a major signing since theyve been in power , the top clubs make a least 1 decent signing every season , 4 seasons =o so far .

The board has nothing to do with recruitment