The Tip Sheet turns itself over to the fans this week as Sixties and Forty20 are joined by a fascinating ensemble cast of Blue & Gold stalwarts. 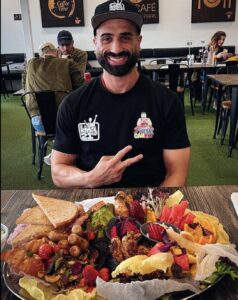 First up is a rising star in the domain of professional eating. James Webb, who competed in front of over 40000 people to finish 3rd in Nathan’s Famous Hot Dog eating contest, talks to the boys about how he fell into the world of competitive eating. You’ll be stunned by how much food this athletic bloke can consume in one day.

James’ journey and achievements over a short period have been amazing, but there is footy to be discussed.

It turns out that a chance meeting with Nathan Hindmarsh set him on the path to supporting the Parramatta Eels. 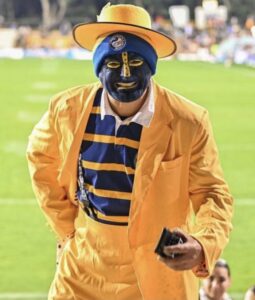 The Parramatta Prophet (James Ada) is our second guest this week.

Believe us, you won’t mistake who he is!

With appearances as a pharaoh, The Mask, Woody, and Laa- Laa to name but a few, the Prophet brings extra colour to the footy.

Growing up in North Parramatta, and with a father who bleeds Blue and Gold, James was destined to be Parra to the core. So why did he take it that step further?

The boys talk to James about his passion for the Eels and entertainment, and the joys that connection has brought to young Parra fans. 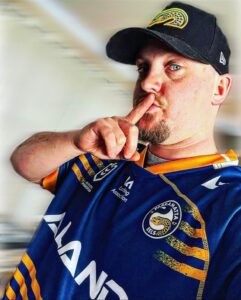 The Tip Sheet then goes international as last up is Ron who hails from the US of A.

Ron provides a fascinating insight into international fandom after discovering the NRL during the COVID lockdown. The trio discuss how he became a fan of the Eels, what his learning process was and how he has connected to other fans over here in Australia.

Ron is passionate in his belief that rugby league is a gem that if marketed correctly would find many more supporters in America.

His observations on the game and some of the biggest stars make for compelling listening.

Of course there is a huge game facing the Eels this week, so Sixties and Forty20 quiz each guest on Parramatta’s journey through the 2022 season as well as the unfinished business that lies ahead!

Great ep. I bet Sixties and Forty20 have now put more effort into to understanding the US market than NRL HQ has. Greep’s Chicago accent is a fantastic addition to rugby league’s rich soundtrack

Cheers Adam. Bernie Gurr has also been terrific to chat with on that topic.
Ron is a ripper. We had a very long conversation before and after recording, and he is so dedicated and passionate to not just following rugby league and the Eels, but to fully understanding the game at a deeper level.

What a nice change of pace heading into this week’s game. It was interesting to hear about Ron’s learning process to understand the NRL. It wasn’t dissimilar to what I faced when a US mate suggested I should get into the NHL (go the Caps!). Well done gents.

Cheers Shaun. I found all three to be so fascinating. I had followed James Webb’s exploits before learning he was an Eels supporter and we spoke a couple of months ago about having a chat. It was similar with Ron. Then last week I had my first conversation with James Ada and was impressed with his sense of humour, and dedication to bringing positivity to supporting the club. I found myself saying to him that we needed to get him on the podcast. So with the NRL advancing furthest than before, and the NRLW also playing in a grand final… Read more »

Great listen I feel for mr greep pain I’m living in germany .I don’t have any mates to talk about the games with besides listening to you blokes or the one eyeed eel bloggs .
I watch the games through watch nrl app the good thing for me is prime time games are at 11am 11.50am .

And the early game starts at like 9am . As for this weekend I will be in Sydney and will be going to leagues club . To you 40 / 20 and sixties look out for me 🙂 Go parra

Cheers Anon. Make sure you say g’day. One of the best things about our live appearances has been the number of people who’ve introduced themselves. Thanks for listening! Go the Eels!