Sixties and Forty20 convene the morning after Parramatta’s 27-8 loss to the Penrith Panthers in Week 1 of the finals. The non-quite instant reaction edition of The Tip Sheet focuses on where the Eels got it wrong and the opportunities they missed.

The Blue & Gold were in it right up until the final quarter of play but a slew of errors – including a horror night from Waqa Blake – hamstrung their chances against the reigning premiers. Throw in a quiet night from three-quarters of your playmaking corp and a scintillating performance from Nathan Cleary and you arrive at the end result.

Still, the boys debrief the entirety of the game as well as what lies ahead for the Eels in Week 2 of the finals. A sudden death fixture against either the Storm or Raiders at CommBank Stadium is on the horizon and both Sixies and Forty20 still have plenty of confidence in the team.

For 50 minutes we were proper in it. The worst of it for me is Moses – hope he he is doing well. If we are not lucky enough to have him next week, I am resigned to a finals exit. Couple of things for mine: Cleary put in a performance for the ages … that was up there with Andrew Johns at his best Not dirty on Waqa – feel sorry for the bloke; can’t think of any player who would like to sit under those bombs. Mentioned elsewhere, but the pressure on Cleary as kicker allowing him time… Read more »

Agreed about the errors Chris and lack of kick pressure.

Brad’s record the worst in the nrl 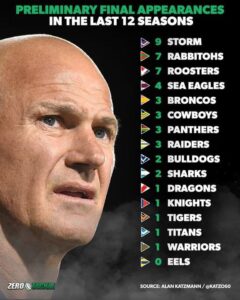 We are all disappointed Mike. They were too good. Our poor defence over the season might cost us. I would still have BA any day and be competitive than languish at the bottom of the table

We lost against the best team in the comp, full-strength, rested with the premier playmaker in the match playing the game of his life.

Moses going off was unfortunate.

Not failure yet. Giving up at this point is failure.

You miss the point. He said he was happy with Brad as long as we don’t finish bottom 4

I thought the team was fantastic but just ran out of steam after halftime. Cleary was fantastic. Ennis was right, we didn’t put enough pressure on Cleary. Waqa – yep it wasn’t good but hell it would be a nightmare to catch those bombs. BA – Maka needs more than 10 mins ! JA – (can we criticise him without everyone losing their shit ?) Nathan Cleary ran around him… just think about that… a tired Nathan Cleary ran around a fresh JA ! if he is our 2nd best half at the club we are in trouble. I won’t… Read more »

Brad is a massive joke in selecting his son who isn’t anywhere near the standards needed and never will be.

I did think the same thing about Cleary running around JA, at first glance it looked pretty poor. But I was too busy throwing my toys out of the pram after that to watch the replay.

We needed more in attack from the spine I agree, but on Dyl going missing, Munster had a pretty ordinary game against us last week and he’s regularly talked about as being the best in the competition.

I do think that you were right on the money in that some players did their best to not lose the game rather than try to win it. You could see Parra gaining ascendancy and then a mistake changed momentum, especially that first one when Penrith scored down a player. In the end 14 points came as a result of errors (including Reed’s ridiculous strip right on front of the goals). And yes, The Chin did play a blinder. Destiny is still in Parra’s hands and they don’t need to fix too much. But BA and the team are at… Read more »

Fair comment Shaun; i was disappointed in the onfield leaders when MM went off; we needed to settle it and play footy in their red zone, and cut the bloody errors. It was v disappointing and to me we gave them the last 20 mins.
Junior looked Gassed

Yes Milo, once Moses was gone my head dropped as did the teams’. Hope we curdle The Milk on Friday.

Yes but it’s disappointing as we’ve done this before.

Tks men, agree that wasn’t all a shipwreck.You can see there’s something to build on, the game didn’t turn on lack of attitude or effort. Penrith’s constant tempo and energy just gobbles up freebies, throw in a kicking masterclass and it’s a tough gig. Randoms – Crichton took a dive and sucked in the bunker, there was no force into his legs, it was a grab. I also thought that Luaui intentionally contacted Waqa’s arm/shoulder and impeded him without playing at the ball prior to first try, and also did Luaui feather touch the ball before picking it up. Gutho… Read more »

BDon, Luaui has become a bit of a tool tbh and he seems to milk a lot; this is where for me we need an enforcer there to line him up.

Great discussion guys.
Before I comment on Parra. I just wanted to say the Panthers played probably their best game all year. They found a New gear and put the foot to the floor. Clearly was plotting this revenge while suspended. His best game since Origin.
Now to Parra, just wanted to say how disappointed by the result. But more disappointed by the errors we put on. Just terrible for this time of year.
But all is not lost.
Eels v Raiders is our last chance.
We need to find a new gear and floor it!
Go Eels!!

We needed cool heads out there in the second half and tbh we did not have it. I was quite disappointed in some senior players in that they didnt seem to play how we should play. We did not really pressure Cleary’s kicks and tbh we allowed him this space….it was not good enough in that respect. I thought until Moses went off we had a 50/50 chance. I was miffed about some players not coming off / some off. We will need a v strong bench next week and know where Canberra are going to play. I am quite… Read more »

You know sixties and 4o always try their best to defend Jake for the obvious reasons, but they always say that Jake is deservedly in the 17 to cover Moses and there’s nobody else in the squad who has the ability to cover the halves There in lies the problem, everyone knows that Jake is nowhere near good enough, is slow, doesn’t have the lateral cover, yet BA didn’t find it necessary to find another option or at least keep another utility like will Smith who’s done the job previously. It seems like Brad has gone out of his way… Read more »

Much has been said about kick pressure. One of the first things to go once fatigue sets in is line speed and the second is kick pressure. The coach knowingly goes into a game against a team renowned for fitness and line speed with basically a two man bench. It’s no mystery why our line speed and kick pressure suck. As for Waqa I actually wrote on here after the Storm game that Cleary will terrorise Waqa on Friday night. He let balls bounce against Melbourne and it was no surprise he had a shocker against Penrith. I defended Brad… Read more »