The Parramatta Eels have reached a critical point in their roster management. In the eyes of many supporters, an upcoming retention decision will be making a bigger statement than the decisions made in late 2021.

It involves the man who owns no shirts – Ryan Matterson.

Matto is in rare form.

In 2022, coming off the bench, the utility forward has produced his best footy in an Eels Jersey.

Matto’s numbers are simply outstanding. His running metres off the bench come in at an impressive 160 metres per game. Most of this has been the hard yards as a middle forward, though his versatility has also seen him used on the edge by coach, Brad Arthur. 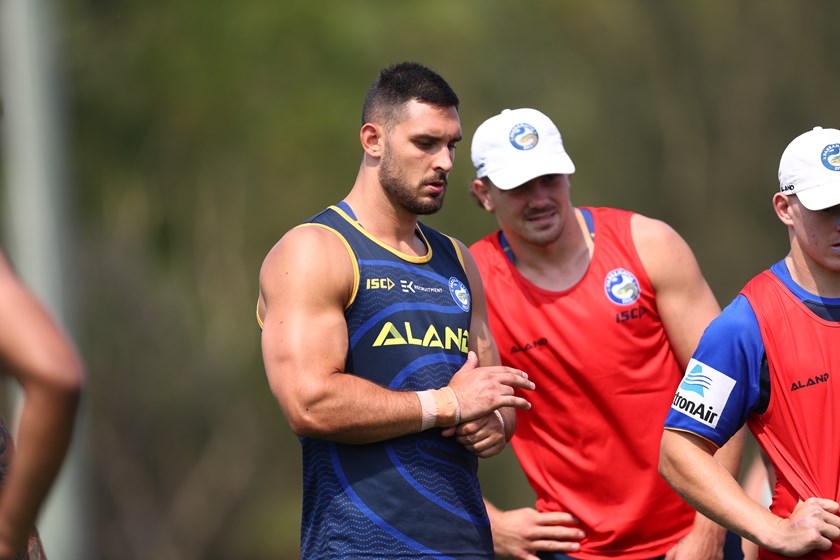 These metres aren’t trundling hit-ups. In his eight games this season, Mr Biceps has accumulated 478 post contact metres, which is just on 60 metres per game. Additionally, his 16 offloads places him in the top 10 in the NRL despite not playing all games and despite starting off the bench.

His efforts aren’t limited to carrying the ball. Defensively, he’s been more than reliable, returning a tackle efficiency of 93.2%.

Statistically, it’s been a brilliant start to the season, but the eye test is even more telling.

During a period in which the Eels bench has missed the attacking impact of Marata Niukore, Ryan Matterson has filled the breach, and done so with a difference.

Whilst Niukore is a lethal mix of power and intimidation, Matterson has proved difficult for defences to bring down through the middle, and continually threatens to find an offload. When switched to an edge, he’s run good lines and rediscovered his step.

Over the last six weeks or so, Matterson has been close to the best on field, whether it be on a winning or losing Eels team. His consistency hasn’t been dependent on those around him.

It’s obvious that the Eels junior has regained the confidence apparently lost during a sequence of nasty head knocks.

This has placed the Eels in an unexpected position.

The 2021 version of Ryan Matterson was a player at the crossroads. His immediate future seemed clouded. Concussion issues had restricted him to just 17 appearances and it wasn’t his first dance with head knocks.

To be honest, many supporters (myself included) wouldn’t have been surprised had the 27 year old decided to retire. The last thing expected, or even demanded by fans, was for Parra to extend him on either similar or upgraded coin.

The 194cm, 107kg forward is proving to be one of the Eels most valuable players on literally a weekly basis.

Suddenly, Ryan Matterson has become a valuable commodity, and reportedly attracting offers from rival clubs, including the Dolphins.

It was recently revealed that the Eels had opened up negotiations to retain Matto, but the club has a track record of not offering a contract which exceeds what they consider a player to be worth.

This strategy has kept the club cap compliant, and they’ve had success with BA and his coaching staff being able to develop and get good returns from “bargain” recruits or local products.

Simultaneously, the club has aimed to lock in key individuals such as Junior, RCG and Gutho on market competitive contracts. A new challenge will soon emerge as the Eels match-winning halves combination of Mitch Moses and Dylan Brown will be open to offers come November.

How will this impact negotiations with Matterson? 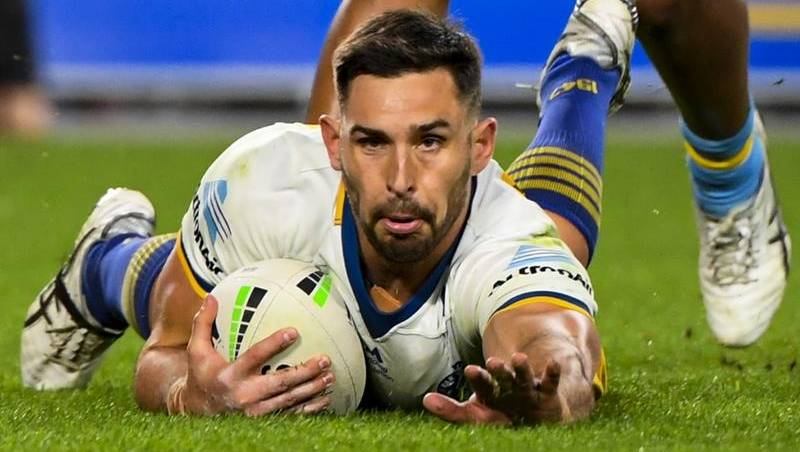 I’m concerned that it will overshadow or diminish the importance of his retention.

I welcome having a club that doesn’t leak details of contract talks. We can assume that negotiations are underway but their progress won’t be revealed from within.

That said, given the upcoming departures and the form of Matterson, a competitive offer must be tabled.

The alternative would be for the Eels to go into the market place to secure a replacement player, a move that might deliver an unexpected gem (see Papali’i) or an individual who is incapable of reaching Matto’s standard.

A reason for predicting such polar opposite results is the recruitment trend of seeking value for the dollar. The cost of retentions and upgrades has unquestionably resulted in the Eels failing to secure high profile targets over the last three seasons.

There’s a great quote from Wayne Bennett that is something like “if you start listening to the fans, you’ll be sitting with them.” It’s a Gibsonesque observation that’s basically stating that the business of football needs to be left to the professionals.

In much the same way, we have to trust the professionals at the Eels.

However, all of the current evidence points towards the high value of Ryan Matterson, and that’s in a forward pack not yet impacted by departures. Should he be added to the list of forwards who won’t be wearing the Blue and Gold next year, especially if there are no significant additions, the Eels will surely pay a price.

For a club that has made such great strides in recent seasons, that would be a disappointing outcome.

This is such a difficult situation. On the one hand you cannot argue with the form or most notably the effort and impact Matto is making. Is this a result of returning confidence or is it final contract year focus.

I hope it’s the former and he sticks around!

The hard part really is deciding where he fits and how long and well he does. Matto, has been somewhat polarizing regarding his arriving back at the eels following the drama’s about where he wanted to play, there was a disagreement between him and BA, that led him to the chooks, then tigers and finally wanting out and return to the eels. As a player that he thought was best spot for him, showed up that in the scheme and distance of the call, BA was proved right in the fact that he was a forward and not a back… Read more »

I’ve had the opportunity to listen to him speak with students. One of the best at communicating important messages.

Great Read 60’s and well done; it makes sense and it is a balancing act; to me you lock up your key spine and prop/s and go from there. Its a system Melbourne did for yrs but they also had a star spine.

We can see and understanding a big picture, but moments like this remain challenging. As I said, there is always a cost – if you release someone they still have to be replaced. Should we be content with a bargain purchase or upgrade, or should there be a priority placed on Matto?

He is a priority for me mate but not at ridiculous coin; but he does play big mins and he is also playing a varied role, so i would upgrade him a bit, and then bring on some other backrower as we are losing some guys with 2-4 yrs of NRL experience or so ( Niukore / Pap/ Kaufusi). For me we need another back up backrower from elsewhere – even Pommy land.

I would look at Andrew Davey for a few years.

Love Matterson including tonight. Would be disappointed should he leave.

Fan favourite, sometimes you just have to dig a little deeper.

That is Eels culture that we are working with here

One of the few that made his way around the ground to thank fans post match.

Matto should be a priority. Pay him what he is worth, not what we can afford. It is no coincidence that Mitch and Dylan are in career best form, a lot of it is on the back of Mattersons work. Penisini is another priority, I’ve got a sneaky suspicion the chooks will be chasing him, and I think they will use Suali as the sweetener.

Not sure but I think he just RE-signed Suali.

I like your thinking…….but it’s flawed. ….our issued caps hardly fit adult heads….. Let alone competing against sombreros and uncle Nick. We have next to no chance to reverse the flow.

Definitely what we should try.

Delighted to see Matto’s form this year. As you suggest, he’s been a standout in recent games, must be in the SoO selection discussion.
And a Parra junior to boot, he’s come home so to speak – so there’s a degree of loyalty that comes with that.
There’s a balance to be struck, is it contract form, the risk of another head knock and the lure of $ if another club wants him more.
Happy to leave that one with O’Neill but hoping he stays.
DDay

Given the loss of the others mentioned makes it even more critical. We are a better team with him in it. Makes it a simple equation for the bean counters, find a few more beans. I also think the dip in form of Nath Brown also has to be a consideration to getting this done

Agree, particularly with N.Brown point, anyone got an idea on why he’s struggling? Is he injured again?

Yes, he’s hit form and is a valuable team member. Salary cap, money,skill base, club affiliation( a whitewashed expression for loyalty),agent agenda, position/s played,roster balance – a mix that just gets me scratching my head. Throw in the Dolphins this year.
Throw in cap rorting and dubious practice. I’m shot, who knows?

The crux in all of this is the big question? How do we fill the holes left by 6/7 NRL players leaving at the end of 2022. Matto is operating in that he effectively replaces Ice as a taller version of someone who can fill middle/edge as needed. watched reserve grade yesterday, and there doesn’t appear anyone too ready to step up into an NRL forwards role except El Zakhim, Russell was possibly best on field and Sivo patently short of a run. The key is replacing those leaving to ensure the opportunity to remain a strong contender and hopefully… Read more »

Mr Sixties, we had a brief discussion about Matterson a month or two back and it was agreed he should consider his health first. Two serious head knocks that took a while to overcome. Particularly, that hit from Packer. If Matterson can get through the season without another serious knock then we should endeavor to meet his asking price. Sometimes we should ask does a player if he really wants to stay. Yes! Then there is room to compromise. Thirty players and $9 million someone has to be cheap – who? We can’t sign them all and players need to… Read more »