The final regulation round of the 2022 Junior Representatives has arrived and the Parramatta Eels will be hosting the Canberra Raiders at Kellyville Park. The SG Ball will be playing their final game of the year but for the postseason bound Tarsha Gale and Harold Matthews, big wins today can heavily impact potential seedings for next week.

With myself still locked away in quarantine until the new week, Sixties will take over update duties for all three games starting with the Tarsha Gale at 11:30AM. The Harold Matthews will kickoff at 1:00PM with the SG Ball to follow at 2:30PM.

And we’re underway with Parra kicking off.

A huge charge from Summah Terrare sets the Eels deep in attack and from the next set Tahleisha Maeva charges over.

The wet conditions are leading to some handling issues.

Massive break from Jacinta Tui and she goes 40 metres before being brought down and losing the ball.

Ruby Jean Kennard absolutely smashes through the Raiders defence who are then penalised for a slow peel. The ball goes left to Rose Beckett who slices through for the Try.

The Raiders can’t handle the Eels power and Parra earn a penalty off the kick off set.

Parra earn a line drop out and play is soon on the Raiders line. Kasey Quye feeds a short ball to Kennard who crashes over.

The Eels hold out a Raiders set the force an error from the visitors on the kick. They work a scrum play involving a wrap around with Kennard but Debbie Doueihi is stopped just short. From the play the ball Petesa Lio gets over from close range. Wide conversion is nailed by Bell.

After defending their line the Eels match downfield and are deep in the Raiders red zone. Petalina Atoa charges onto the ball from short range and is just too powerful to hold out.

I’ve barely had time to finish the last update as Parra earn a penalty from the kick off set. They’re already in the Raiders quarter and Atoa is hungry for another try! Once more they can’t hold out her charge.

The Raiders finally get possession and field position and launch a variety of crash plays on the Eels line. Parra’s defence is well up to the task and force the six tackle turn over.

It’s the last tackle and the Eels hoist a well placed bomb which the Raiders fumble. Tui swiftly swoops on the loose ball and scores in the corner. Converted by Bell

Parra work play back downfield and this time Lio wants to add to her tally and she eviscerates the defence to cross to the right of the posts. 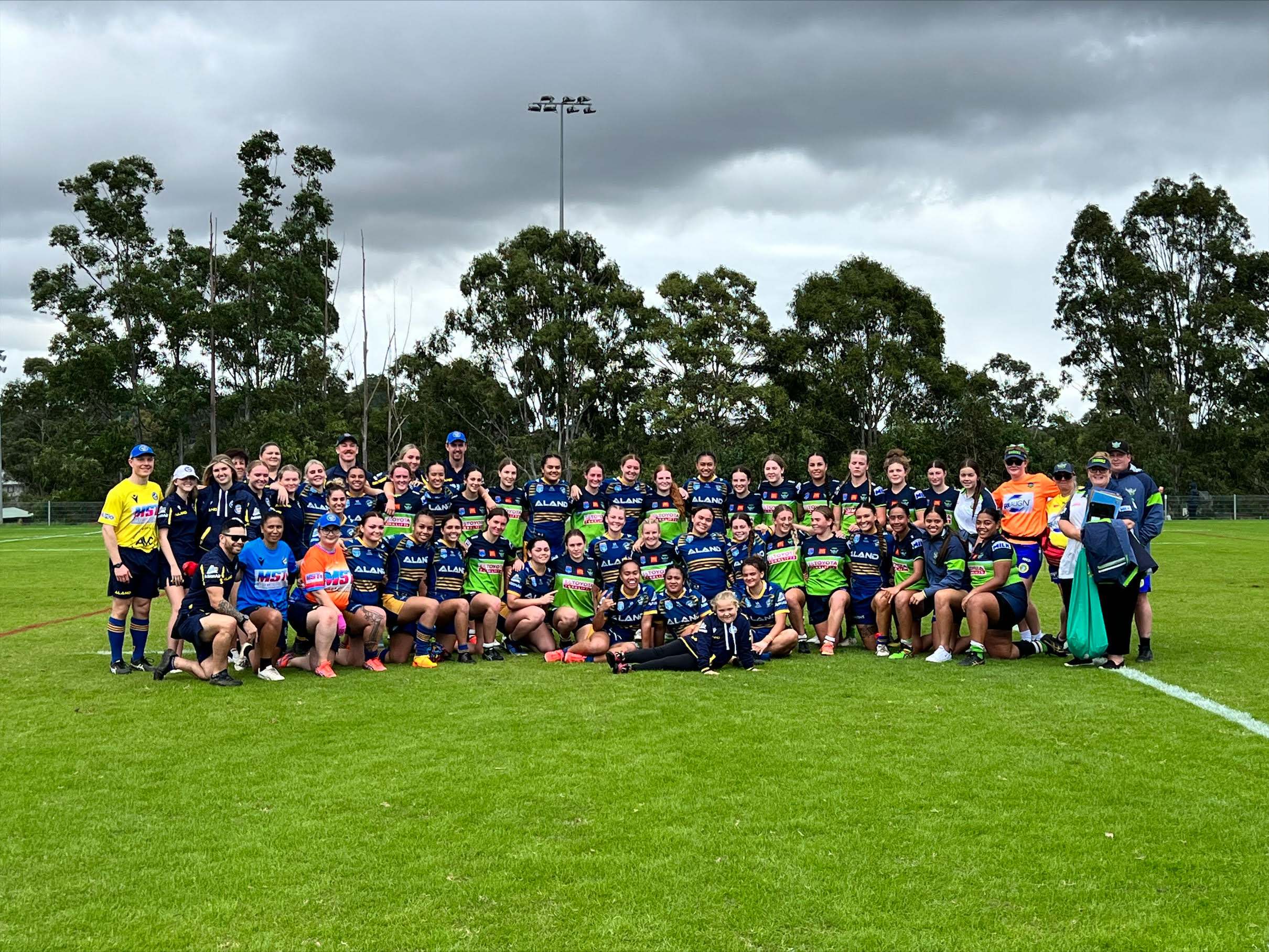 How good is this. Both teams come together for a post match photo.

Plays under way. This is a huge Raiders team. The Eels get a penalty but the kick for touch grubbers along the ground and the Raiders go on the attack. Parra hold them out then get piggy back penalties to attack the Raiders line. The ebb and flow continues as the Raiders defend their line then get a repeat set off the last tackle kick.

Parra hold them out then match downfield and once again great Raiders defence is followed by repeat possession via a penalty to the visitors. Another repeat set follows an Eels knock down and the pressure continues via a mid field scrum in the Eels quarter. The Raiders  go left and score off the scrum. Conversion missed

The Eels have possession and pepper the Raiders line with crash plays. The ball is lost on the 5th and a penalty to the Raiders relieves all the pressure.

The penalties are flowing in this game and I’m losing count. The Raiders are in the Eels quarter via another call and they hit a crash ball under the posts. Somehow they ground the ball despite the attention of 3 or 4 defenders.
Raiders 10 Eels 0 (about 20 gone)

The pea in the whistle is in serious danger here as the Raiders get yet another call.

This time the Eels get a penalty but the kick again fails to find touch. The Raiders turn it over and the Eels get another penalty. This time they tap and run and Matt Arthur delivers a  superb short ball to Jordan Uta who crashes over.

The Raiders are penalised in possession and the Eels have the ball in the Raiders quarter. A late offload finds Sam Tuivaiti right on the line and he plants the ball for the equaliser.
conversion hits the post but goes through.

The Eels have paid the penalty for not getting to the kick from the kick off set. From the scrum  the Raiders get over near the posts.

The Raiders now get the penalty from the restart. It seems like there’s been a penalty blown every two minutes. And just as I type that Parra get possession and then a penalty

Here’s a surprise – the Raiders get possession and then the obligatory penalty. This is becoming monotonous.

The Eels complete a set and a line drop out. The Eels keep it simple and work play towards the line. Parra get a penalty and Arthur catches the defence napping with a quick tap and run and dives through for the try.’

The Eels get a penalty but play out an awful set. The Raiders break the line and earn a penalty for an Eels lifting tackle.

The Raiders catch the Eels short on the left and the try is on.
Luke Maroun goes for the intercept and grabs it. He races 90 metres for the try.

The touchie looks to have got a 40/20 wrong but the Eels hold them out and force an error on the last.

Parra break the line off the scrum and after getting the offload Michael Gabrael steps the fullback but gets tackled from behind.

Zaidus Muagututia sends the ball wide and Dom Farrugia scores in the corner. 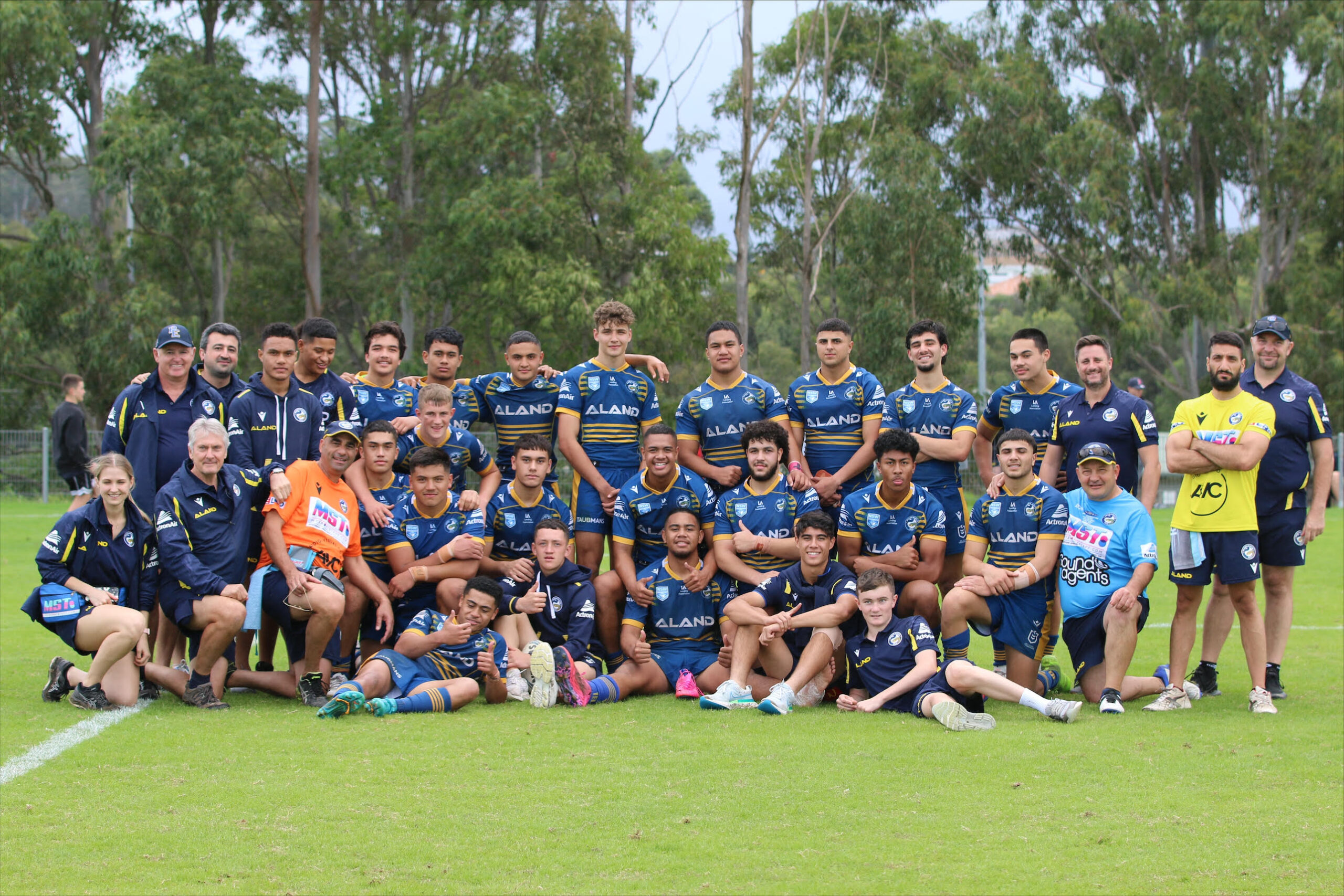 The Raiders get the first genuine shot at the line and put in the grubber kick on the last. I’m the race for the ball they ground it just inside the dead ball line.

The Eels get repeat possessions via penalties in the Raiders half. The ball finds Mark Simon on a crash play and he forces it next to the posts

The Raiders are on the attack in the Eels quarter. They’ve got Parra for numbers as they work it left. Parra jam so the visitors throw the harbour bridge pass and score in the corner.

The Raiders look to have scored but the ref penalises them for obstruction. Another for Parra has them camped on the Raiders line. A crash play to Markus Atoa and he drops the ball back to Jacob Davis who scores between the posts. Conversion by De Stradis

A big step from Terrence Lafai and he cracks the line open and sprints towards the posts. The cover smashes him from behind and he loses possession.

The half time siren has blown and the Raiders opt for a kick. It takes a deflection and they fall on it but are ruled offside. The Eels opt to kick for goal from 45 metres out and right in front. Dom de Stradis nails it.

Underway and the Eels get possession on half way via a charge down.

The Raiders hold on and advance the ball downfield via a penalty. They hit their right and Parra’s defence opens up for them to score.

Yet another Eels charge down gives them midfield possession. The pummel the Raiders line and Ibrahim Fakhri won’t be denied.

The Eels lose possession from the restart and the Raiders deliver the pain. The shift to their right comes up trumps again.
Conversion unsuccessful

That’s a big play from Declan Murray. He chases a grubber into the in goal and plants it just inside the dead ball line. Converted by De Stradis

Eels errors are again costly. A stray Eels pass is picked up by the Raiders and they get repeat possessions via penalties. The pressure is too much for the Eels and they concede a converted try.

That could be it.

The Raiders throw up a bomb and their chaser is allowed to catch it uncontested. He pulls out of the grip of Eels defenders and gallops to the line.

One last play from the Eels and they regather the kick in front of the posts. As the ball is about to be planted it comes free and the siren sounds.

Curiosity question Forty. Is Debbie Doueihi related to Adam Doueihi from the Tigers?

John, from memory I don’t think she is. Hurry up and get well Forty. This live updates caper is not my go! 🤣