What value do you place on a first grade debut?

There’s unquestionably lessons learned on the field, but what about the mindset?

Last week, I gave a special mention to Sam Loizou for some standout moments in the defensive drills. On Monday, he caught the eye pushing to the front in conditioning runs.

Similarly, Ky Rodwell looks to be thriving at the start of his first Eels NRL preseason. His outstanding NSW Cup form earned him a spot against the Panthers in the final round, and he did that without the benefit of an intense preseason.

I won’t read too much into what this means for either player in the upcoming season. Rather, I mention it because having a taste of NRL can light the flame of ambition, or even the belief that you belong there.

Last year we witnessed other first grade debuts. Like Ky and Sam, Will Penisini, Sean Russell, Jake Arthur and Makahesi Makatoa all played their first game in the top grade. I’ll be monitoring how that accelerates their development. 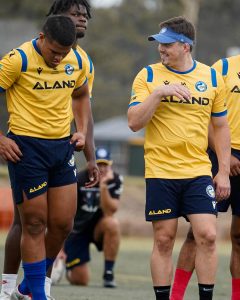 From an entire group perspective, early feedback is that the squad has returned in impressive shape. This is indicative that this younger group are not taking their opportunity lightly and have maintained or improved their fitness during the off-season. Whether this will also be true of the senior players when they return is yet to be seen.

Today I was asked whether Dylan Brown has bulked up. Though I can’t answer that he certainly doesn’t look any smaller and he’s still one of the best conditioned players.

Speaking of conditioning, Monday’s field session began with some running mechanics that eventually led to longer and repeated sprints. During these, the squad was grouped as either forwards or backs.

Of the backs, Dylan Brown, Jake Arthur and Haze Dunster consistently placed themselves at the front of the group. For the forwards, Makahesi Makatoa and Ray Stone seemed to be busting their proverbial to get near the front. Mr 3:16 even placed himself on the outside of the starting line, meaning he had further to run when the players were still across the track on a bend.

Once again, the running made way for footy with the squad taken through sets from a kick off. With new players in the squad, there are basic calls and roles to be learnt. 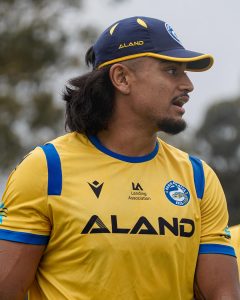 Paul McGregor and Simon Woolford were in attendance observing the proceedings. At this stage, they too would be familiarising themselves with Parra systems before adding their input, or in Woolford’s case, ensuring the implementation of these systems at the Flegg and pathways levels..

Wednesday’s session seemed to be the inverse of Monday. After warm ups, the early focus was on footy with the conditioning component building as the morning progressed.

Working through sets from scrums, the emphasis was once more on shapes through to the kick. This was done without opposition as the players continued to familiarise themselves with their roles.

Next on the agenda were shapes and options on both sides of the ruck. A defence line was used to add pressure and force decisions. I didn’t mind seeing a few errors during this time. This time of year is a learning process, and with new faces and missing NRL stars, there remains plenty of scope for improvement. 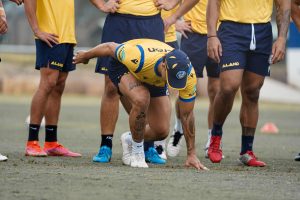 From there, the squad transitioned into some grid work. Like all footy teams, the Eels have a variety of ball playing drills that they execute in corridors or grids. During the season, the footy essentials of drawing and passing, and playing what’s in front, are practised in most sessions. Often times there’s a bit of rivalry involved, and Moses and Gutho always find a way to be in opposing groups.

Whilst the King and the Prince are yet to kick off their preseasons, today’s work still resulted in a bit of banter and a fair share of praise from the coaches.

The morning concluded with Trent Elkin adding to today’s kilometres with the repeated up and back defensive line movements. Though not quite the same as “Malcolms”, the short distances covered and the movement up and down off the turf mimic some of the conditioning demands of defending.

Thanks Sixties for the wrap of the training thus far. It’s always looked forward to.
Cheers

Sixtes great stuff to read at this point of the season, good to see Reed in the squad, and hopefully will be for a long session.

Is it possible to have photo’s of the players especially the newer faces put up on the site?

One extra question, Ryan Carr is he still coaching the Knock on team?

Colin, I believe that the club will be looking to add names to photos. I believe you can right click on photos to get so.
Yes Carr is still on the staff. I’m very pleased about that

Thanks sixties, right click did not work, so look forward to the names.

I’m also glad that Ryan is still with us, adds very much to the coaching staff.

From what you saw today, which players are the quickest over 30m and 100m? Has JA been bulking up and gained any speed?

I’m guessing Dylan is faster than most. Scored a try last year and he showed kenny like speed.

It wasn’t ideal for speed comparison, and when you have repeated sprints, the best conditioned rather than the fastest start to come to the fore. The shorter distances were in smaller groups whilst the 100m or more were in larger groups, making it harder to judge. However, I’d probably nominate Dylan for both. Jake Arthur is surprisingly fast over 100m. Brendan Hands has a bit of toe too. And as I mentioned, Ray Stone can move well for a forward that people rarely speak of in terms of pace – though I should remind people of his try this year… Read more »

From the pics and video available there are a few unfamiliar faces which is awesome, to be able to see the progression into first grade regulars is always exciting.

This is one of the parts that makes preseason the most fascinating. When Reed Mahoney did his first preseason, he was a train and trialer who just kept saying “watch me” in every session. Dylan’s first preseason had me convinced that either Norman or Moses was about to make way. That doesn’t happen with every preseason but as you say, last year we witnessed a few debuts for first season youngsters.

Great read sixties , do you think ,either tonight mataele or luca moretti have similar mobility as niukore , to play simpler style ,or bit early to tell, cheers

Ken, I can’t make that call just yet. I like to judge that in a footy context. Both of those fellas have different builds, and I need a lot more time of watching them. I’ll probably refrain from that until some serious opposed work commences, and I start seeing them run some lines.

How are the new hookers going ? Names and faces of the new players would be great

I rely on Eels media photos for close ups. I think you’ll start to see more of that. The hookers in this younger group are Hands and Yates. Both are very fit. I’ll make a call on their skills and service when opposed sessions kick in.

Thanks Sixties, you are without doubt a very reliable and consistent parra man.

Very kind mate. Just a supporter like everyone else here.

How is Wiremu Greg looking?

He’s one to watch isn’t he. His first preseason with us and I don’t believe he did a full NRL preseason with the Cowboys. I could be wrong but I understand that to be the case. Like any big player he will benefit from the conditioning, and so it’s too early to make any valid assessment. I’ll be monitoring his progress and reporting on that when I feel I can.

Glenn for me he can be a v handy bench player, and some fitness behind him he and Maka etc. can be devastating; just need to get them match fit.

Great read Sixties like always. Lilke others here i will be particualry interetsed to see the depth players put pressure on the squad in key areas; like centre / wing / back row and hooker.
As I have said it will be an interesting list to see who stays beyond 22 etc. and who also comes up.
I am hoping Oregon comes on this year, as he needs to.

Mitch, I believe that Oregon’s importance is high given the impending departures.