The 2021 NRL Indigenous Round is being staged next week as the NRL and its16 clubs set out to honour and recognise the role of the Indigenous community and its athletes in our great game.

The Eels have decided to honour this round with their own home match in what they are calling Ngalawa – Welcome to PARRAdise.

Parramatta will play two matches in their Indigenous jersey, starting with the Bankwest Stadium clash against the Sea Eagles.

I reckon this is one of the most impressive Indigenous jerseys worn by any NRL team. It’s visually captivating with Danielle Mate’s design representing the Parramatta and George’s Rivers, Pemulwuy and his warriors, the Parramatta players, and the connection lines to family, home and culture. 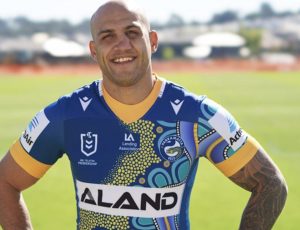 Even without knowing what each feature in the design represents, the jersey is, unmistakably, a Parramatta Eels jersey.

Indigenous Round is an incredibly important part of the NRL calendar. A wealth of talented Indigenous players have graced rugby league’s fields, and the contributions of Aboriginal Australians to the code are legendary.

The likes of Artie Beetson, Cliff Lyons, Laurie Daley, Preston Campbell and Johnathan Thurston are considered to be some of the all time greats of the game, having brought entertainment to the masses and success to their clubs.

As a major Australian sporting code, the NRL has positioned itself as a leader in educating the wider community and assisting in the journey towards eliminating racism. Sport connects people, and rugby league is an avenue to important conversations.

Last year the NRL published a list 62 Indigenous players and the First Nations People with which they identify. Impressively, that amounted to almost 13% of NRL players having Indigenous heritage.

The Parramatta NRL Club is readily recognised for its link to Aboriginal people. Taken as an anglicised version of the Dharug name Burramada or Burramatta, Parramatta refers to either “place of the eels” or “place where the eels lie”.

The traditional owners of the land, the Burramattagal, are a clan of the Darug people and the eel is their totem. With its location on the point of the river where fresh water and salt water met, Burramada (Burramatta) was an important gathering place for indigenous people.

This time every year, I publish my Parramatta “Dream Team” as a way for TCT to recognise some of the talented Aboriginal players who’ve donned the famous Blue and Gold jersey.

Not much has changed since last year’s listing, just a couple of tweaks, but revisiting that list of players reminds me of how blessed the Eels have been when it comes to Indigenous players who have worn the Blue and Gold.

Of course, the listing can only apply to players that I’ve watched during my lifetime following the Eels, and it’s merely my opinion.

I’ll be interested if any readers can identify Indigenous players that I might have overlooked. As always, debate over my selections is naturally welcomed.

During his time at Parra, French earned plaudits for his freakish try scoring ability. His selection in the 2017 Indigenous All Stars team marked his early impact on the NRL. After being on the Eels radar for a 2020 return, Bevan continues to ply his trade in the ESL.

Fergy Ferg! After a less than memorable 2020, the popular winger is back in form in 2021. Origin star, Australian rep, Premiership winner and proudly Indigenous All-Star – the powerful Eels winger has done it all and been one of the NRL’s “characters” on that journey. He can now add “scored one of the greatest tries that wasn’t” to his CV. 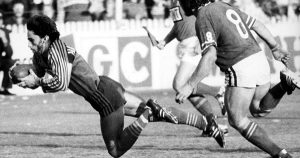 Steve Ella crosses for a try

It’s probably impossible to adequately summarise the career and contributions of Steve Ella. Local junior, premiership winner, Origin star, Kangaroo, Eels legend. Zip Zip had the ability to change direction without losing pace. Ella is another Indigenous star who has proudly gone on to work with the Aboriginal community. TCT is honoured to have Steve as our guest for this Sunday’s live appearance at Parra Leagues.

Recruited from the Newcastle club, Tahu had two stints with the Eels that were punctuated by his foray into rugby union. Blessed with both power and pace, the talented three quarter was a handful for opposition defences. An Origin star, Tahu also had the distinction of being a dual international.

Corey Norman always seemed to be on the cusp of Origin selection, and after leaving the Eels he finally achieved that honour. Though his last year at Parra wasn’t indicative of his best football, he was one of the most naturally talented players to have represented the Eels during the last decade.

Once praised by Brian Smith as the smartest player he had coached, Simon validated that judgement by earning Origin and Australian honours during his career. The talented half was part of Parramatta’s revival in the early years of Smith’s coaching tenure in the late 1990s. The solidly built Simon had exceptional kicking skills and deceptive pace. Plenty of Eels fans were disappointed when he was moved on.

The 2004 Ken Stephens Award winner joined the Eels from the Roosters in 2002. The highly skilled back rower became renowned for his creativity and deceptive pace. A Country Origin and Prime Ministers 13 representative, Widders has also received deserved praise for his services to Aboriginal education.

What a crowd favourite this big fella was at Parramatta Stadium! Although primarily a prop, I’ve selected “Tooks” in the back row. Recruited from the now defunct Crushers in 1998, Tookey made his name as an impact player during his 40 appearances with the Eels. I believe it’s a very trim version of Tookey that people would meet these days.

Peats’ courageous play for the Eels earned him a legion of Blue & Gold fans. A tenacious defender renowned for his line speed, his performances were rewarded with City jerseys, Indigenous All Star appearances and a Blues Origin hooking spot. 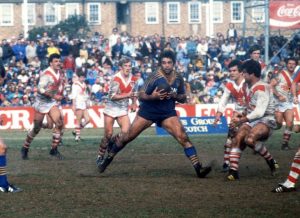 What an honour it is to be able to name one of rugby league’s immortals in this Parramatta list. Artie Beetson was the master of what is now referred to as second phase play. Although he joined the Eels towards the end of his illustrious career, the mercurial forward could still mesmerise the Cumberland crowd with his ability to offload the ball in traffic. Selected from Parramatta for the inaugural Origin match, his “interaction” with Eels team mate Mick Cronin really kick started the “mate against mate” folklore of Origin footy.

Webb doesn’t earn his spot on the list via his limited appearances with the Eels. However, he earned 15 Origin jerseys, made a test appearance for Australia and appeared in two Indigenous All Star matches. His time with the Eels may be less than memorable, but in his prime he was a very, very good forward.

Carl is currently battling serious health issues and our thoughts are with him.

John played with the Eels from 1969 to 1976 and was a fast, hard running second rower who was also used to great effect out on the wing.

This recruit from Newcastle made the 2002 Origin team on the back of his strong form with the Eels. A member of the record breaking 2001 Parramatta side, the tall and pacy winger was the ideal finisher for a team renowned for its attacking prowess. 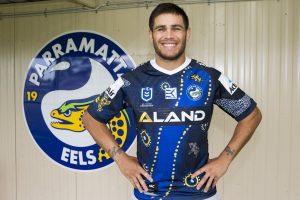 Over the years, the versatile Smith has moved closer to a starting spot in this team. However, Wilbur’s ability to cover virtually every backline position, on top of the dummy half role or even lock make him the ideal interchange player. His pace sets him as one of the fastest at the club, and despite his light frame, he’s capable of producing some big shots in

There were some other fine players from the past that didn’t make my team, and it’s important to acknowledge them. Chris Sandow, and PJ Marsh certainly had claims for inclusion in the top 17.

It was difficult to omit Willie Tonga in the selection battle with David Liddiard. Tonga was an Origin star and Australian representative, though he reached those heights after departing the Eels. He wouldn’t let this team down.

Josh Hoffman played in every backline position. He also lists Indigenous All Star representation on his resume.

As Australians, we are fortunate to live in a country which is home to the oldest continuing culture in the world – the Aboriginal and Torres Strait Islands people.

Amy team that leaves Dennis Moran out is a let down.

Understood Offside, and he was an exciting player. Have a crack at your top 17 – keen to see another opinion.

No one who saw some of those players, going from the Zip Zip to hearing the slow drawl and crow from around the ground of TOOOOOOOK can not be unimpressed with any of those on the list, not a bad few on the bench either sixties.

All the talk recently relating to Ado Carr’s 6 try feast bought back memories of our own great, Steve Ella, who once scored 7 trys playing for The Kangaroos against a French Team while on tour. I seem to recall he played fullback in that match. As Joey Johns often says, “What a Player”!

I don’t recall that 7 tries Gazza, but he did score four tries from fullback when playing for Australia vs Wales.

Well done Gazza! My fault for only thinking about test matches. I will definitely be using that in my questions to Zip on Sunday at Parra Leagues.

Great stuff mate boy what a team, i’m looking forward to catching up with my old mate Steve Ella on Sunday see you then Craig.

I’m definitely looking forward to it too Joe.

Tks sixties. Do you have a translation of N’Allawah?

As a club we have had some wonderful Indigenous talent play for us. Last year I wrote to Aland about NOT having their brand plastered over this special commemorative jersey – I reckon they could (and the other jumper sponsors as well) gain greater ‘advertising’ by paying their respects to Indigenous culture with an advert free jersey.

Surprise, surprise, I didn’t even get an acknowledgement of my correspondence. I love this year’s jersey but it is spoilt for mine by the ALAND plastered across it – even something more discreet would have shown greater respect.

I’ll make a slightly different suggestion. Perhaps all NRL clubs could align with an Indigenous community group for the round and carry that name on the jersey.

Well done mate!! I’d probably have PJ Marsh or Dennis Moran at hooker. I’d also have Jason Moodie on the wing and shift David Liddiard to FB (he played plenty there for Parra and throughout his career). Can’t complain about your choices though

Lesh go eels. I believe in ya