From the time that Michael Jennings’ NRL future became tenuous, the focus on his likely replacement at Parra hasn’t waned.

A myriad of opinions on potential signings or selections have been offered, and everyone, punters and paid scribes, have tried to validate their suggestions.

For the time being, suggesting anyone beyond those under contract is fanciful.

With that in mind, the bloke in the box seat is Tom Opacic – and his place at the head of the queue was emphasised in today’s opposed work. 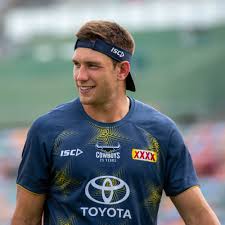 Opacic during his Cowboys days

Positioned on Jenko’s preferred left side beside Maika Sivo, the former Bronco and Cowboy was very vocal, especially in defence, and made a number of smart decisions with his positioning and movements.

In one notable moment, a shift to the right saw Shaun Lane odds on to score, only for Opacic to hold him up over the line. The praise for his effort was deserved.

This description of defensive prowess on the training track would come as no surprise to those who have long touted him as a sound defender. His work in attack is probably the greatest question mark, but given the Eels previous interest in him when he was at the Broncos, they must rate what he can offer.

The other player warranting a mention today is Jordan Rankin. A couple of TCT readers have been asking about his contributions to the club since joining last year as a mid-season signing. Obviously his opportunities to impress were minimal in a 2020 season that didn’t feature the Canterbury Cup.

Unquestionably, the journeyman is one of the fittest players on the Eels list. This morning, he challenged and defeated Jake Arthur in a number of the conditioning runs – and the young half had been doing his best impersonation of Gutho up to this point. 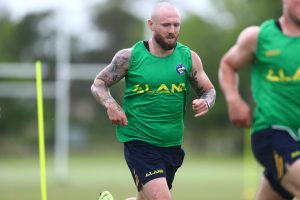 Rankin could arguably fill most backline positions, though he is looked at as a spine player. He has played as fullback in opposed sessions and joins the Andrew Johns group for spine training.

For the squad as a whole, today’s kilometres were added early as they alternated between standard running and a particularly innovative game.

When it came to the running, outside of the contest up front between Arthur and Rankin, the usual suspects such as Dylan Brown, Will Smith, Haze Dunster, and Bryce Cartwright continued to set conditioning standards.

It took a while for spectators to determine the rules of the aforementioned game. It was non-stop running, and I’ve since wondered whether some of the concept was founded in AFL or netball.

Though no kicking was involved, the players seemed to be assigned an individual opponent. It also appeared that when their team was in possession, players could only be tagged by their assigned opponent. It was also apparent that forward passes were permitted.

Consequently, players were looking to get themselves into the action whilst also attempting to lose their opponent. As a spectator you could either follow the ball or watch the “off the ball” contests. This was fun stuff that kept the players engaged, on the move, looking to find space and looking for support. It probably exercised their peripheral vision too.

An unexpected star of the game was one Mr 3:16 – Ray Stone. The Axe was in the thick of the attacking action crossing for at least three tries, including an entertaining charge to the line when he turned his defender inside out with multiple changes of direction. 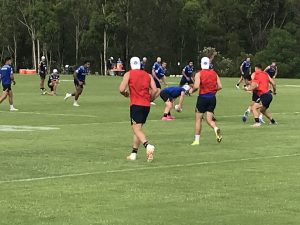 The Blues on the attack

The back half of the session featured contact opposed work. The squad was again split into Red vs Blue with the “talent” divided between the teams.

When in possession, each team would move the ball downfield through an unopposed standard set, before receiving a repeat set from a line drop out. This started the contact opposed work, deep in attack. Just like any game of rugby league, they only had one set on the attack to score, unless they could force a genuine repeat set.

Despite some challenging plays, defence seemed to win the day. The only try awarded came from Maika Sivo chasing and grounding a Moses grubber kick to the in-goal.

Perhaps defence was actually the order of the day given that the session concluded with line speed drills and individual contact contests.

The countdown has begun.

Thanks Sixties, awesome read. Hopefully Tom is the player we need (for now) really hope Jenko gets the all clear soon

Don’t hold your breath Daz. The only users of performance enhancing drugs that have got off in the last 20 years have done all their work for Gai Waterhouse 😉

Thanks for the update Sixties. I’m really looking forward to seeing Tom O get a solid run at it. His performances at the Broncos were very strong, he was pretty well squeezed out due to the depth that they had at the time. The last couple of years haven’t been as great but it is tough playing in the centers in a poorly performing team like the cowboys have been over the last two years (remember how Jenko and other backs struggled in 2018). I was hoping we could have picked him up when he left the Broncos but it… Read more »

then keep seeing him at training sixties, lol. good to hear mate

With the players we have and what I am reading and gleaning, dare I suggest that we have enough players as is, and I am confident in reading the reports and saying that. According to the NRL we have to have 30 by end of June, stand correcting on this, but they also need 29 by the start of the season proper. At what point of the year are the development players allowed to play in the NRL team? Reason for the question is that with CC in operation this year, so far, we really should have enough players signed… Read more »

Last year there was no restriction on Dev players but I think it reverts to Round 16 this year Col.

When we signed Jordan Rankin he was coming off a purple patch of form in the Super League. I was curious to see how he went. Interesting to read of his good training ethic, so still curious.

He does go well on the training track. Seems like a smart player.