Round 6 Drink Of Choice – Reschs Pilsener (an old friend’s beverage of choice this week, to be fair)

The result we needed to have. Valiant in defeat. A quality loss. It is so easy to throw out empty platitudes in the wake of an undesirable result because when all is said and done, a loss is simply a loss. In many ways that holds true last night with the Parramatta Eels failing to overcome the NRL juggernaut that is the Sydney Roosters in gut-wrenching 24-10 loss.

The Eels mounted a legitimate challenge to the reigning champions. They had them teetering on the ropes at the 60th minute after unleashing a fearsome barrage of bodies blows in the second half. Then a dagger to the heart. A momentary lapse gave the tri-colours an inch as Luke Keary streaked into open space before sending Boyd Cordner over…and from there they took the proverbial mile. The Sydney Roosters are simply that good. They are the benchmark. The brash, upstart Eels weren’t their equal. There was no fairy-tale finish to the thrilling encounter. Dreams of an unprecedented 6-0 start evaporated into the ether. All Parramatta have to show for their efforts are a pocketful of lint and no silver-lining.

No silver-lining save for the fact that when all is said and done it is only Round 6. Whether you fall in the quality loss camp or not, the most important factor in last night’s loss is that time is on Parramatta’s side. The Roosters may have handed the Eels their first loss of the season but in doing so they reaffirmed how close the blue & gold are to the summit and just what it will take for them to conquer the mountain.

If there ever was a number to perfectly encapsulate how thin your margin of error is when you come at the reigning kings, Reed Mahoney’s tackling efficiency would be it. He was at his scheming best last night as he dissected the back field of the Roosters with both his long and short kicking game. He was a massive factor in blunting the impact of James Tedesco and piled on a game high 56 tackles to comfortably lead either team in defensive work load. It was a mammoth individual effort in which he missed just 2 tackles (with a further 2 ineffective tackles) for an outstanding tackling efficiency of 93.33%.

Only 2 missed tackles. One of which arguably cost the Eels the game when he failed to corral Luke Keary in the 61st minute (Mitchell Moses also has culpability here I believe for an incorrect read), a split-second lapse that allowed the tri-colours to wrest back momentum and control of the game from the Eels. It doesn’t get any crueler than that. That is how razor thin the margin of error is when you reach for the crown.

Well not so much as not shouldering the load as simply not using their shoulders. The Roosters found great success, and arguably their only success barring a bounced pass, in attacking Parramatta’s right edge. Waqa Blake (7 missed tackles, 4 ineffective tackles) had a horror night in defence while Mitchell Moses (5 missed tackles, 4 ineffective tackles) was also uncharacteristically poor with both contributing to a porous defensive formation full of arm-grabbing.

Blake Ferguson and Waqa Blake have both been highlighted in this blog in recent weeks as the most significant weakness for the Eels in defence and the Roosters definitely keyed into that last night. The good news is that schematically Parramatta matched up quite well with what the Roosters threw at them down that edge. There weren’t critical breakdowns that led to easy overlaps – each time the Eels were afforded the opportunity to make tackle in the front line.

The bad news however is that the failures keep happening on a fundamental level. Moses has earned some leeway for his efforts here but Waqa has to make better and more consistent contact in defence – that is non-negotiable. Ferguson’s faults largely stem from Waqa’s mistakes inside but he too hasn’t been blameless in prior games. These issues loom large as the final hurdles towards the Eels assembling a premiership calibre defence and I have no doubts that Brad Arthur and David Kidwell will be working tirelessly to rectify them.

Side note – Ryan Matterson earned exemption from criticism here after grinding out 45 tackles with just 2 missed and 2 ineffective in another quality effort from the towering backrower.

Challenges of the challenge

Teams across the competition are struggling to optimally deploy the captain’s challenge and the Eels are no exception here. They were left to rue a squandered challenge in the early exchanges of the game following a knock-on from Michael Jennings that left them powerless to contest dubious rulings in lost possessions of Raymond Stone (ruled a knock-on against Parramatta) and Jared Waerea-Hargreaves (ruled a penalty against Parramatta) at crucial junctures in the first half and second half respectively.

I don’t think there is, or ever will be, an exact science on when to pull the trigger on the captain’s challenge but it was definitely wasted by Clinton Gutherson last night and the ripples it had on the game were palpable. The Roosters were able to push the limits in the ruck and forced Ben Cummins into a handful of incorrect calls and Parramatta were left with no recourse but to wear it on the chin.

Simplistically, it might just be better to leave the challenge in the captain’s pocket until the second half unless there is a particularly egregious missed call early on. The odds of fatigue clouding the referee’s judgement in the second half seem better than rolling the dice on a miracle overturned decision early on.

While they have fallen short of upsetting the reigning premiers, the Eels did create a truly iconic moment when Maika Sivo delivered a thunderous knockout blow to James Tedesco en-route to scoring a rousing try. It is easy to forget the silky lead-up work of Michael Jennings to create the window for Maika to operate in but it encapsulated everything amazing about Parramatta’s veteran centre.

Then again, whenever you see the game’s best player gets flat-out Jonah Lomu-ed it is almost impossible to remember anything else. Thankfully ‘Teddy’ seems to be okay but Maika Sivo’s brutalistic show of raw power and stunning athleticism harkens right to the heart of the gladiatorial appeal of rugby league. What an amazing moment in a battle between two heavyweight teams.

I am not sure if he remembers Sivo’s booming carry itself but Tedesco is at least cognisant of the fact the he is about to trend worldwide for all the wrong reasons! 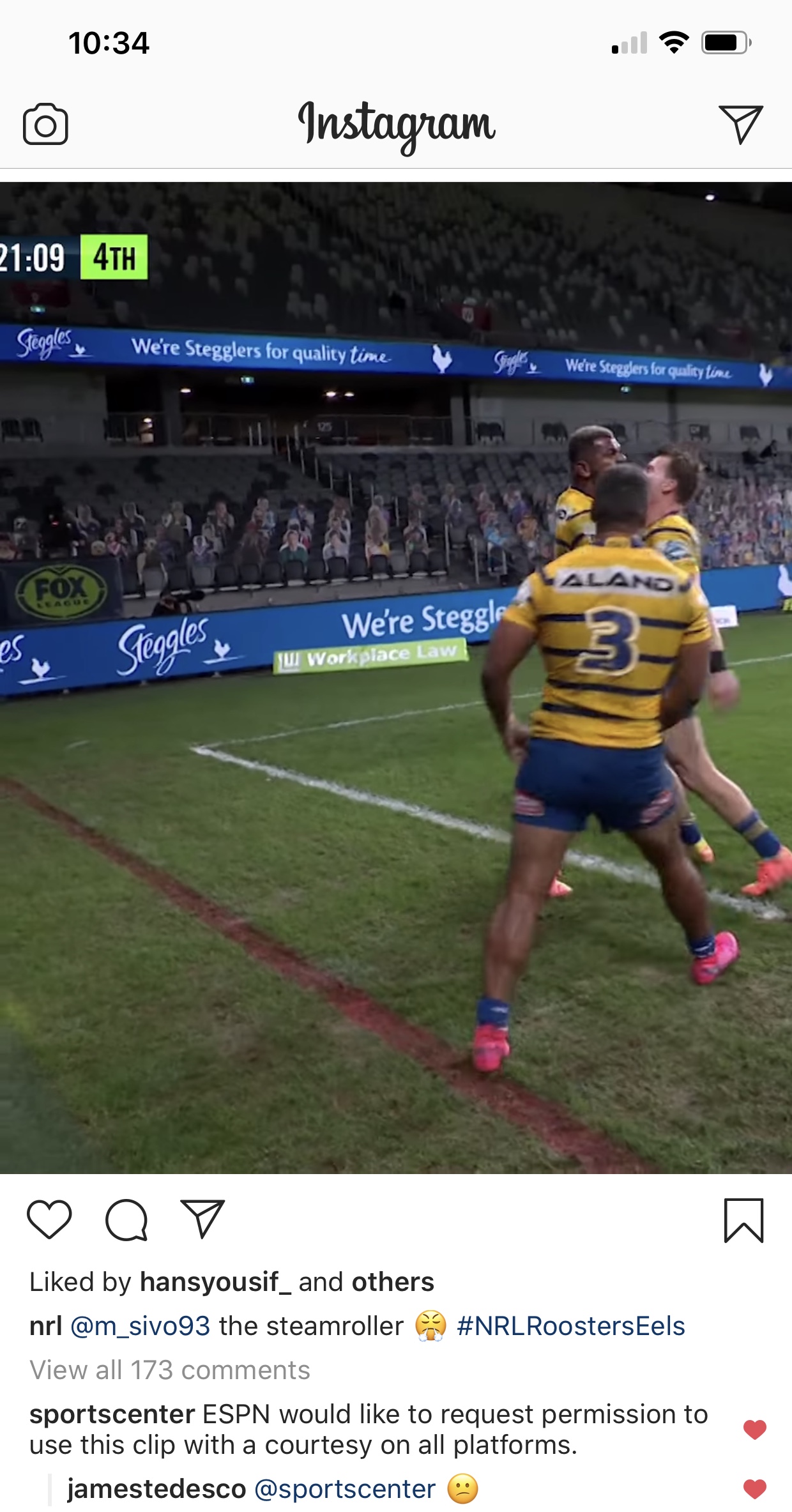 Everyone loves a good superhero origin story. Ironman, Batman Begins, Shazam, Round 6 vs Sydney Roosters, you know the usual Hollywood fare. One of those might not be like the others but hopefully last night’s loss will be the making of Oregon Kaufusi as he led the way from the interchange bench for the Eels. Kaufusi has clearly grown in physical stature since 2019, threatening to offload with nearly ever carry against the Roosters (even if he netted 0 total offloads on the night), and should be considered Kane Evan’s offsider on the bench moving forwards.

It stings that 6-0 will have to wait for another season. It pisses me off that the Roosters were able to run up the score when Michael Jennings was sent to the sin-bin in the final 10-minutes of play. It was a garbage finish to an awesome spectacle and should be fuel for the Eels moving forwards. The Roosters will rightfully assume the outright mantle of premiership favouritism from this result and that however does not bother me in the least.

They are the gargantuan monster they are chasing. They are the pinnacle. The benchmark. The standard by which all would-be challengers must surpass. The sit at the summit of a mountain more fearsome than Everest that we are fiendishly scaling. They may have beaten us but we glimpsed that summit in the process. We were found wanting this time but we now know what it takes to beat at their best in the regular season and even more than that, we know that they will be even better when it becomes sudden death footy. We have the team to accomplish the task but we need to stoke the flames of revenge for the better part of four more months.

Bring on the Raiders.

What would N.Brown get if we fight it and lose? The chooks are a terrific team but appear to be choir boys in the eyes of the ref.The tough calls certainly went against us. Sinbinning a player from either side in such an even contest lack’s common sense. That game warranted full sides to the death.

Thorough assessment Forty. That game deserves no less, great lessons. Whilst our stats were ordinary, luck and calls were ordinary as well. Just a few ( but better side over 80 won): Peni’s strip was just an arm swinging into a tackle and clipped the front of the ball. With Ray Stone, he had been tackled,the Roosters player was improving his body position to pin him and intentionally knocked the ball. Moses asked for a professional foul when Morris stripped Matterson on the try line, his case was that Cummins blew a penalty and the other tackler was never going… Read more »

The combination of Keary and Cordner is deadly and proved so again last night.

We have the ability to make fast starts in games but against the better sides not so much.

I think that this is a result of mindset

We proved we can match it with them, but also proved we’ve got some more work to do to get past them. Pretty disappointed by the grading on Brown, I hope we do challenge it for a change. Jake Friend was definitely channeling Cam Smith, some of those dummy half passes were ridiculously forward, and not one was pinged. The momentum of that first half could have been completely different if they were. Is it the touchies who should be calling them? It’s one of those things that really irritates me, as there’s no excuse for not picking it up.… Read more »

How often was ANZ quarter full? It has to rate as one of the all time worse RL grounds ever. It was OK with a big crowd but terrible with a small crowd.

With regard to Brown as I understand it we nothing to lose by challenging the charge but the Barristers fee.

Forty, again you articles are the (blue and) gold standard on TCT.

A great balance of opinion and stats that’s not FULLY blue and gold tinted, but there are enough shades of the Parra to matter (see where I went!!?! 😁)

Keep up the amazing work and bring on the Raiders next round!!

Forty they are saying 6 weeks for Turbo’s return from his hamstring injury. If that is true he won’t be available for the return clash with Manly.

The right side defence has been the weak link now for some time. Penrith exposed it once when Mansour scored and thankfully never tried too much for the rest of the game. It will take some time, but they’ll get it together (I hope). This was a high quality game and it came to down to who blinked first, which was unfortunately us. This was a very well constructed assessment of the game.

Still believe the Ferguson no try penalty was wrong. Should have been sent upstairs. All footage I have seen shows Tupou’s foot contacting the ground first