You know it’s getting close to the season when I cease to report on any of the conditioning component of the pre-season training session. Blue vs Gold football action was the dominant feature as the Eels kicked off the new week of work – no surprise at all with the first Canterbury Cup trial scheduled for this Thursday night.

So how good was the session?

For the Blues, it was outstanding.

For the Golds, it’s been better.

Over the last four weeks, the opposed sessions have been highly contested affairs. Today it was a one sided romp for the Blues. They flexed their muscle, and were a class above. 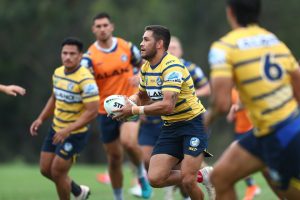 Many would be happy to read this, after all, an NRL top 13/17 should hold the upper hand over their lower grade colleagues. With the Eels expected to challenge for a top four spot in 2020, it would seem a non-negotiable.

But the counterpoint is just as important. The NRL players need to be tested in these sessions. It makes for better preparation. And it’s often achieved as the NRL middle forwards interchange between teams rather than spending time on the sideline.

Unfortunately there was little contest this afternoon.

Not in attack and certainly not in defence.

Putting it into context, it is perhaps too harsh to criticise the opposition facing the Blues today. The reality is that the Gold team have done their job admirably over the preceding weeks. They’ve pushed the Blue team to the limit, and have earned due praise.

Therefore, let’s consider this an aberration and instead focus on the many positives from this session.

* A sublime ball to Matterson around half way (from Nathan Brown I believe) puts the big fella into open spaces. As the cover converges, Matto finds Mahoney in support on the inside, and he sprints in for the opening try. 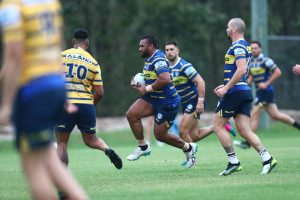 Junior charging into the ruck

* A barnstorming run by Lane carries defenders over the line for the second try.

* Reed threads the needle with a pass to Junior close to the line, and the rampaging front rower crashes over for try three.

* Taka makes a one on one tackle following a kick, then steals the ball in the process and crosses out wide for try four.

* With the Golds attacking the Blues line, Moses takes a superb intercept and sprints 95 metres untouched for try five.

* Gutho links with Sivo just before halfway, and big Maika sprints into open pastures, then puts a classic in and away on the Gold fullback and scores the sixth try in the corner. Restraint was needed to not chant Si-Vo after watching that!

* Dylan Brown brings down Marata (who was in the Gold jersey at this stage) in an amazing legs tackle close to the line.

* Two tackles later Marata deadset rampages through the Blues defence for the try. He runs onto the ball with such power that it literally appears as if nothing will be able to stop him.

Everything seemed to click into gear for the Blues today. Even allowing for a less than ideal Gold performance, it was a composed and professional display from the top 17.

The completions seemed high and the talk out on the field was impressive. After scoring, the players were reminding each other about their goals from the kick off.

If the players were fired up on Friday, then today it was a controlled aggressive display. 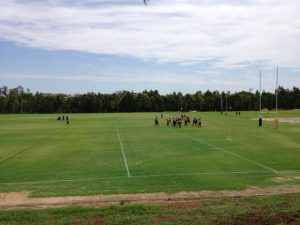 My view from the sideline hill today. (Phone image)

On reflection, there were many aspects of the Blue performance that we witnessed during 2019. The highlights from Lane, Brown x 2, Moses, Gutho and Sivo were exactly what readers would probably expect me to report during a preseason.

So if I needed to pinpoint a difference for this preseason thus far, I’d suggest that it might be an improved platform laid by the forwards. And Matterson and RCG will be important additions.

Obviously, the proof will only be seen on NRL match days. Such an observation is only reflective of training track form. Still, you have to train it as the foundation for bringing it.

The Trial – An Important Announcement

Regular TCT readers might have noted the times given for this week’s Canterbury Cup trial at Ringrose in previous reports. A late change to the time has since been brought about by the cancellation of the Ron Massey Cup trial.

The new kick off time is now Thursday, 6pm, so if you’re thinking of catching this match, please arrive early.

I’m expecting this to be a trial in every sense of the word, with a multitude of players used – established players, those trialing for contracts and a few Flegg players thrown in for good measure.

Players such as Hollis, Hughes and Schneider were involved in a combined Flegg/Canterbury Cup training session that I watched yesterday, so I expect them to be involved at some stage.

Sixties to top off Lane’s good performance on the training track yesterday, 2GB just announced that he has penned a three year extension.

If true great work by the club

Been waiting on this announcement. Terrific news.

Ah Craig you can smell it mate, great read

Outstanding mate – I think every person on this site owes you plenty for your efforts over a testing, hot and difficult summer. Your reports are always top class and you have set the season up so well. We know we needed to improve and we needed some mental toughness about our game. I think your reports have shown plenty of new attitude and dealing with some adversity. Fingers Crossed mate.

Cheers mate. Looking forward to it.

Tks sixties. Can’t help but think if Nathan Brown can get hit with the good luck stick this year and play heaps of games, it could be a bit like another new signing to go with other quality recruiting. In a perfect world that would give us more upside than maybe we think. Here’s hoping on this one! And great news on Lane.

Cheers BDon. I think Brown’s work at training has gone to another level since they returned in January. As you say, time for him to get some luck.

Great Read again Sixties and Happy Birthday for your day today. Heard a rumour about this today…..so well done on another year of life and football and more.
The session seemed like a highlights package of an NRL game. It is making me or us itch for the competition to begin but we also need to be somewhat patient for the team and hope they can build, stay injury free or close enough as the expectation seems to be building and this makes me somewhat cautious while also excited to some extent.

Thanks Milo. I never lose sight of the fact that this is the training track. I also made sure that I tempered the interpretation of this in describing the Gold performance as below expectations. The positive was seeing the players exhibit the mix of 2019 combinations as well as the encourage contributions of RCG and Matto.

Sounds like they’re ready to go. I like the sound of the forwards laying a platform and the sharp display by blue. How good is Dbrowns defence. Is Waka likely to be ready for round 1?

Dylan will always get targeted – he plays in the halves and teams like to fire shots at opposition halves. However, he loves the contact, so you know he won’t be a weak link.
I think Waqa goes close to being ready. If he can get about 3-4 weeks in opposed sessions before the season starts, including time out of an orange vest, then he plays.
Stay tuned to the reports.

If Waqa isn’t fit for round 1, based on what you’ve been seeing at training, who is the most likely replacement at right centre, Taka, Parry, Salmon or even George Jennings ?

Well, if we hadn’t heard and seen so many competitive contact sessions between the Blue and Gold teams we have have had cause for alarm at our depth? but knowing the facts and as you reminded us “usually the top forwards rotate between both teams” we can only be excited about our top 30 this year. As regards to our top 17 I think today’s contact report gives a sample of what we can expect of the steel that is now present in our top forwards and the potential for our Reggies forwards and backline depth will be a welcome… Read more »

Cheers Rowdy. The forward depth is excellent. That is our strength. We need some of the younger backs to develop this year. I’m hoping that we decide on a position for Salmon. Is he a half, is he a centre? I keep changing my mind. At this stage of his career, despite his utility value, I think he needs to develop a specialty position.

Thanks for the report mate .Hows my big boy maika goes today?

Maika is in good training track form. Getting fitter too.

Do we look down on numbers for canterbury cup since letting all those juniors leave ??

I think it’s fair to say that there’s a bit of a hole around the halves with both Taipari and Biondi-Odo moving on.

Thank you Sixties. I see Matto doing something special this year, he will step it up again and play Origin. When you hear him speak you get the sense of someone who has worked it all out in their own mind and matured into a leader.

Seen a few instances during the preseason that confirm this Jimmy.