I’m not sure whether that instruction was given this morning, but you could be forgiven for thinking that it was. It was no place for orange shirts out there in what a highly competitive, heavy hitting, opposed session.

Indeed, if last Friday had its disappointing moments, then this week was its antithesis.

The footy was played at a stunning pace, with the middle forwards in both teams carrying the ball with venom. It was no surprise that the errors in the session mostly occurred in some of the biggest collisions.

There were surprised expletives about the ferocity of the defence from those of us watching. There was delight on the field when a turnover was forced. There might even have been a player or two looking for payback as the game continued!!!

It’s what can happen when things get serious. And it makes for entertaining viewing.

In a morning of highlights, I’ve selected the following:

Dunster and Gutho compete for the ball

* A try to Haze Dunster who demonstrated tremendous awareness and pace in chasing a kick to the corner, winning the contest for the ball against Gutherson.

* Gutherson quickly redeeming himself with his own kick chase, pressuring two Gold players into an error and swooping on the loose ball for the try.

* The improved composure of the Blues. Last week I was critical of the pushed plays. This week, there were a number of occasions when the ball player took the tackle rather than delivering a pressure pass. Last week this caused far too many turnovers.

* A heads up play from Lane off a kick off to get his leg (it’s long enough!) over the sideline as he caught the ball to earn a penalty.

Without doubt the big moment of the day was the try to Michael Jennings. Attacking just outside the 20 metre line, the Blues shifted the ball to the left. The speed and accuracy of the passes gave Jennings space. His acceleration off the mark was stunning, as he got outside his man to cross in the corner.

It was everything we’ve come to expect of Browny. His charges into the line challenged the defence in every single carry. The reason is simple – it’s all about deception. Defenders are forced to commit to the tackle as the talented lock appears to be galloping directly into them, but he’s then able to pass or step late, or alternatively continue the line he’s running.

I have been surprised by the leg speed of Campbell-Gillard. He seems to bend the line with every foray through the ruck, and it’s the pace of his runs that gets him right to the advantage line, and then drives the defenders back. It was more of the same again today. 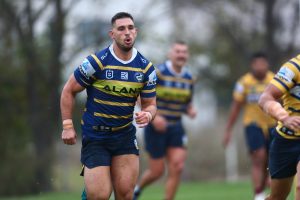 * Ryan Matterson will be a point of difference.

In this session he used his big frame to great effect on the edge of the ruck. As a former half, he has the ball skills to link and set up his outside man. However, when he takes on the defence, his pace and size make him very difficult to contain. He already seems to be forging an impressive combination with Moses.

Today the big unit left his mark in both attack and defence. It’s rare that a defender doesn’t reel out of a tackle on Stefano. His opponents might also be carrying a few bruises after his hits.

I rated the Blues kicking game as one of the best of this pre-season. The variety of kicks minimised any predictability and kept the Gold team under pressure. 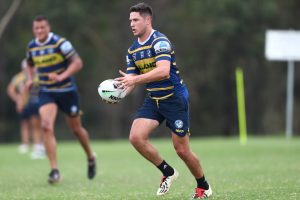 Though the Gold team are often strengthened through the interchanging of NRL forwards, the form they are exhibiting is a promising sign for the prospects of the Eels reserve grade team. We’ve witnessed some of the second tier contracted players in action in throughout January, but we’ll learn more about them and others in the upcoming trials.

In the meantime, their performances are raising the quality of the opposed sessions.

Only six more sleeps till the trial at Ringrose.

Nice! well for the reader it is, but I would imagine by reading through the lines and behind them, a few players would thinking There’s nothing nice about this, and the opposition is supposed to be on our side.

The best part of this report though is the second last line.

I’m ready to watch a trial. Let’s watch the players against different opposition. It’s only Canterbury Cup, but it’s good to get some footy.

Ditto mate,busting my behind to be there. Great report as usual

Hope to see you there Joe.

Hello Sixties, apologies if you have advise the trial time, but can you confirm what the time will be please?

Good stuff , not long now and we will see whether they can deliver on the potential of what we all believe this team to be capable of. When your two biggest recruits are continually mentioned positively in regards to effort in the pre season it makes one very optimistic that they may provide the vital ingredients to get us to that next level. That goes as well for our new young bull In Stephano, however bittersweet it may be to see him become the newest teen sensation , for the benefit of our 2020 campaign , I hope he… Read more »

Same mate. Big fan of Stefano. Both of our new buys will be enormous for us.

It’s a bitter pill. All the time and development only to be signed by another club. Perhaps we where a little to casual here. Unsure how the signing process goes but a shame to see one of the highest rated juniors we have go to another club.

We have been critical of the processes in our pathways post. We can only hope that things improve this year.

Agreed Eggman and if he does do well we hope he may have a change of heart and stay in the blue and gold. Who knows but we hope he tears into the opposition and makes his debut with us. (against Wests).

If that were his debut, it would be a beautiful thing.

Speaking of beautiful things, went to Kens at The Entrance

Was hoping to spend a few days up that way this month, but looking unlikely now. 😟

ok, will give you a call or send some down….

Gr8 piece. Tell me Sixties, wld dunster be at this juncture in contention for a 17 spot , if a couple of injuries happened.

I think that Taka sits outside our first choice backline, but gets either a bench spot or next back spot. George J or Ethan then next, before Dunster or Smith, depending on the position.

I’m putting him in as a half rather than an outside back. I might be wrong about how the club views him.

Hopefully Dylan can add a kicking game to his locker this year, every 5th play came off Mitch last year as was getting very predictable.

What I saw from Brown’s short kicking game inside the opposition 20 was very impressive last year. His pinpoint grubber for Sivo’s (I think) first try in RD25 against Manly was beautiful. Very much looking forward to seeing more of this in the season ahead.

Exactly Brindmarsh. All of the backs work on their kicking game with the spine doing even more, both in specialised sessions and during extras.

I’ve been rewatching last years games while saving them to DVD. Dylan’s kicking game at the end of sets is sublime. That’s why you didn’t notice maybe? Even in Rd 2 against the dogs he was getting repeat sets to keep the pressure on. The early grubber against the knights for Sivo to score in front of his Dad, watch it again, fools the defence into coming up, perfect kick at the defensive line, perfect touch off the boot, perfect bounce, try.

Thanks mate. Great example and enjoyed revisiting a tough game.

Was a good game after they pulled our pants down earlier in the year, couple of good hits from Ponga on Guth and almost a good one on Klemmer from Mau.

Thanks for the continued updates. I’m pumped for this season. Our best squad in years in my opinion.

You’re welcome Troy. I’m of the same opinion as you, but of course the players have to deliver.

Great to see N Brown doing well. We missed him at times in 2019, and i hope he has a huge season with his leadership and aggression (controlled).
It seems to me we are covered quite well for forwards, and i truly hope the spine does its job as we could do almost anything with another improved defensive year.

I thought it was his best session of the preseason. He seemed to have match level intensity.

Sixties – can you confirm time of trial on Thursday at Ringrose – it might be earlier.