There are a few things that I have come to both love and know as absolutes when watching our wonderful game from the stands.

The first is that I expect referees to make up for mistakes they make, or think they make, in the game. How many of us knew when watching the call on Fergo’s foot that the Tigers would get a call later in the game?

In my opinion, the no call on Moses Mbye’s pass looked for all the world like a make up, a decision made by the same referee and touch judge who made the call on Fergo’s foot. Pure and simple – it seemed to have all the hallmarks of a get square and it is what’s wrong with our game and how it is officiated.

They seem to even up penalties, dictate speed and predetermine players to watch. This creates the inconsistency.

I feel for them because they are obviously instructed on how to do their job – but they bare the brunt of criticism.

In truth the criticism should go above them, to the men in the suits who are led by a man who said at the start of this year that fans can’t expect consistency. No wonder as a fan, who pays good money and spends way too much time going to and from footy games, that I have zero faith in the NRL administrators.

But enough of the negatives.

Why did I and thousands of Parra fans turn up at our away game on Sunday?

Why did we loudly cheer and support our boys? 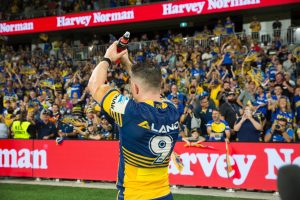 Simply, we love our club and love the game. We also wanted to remind the Tigers that there is no jungle in Parramatta and never will be. (Although I did laugh at how many Tigers supporters I saw  having lunch in the bistro at the club before the game.)

This passion is not unique to our team and it is my second absolute.

Passion for your team overrides everything. It has Tigers officials convinced that BankWest will become a home ground for them. It has Tigers fans convinced that Brooks is better then Moses. I know it is hard to imagine how anyone who knows league could think this, but they do. It has those same fans boo and complain about Moses, then laugh at us for re-signing him even when he rips them apart every time he plays them.

Passion is what makes us Parra fans despise those Silvertails who buy and have everything, despite the fact we are the ones with a massive junior base, a leagues club, a new stadium and double the members.

It is what will make me scream at the TV on Sunday because we just have to beat Manly.

It is what made last year so hard.

The passion our boys have shown in the last few weeks has been very pleasing. On Sunday they made mistakes, missed tackles and pushed passes. Some played better then others. But they all kept going, they scrambled and gave their all.

As long as they do that my family and I will make the drive and pay the money, even when we know that we will probably be at the mercy of the officials and the latest NRL crackdown.

The Eels are in the eight and next home game I know that I will be surrounded by thousands of Parra fans who love my club as much as I do. We will all do our bit to help the team make the finals.

It is just what we do, especially at our home, the wonderful BankWest Stadium – our Parra Stadium.

You’re absolutely right, Shelley. We drove down from the Central Coast to see them, my wife and two small boys and I. It felt like a home game for Parramatta despite the announcer trying desperately hard to make it a Tigers crowd. The Tigers fans around us felt like we do most of the time, hopeful but realistic that they were watching their team lose today. And, thankfully, that’s exactly what happened. It was wonderful to be surrounded by other young families and their small children and to see little girls and boys cheering the Parra chant. My own boys… Read more »

If I was working in the Tigers management I would be very worried about the future at BankWest. A Sunday arvo game, playing for a finals spot, a club legend playing 300th game and they did not sell it out and the crowd was probably 50-50 between the fans. The noise from the Tigers fans was flat before and during the game. It was like us at ANZ, if the supporters don’t feel it is home there is little that can be done to fix that. It is just good to be home and have a team we can cheer… Read more »

Yes Shelley, I think a good indicator this year has been our scramble, players staying alert and alive. On most of the park, excluding our own red zone, we’re starting to look far more reliable, including the scramble when a clean break is made. I’ve noticed we’re covering in behind the ruck better, there has been some finger tip tackles there but we are making them(as distinct from the Knights nightmare). Roster management,including youth, will offer more needed improvement(our defence stats say so).

I think we saw how important Jennings is to our team. When confident he is a wonderful defender and helps those around him. Those three tries are not scored with him playing centre as our poor decisions and Hoffman and Sivo getting caught in no mans land made it easy for the Tigers. Big decisions must be made re squad management. It also means we as supporters will have to trust management, as fans don’t really know about true contract money and also the potential of juniors coming through and when they will be ready. We have killed too many… Read more »

rip it up Shelly. Your on fire! and right it’s a jungle out there just not at Parra’s stadium!!

Superb read Shelley.
Beat Manly and we are closer to a top 4 finish albeit take it one week at a time.
V big match; and if we fall the next week game is not easier with Warriors at home. They never give us an easy one.