It’s the last week of pre-Christmas, pre-season training. A two week Christmas and New Year break looms for the players and staff, and given the intensity of the last seven weeks, it’s well-deserved.

The last training report was posted last Monday, so the purpose of this is to provide a quick summary of what’s transpired since then. The team has certainly been busy, even if I haven’t had the opportunity to write it up.

During all of his years as a coach, I’ve never seen Brad Arthur waste an open session. With the players required to do a meet and greet with the fans, the temptation may be there to stage a lighter run as part of the event. I can assure supporters in attendance that they were witnessing a true reflection of Eels training. 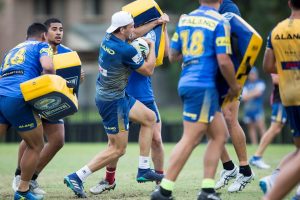 The three hundred or so members at Old Saleyards watched an intense opposed session against the Jersey Flegg team. This has been a feature of the pre-season schedule in past seasons, but it’s the first time that it’s fallen on an open day.

Before the opposed work began, Adrian Jimenez pushed the squad into fatigue. He was just as tough as usual, though the language on the field may have been more PG rated for the event.

The Flegg team were then given all of the possession for around 20 minutes as the coaches drilled relentless try line defence. Eventually the NRL boys were given the chance to hone their attack as they were given their own period with the ball.

As far as the Flegg team was concerned, big Sam Hughes and Dave Hollis grabbed the attention. These boys are still eligible for SG Ball, but are physically imposing at the Under 20 level. It will be interesting to track their progress this year.

With a heavy workload pushed to late in the day on Wednesday, it was no surprise to see a lighter day on Friday. To clarify – it was only lighter in terms of contact. The clash with the Flegg team featured some heavy collisions, so I wasn’t surprised that the tackles were taken out of this session.

Today’s emphasis seemed to be on skills.

The games of Beach Footy and Raid Footy were highly competitive, and it seemed like bragging rights were being battled out. I expect nothing less when Gutho is involved. Murph and Lachie Wilmot each joined a team during Raid Footy, and there were a few questions asked of Kidwell’s officiating. 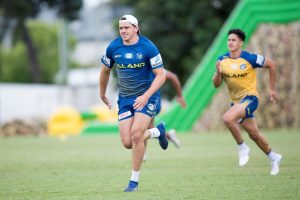 I thought that Gutherson, Brown and Parry were outstanding during the morning

Many of the staff then backed up for the Junior Rep trials on Saturday. It’s been a six day week for a few people of late, with the recent whole club training events adding an extra day to the schedule.

The warm-up and running mechanics with Lachlan Wilmot had the players building up from running with good rhythm to hitting and maintaining maximum velocity.

The squad was then split into forwards and backs as they alternated between conditioning with Adrian Jimenez and skills work with the coaches.

The forwards were first with Adrian and the running was relentless – about thirty minutes worth of shuttle runs. The backs had their “turn” after finishing their skills.

The backs began their skills session with kicking technique. It’s obvious that they want every back to be able to kick in general play should the need arise.

The outside backs then spent an extended period fielding general play kicks, with emphasis on communication and combination between the fullback and winger as the ball was gathered. Some astute kicking from the halves made the drill quite challenging. 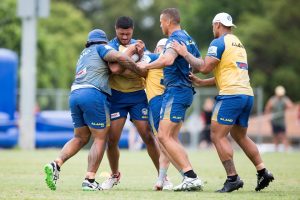 Stefano is a handful to wrap up.

The forwards began their work by practising their options close to the line. The variety of options made this interesting to watch.

Play was moved upfield as the forwards drilled mid-field shapes. There seemed to be a defensive component as the coaches were as pleased with defensive decisions as they were with the attack.

It was fascinating to hear BA emphasise the purpose of the different shapes – particularly the decisions that they will force upon the defence and how this can be taken advantage of.

The session concluded with the entire team coming together for unopposed work through of sets.

On reviewing the notes on Monday, it didn’t read as a tough session. However, the humidity levels were stifling and it was uncomfortable just watching from the shade. The players looked like they really felt this one.

I reckon that the coaches would have had a mixed opinion on the work. The effort was there but some of the execution was a bit off – mainly dropped ball. We probably don’t want perfection at training, as it might make you question the levels that are being set. Imperfection gives targets to work on.

I think Monday provided some goals for both individuals and the team.

Having moved house just under 2 weeks ago, and still in a world of boxes, no internet for the same length of time, and still no land line fone, getting the net back on Monday 17th, I was greeted by near 600 emails, including junk, and best of all several TCT training and Junior rep game matches. Reading each of the reports had me totally exhausted and glad I’m too old to even run on to a training paddock with those trainers the eels have. The first sign of things moving at the eels outside of these reports has the… Read more »

Many thanks Col. I approached the pre-season with caution. I’m now cautiously optimistic. I believe that the Eels will play a different brand of footy in 2019. Will last year prove to be a horrid anomaly? I hope so.

With you on the optimism. I am no coach but I would like to see the players train in some closed area, picking two teams and play against each other over an 80 minute period, with same breaks as an NRL game. Give the teams an open cheque book as it were, meaning no money in the bank to cover any cheques, but they are playing for positions in the main team, allow them also with the open cheque book to play the game by their instincts and abilities. Making sure that the two teams have good choices as captains… Read more »

Good reply Col!! – Sixties & co. I wish you nothing but the best for you and yours over the holiday period & thank you so much for these training reports. Much appreciated mate!!

Thanks Steeleel. We will still keep the content coming over Christmas, so stay with us.

Is Corey Norman still training with the team?

Great read mate as always . With Norman now gone and all the talk towards Dylan brown . Love to know your honest opinion on this kid. I have never seen him play so I am basing myself on thoughts of others.

Merry Xmas mate and may 2019 be a fantastic and safe year .

About 6ft tall, sits somewhere between 85-90kg. Extremely strong and defence is one of his strengths. Is capable of playing as dominant half or alternately playing off a dominant half. Enjoyed a good halves partnership with fellow Kiwi Joe Taipari in Ball and Flegg and it seemed they could alter who was dominant match to match. (Joe should return from injury next year) He is blessed with a good temperament – very composed. I won’t burden him with too many expectations for next year as he is only 18 and yet to play NRL. When his time comes, I hope… Read more »

All reports on him sounds very good with Brown, lets not get too far in front otherwise some could kill the kid with expectations and ruin him for the future.