Since the inception of our Parramatta Stories, we’ve learned much about the Parramatta Junior Rugby League. In talking to the junior clubs themselves, we’ve uncovered just how vital they are to the communities they represent.

Those stories, which will continue in 2023, have also explored the history of each of the featured Junior Rugby League clubs. Some clubs are one hundred years strong, formed well before the founding of the Parramatta Junior Rugby League. Others have been more recent additions, especially those located around the housing boom in Sydney’s north-west

Along with the Parramatta Junior Rugby League, we are extending that exploration by researching and documenting the history of the Parramatta District competition itself.

Currently, 28 junior clubs participate in either the Saturday or Sunday competitions, with generous financial support from Parramatta Leagues Club minimising the cost of player registrations.

However, researching the distant past is no walk in the park. With little detailed documentation available online, it relies on collectors or those with a personal or family connection.

We know that the Parramatta District Junior Rugby League came into being in 1946, but who were the clubs? We can be confident that the likes of Wenty, Guildford, Toongabbie, Cabramatta, and Merrylands were involved in that initial season, but outside of those we would be making an educated guess.

Fortunately, a 1947 junior finals program provided us with some insights. 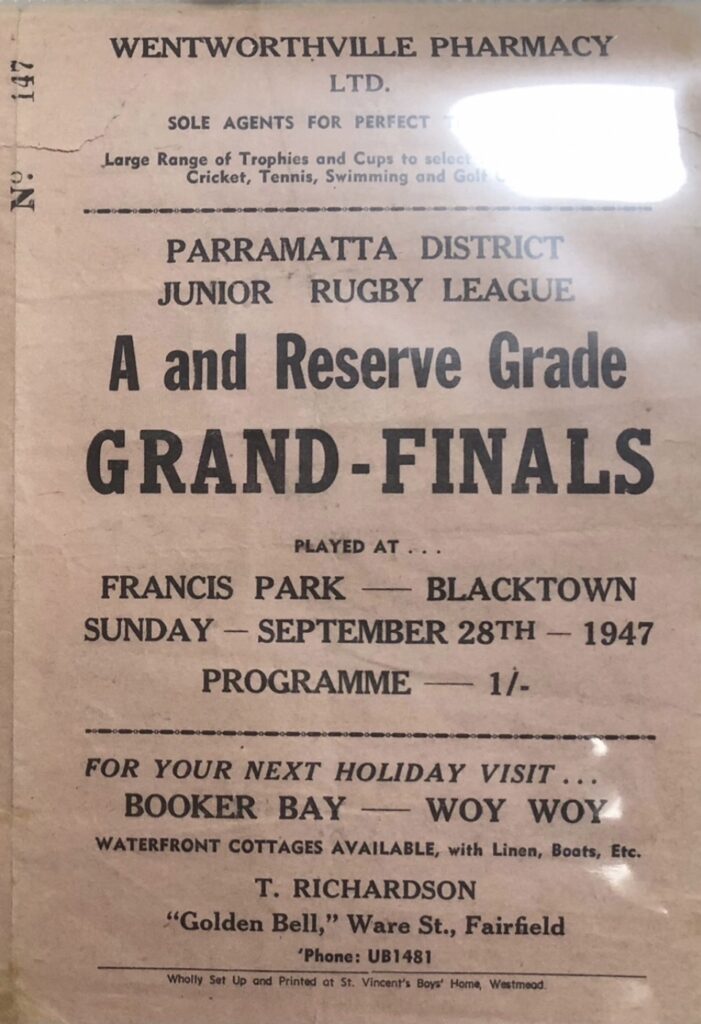 It documents that the number of registered junior players in the Parramatta District had grown from 1300 across 50 teams in 1946 to 1600 players across 65 teams in 1947.

Part of the growth in 1947 had resulted from the addition of B grade to the A, Reserve, C and D grade competitions. The B grade catered for under 21, with C and D grade fielding under 18s and under 16s.

Back then, the Parramatta catchment area was vast, even in comparison to its current boundaries. This was because it covered locations now within the Penrith and Western Suburbs junior league.

It was an astonishing geographical spread. From east to west it stretched from Rosehill to the foot of the mountains, and traversing north/south, it was a journey from Windsor to Ingleburn.

Not all clubs fielded teams in every grade. An obvious example, and an interesting participating club, was the RAAF who only fielded an A grade (open age) team. 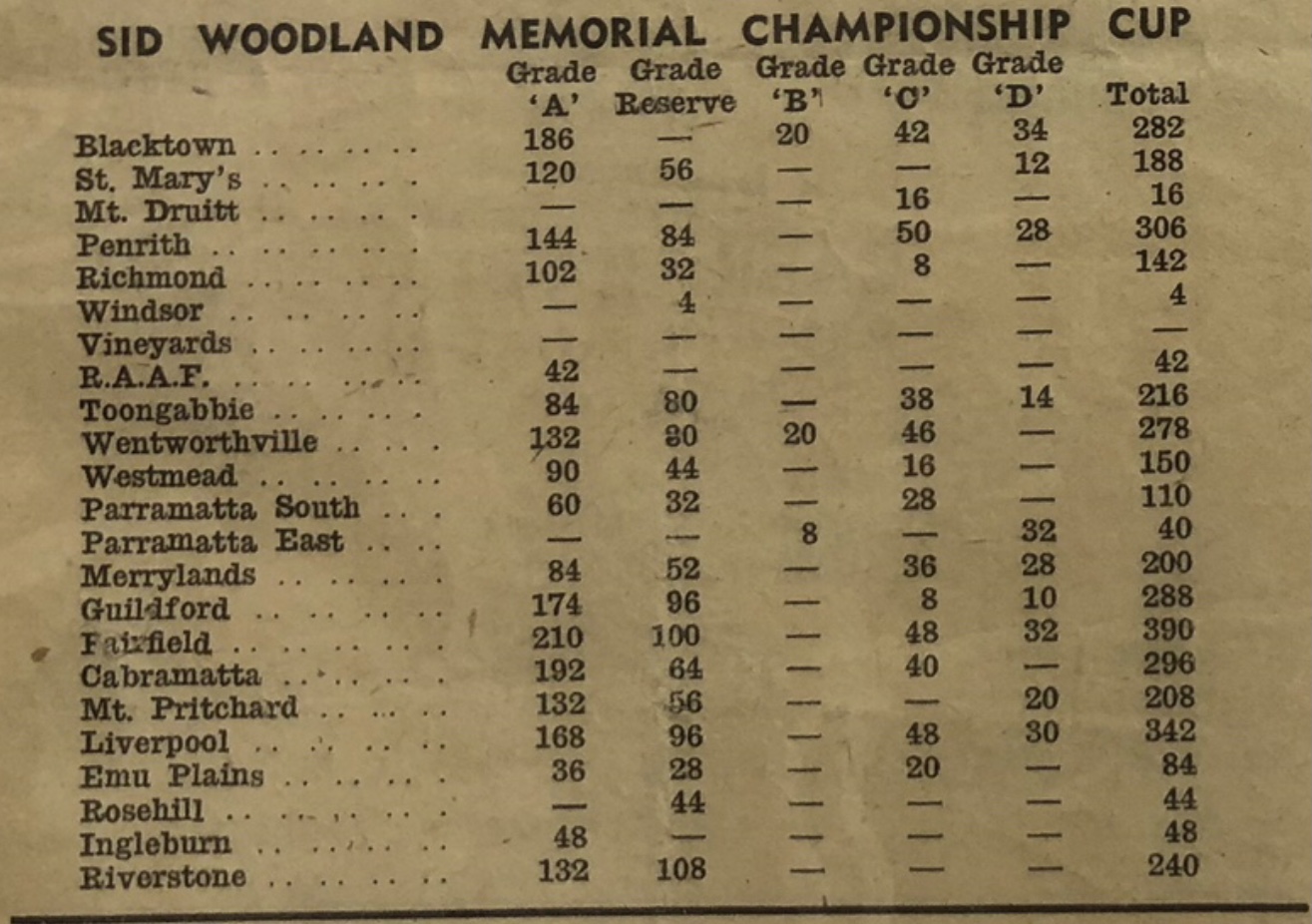 The Club Championship points listed in the 1947 program

Unfortunately, that program didn’t confirm which of those clubs were involved in the first year of competition in 1946.

This is where you can help us to put the pieces together.

We are seeking information the PDJRL competitions, especially the early years, or on any club that has participated in PDJRL. Details on clubs that no longer exist will be the treasure most coveted. We hope to uncover when they joined and when they ceased competing. 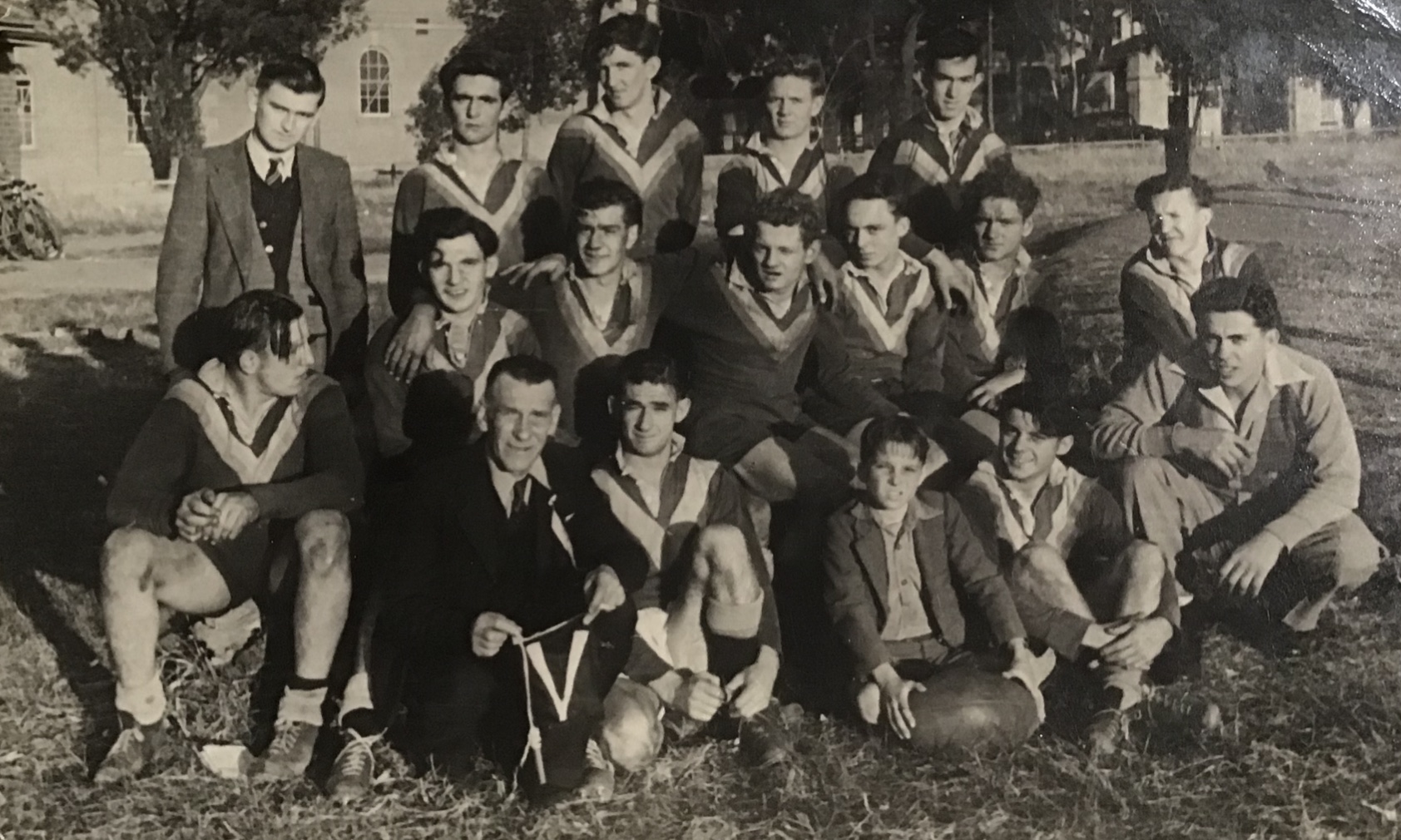 All clubs, no matter the duration of their existence, how long ago they participated, or how many titles they won, are all a part of the history of the district and it needs to be recorded.

Trying to document 77 years of the Juniors will be challenging. Many people involved back in the early years will no longer be with us. Memories of others will be dim. Back in the 1940s and 1950s my own father played for multiple clubs, including three that are defunct – Parramatta East, Parramatta South and Harris Park. Unfortunately, he can provide no details on when each club either folded or changed their name. 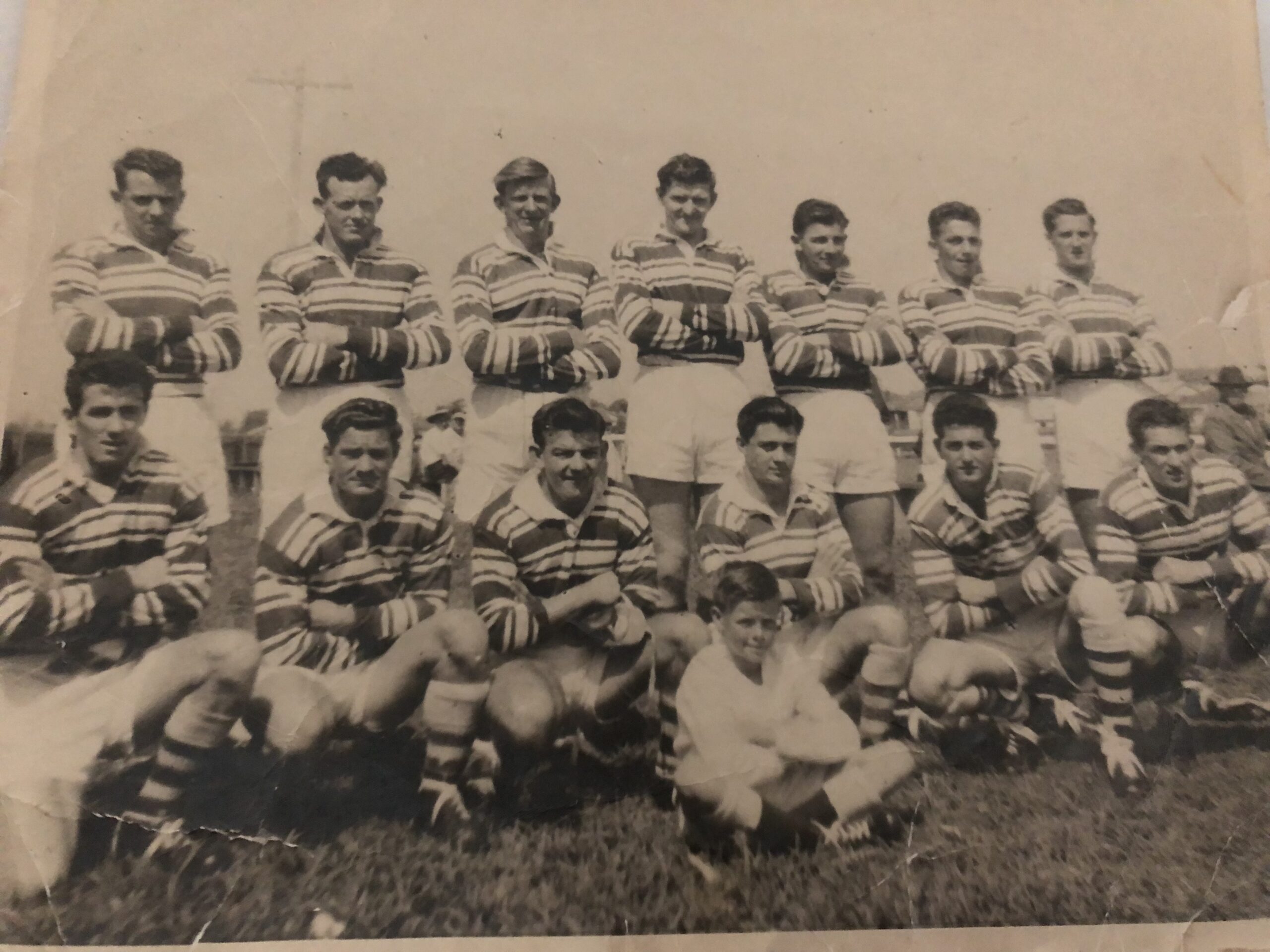 If you can assist in this historical endeavour we would be grateful for any information, be it anecdotal or on official documents. There is obviously a pressing need to gather data on the 1946 season, and those early years. However, any material from the past will likely prove enlightening.

Perhaps you have some ephemera such as a junior league program from the 40s, 50s, 60s, 70s or the 80s. Maybe you have an annual report from a club or the PDJRL itself. These can be a goldmine of information and we’d appreciate screenshots of any you might possess.

Whatever knowledge you can pass on would be much appreciated.  We look forward to unearthing some of the rich history of the Parramatta Junior Rugby League.

Sixties, IIRC the first year for the eels team to play was in 1947 and not 1946. From my understanding the eels were still awaiting the signing off of the agreement in 46, with games to be played from 67 in the RL comp

My mistake & I was not born then 47 was when I came out. Good post and article as well, looking forward to next season.

My brother was ball boy at Granville Diggers (Granville RSL team) in at least 1957 and later played for them. Im sure they would have been part of the Parramatta District. Would be worth contacting the RSL to see if you can access their archives.

Cheers Tanky. It was Guildford and referenced in our feature on the Owls.

Thanks for the tip.

Wow, this is amazing Sixties and I am proud to say that Ingleburn was my old club (RSL first and then I played for the Ingleburn Bulldogs). I won’t bore you with all the details but I can send you privately my fathers team photo when he played back in late 1960’s if you wish. He often talked about the travel to play in the Penrith / Parramatta areas when he played, and people forget how long the trip would have been back then.I will send you the photo that I got framed for him, and some great memories here… Read more »

Thanks mate. Appreciate that and look forward to seeing the photo. If you can confirm a 1946 entry and the actual year of being moved out of Parra, that would be brilliant. If not you’ve still given us a lead to chase.

My apologies to people who see thumbs down on their replies. Every so often a particular person thinks it’s clever to vote down comments, mostly mine. We ignore him but given the context of this post I thought I’d explain.

Interesting, i assumed that but hey everyone has their opinions.

He used to pick on my good friend Colin Hussey

John I would suggest that his diet of Farax shows his age mentality.

I guess that clown seems to get a great amount of satisfaction by being the last clown in a circus tent, generally only insults himself with his low grades of intelligence.

Sixties my wife’s two eldest brothers played for Parramatta City. Both in the same team, both Hookers.

I will ask around the family for more. It would have been early 60’s.

Parramatta Marist was a rugby league powerhouse in the 60’s, 70’s and I suspect the 80’s. It produced many first and lower grade players. As an old boy who played in a very successful side it sickens me to think that they don’t field a team in any competition. The very strong MCS competition that was played amongst all the catholic schools on Thursdays has also collapsed.

The Eels use the facilities of Marist at Westmead. As you say, a shame.

Parramatta has long had a separate convents schools Sunday competition. It commenced in the early 60’s catering for under 6s to under 10s and more recently 11s. It’s clubs are now integrated with the junior league. Over the decades it gave children with other Saturday sports commitments an intro to rugby league.

Cheers Phil. There is still a Sunday comp catering for primary age children and we featured one of those clubs – the Baulkham Hills Brumbies – in our series.
Thanks for this

Yes Sixties the Convents comp was restructured a few years ago under the auspices of our junior league and now referred to as the Sunday comp.

Liverpool JRL won the first club championship in 1946. My dad, Herbie Smith was the club secretary then and for decades later. The club played on Bigge Park that year. Liverpool’s Wally Woodward was Parramatta’s first halfback followed by many Liverpool natives including myself. In 1952 our fullback was Ray Rogers, father and grandfather of Kangaroo greats. Don Regan was captain coach in the 1950s when Liverpool was dominant. Our rival then was Guildford. In 1954 our E grade team won then grand final 54-0 (20 minutes each way) In the 1950s Merv Cartright hosted an annual knockout comp at… Read more »

Rip off
Reply to  Alan Smith

Think don regan went on to coach 3rd grade at parra with both his boys in team , handy players to !!

Happy hunting sixties! Unbelievable that Fairfield City is no longer operating.I note on that old program they were leading the club championship. I Googled a couple of things, an article from around 1977 on the Fairfield City Falcons which mentioned Len Stacker’s player/coach years. In early 70’s they had merged with arch rivals Villawood to become FCF, Stacker had more a Cabramatta area background but the new club were happy to have a good quality outsider to chase honours.A Fairfield v Villawood A Grade game on a Sunday afternoon was RL gold. Also Googled the Fairfield Heritage Museum ‘Fairfield Rugby… Read more »

My dad was captain coach of the Guildford A grade reserves in 1966. Unfortunately he has passed away so don’t have any information other than photo attached. 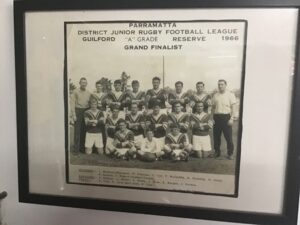 Thanks Anon. Appreciate you sharing.