Up to now, my preseason training reports have taken the form of a weekly summary. With a collection of NRL players yet to return, and minimal opposed contact work, it was the best format to adopt.

However, this final field session of the year was a major point of difference. The focus was on the footy and there were enough noteworthy moments to provide a post dedicated to a single session.

After being given a heads up about the nature of this session, I fronted early in case the kick off was moved forward. This turned out to be worthwhile because I caught some of the skills work that takes place before the major field session commences.

The squad was split into groups that rotated around activity stations. Much of it related to passing skills such as offloads, long and short passes and dummy half service. There was also some contact work involved.

When the whistle blew to signal the completion to this “entree”, the squad left the field, returning around 40 minutes later for the main course. 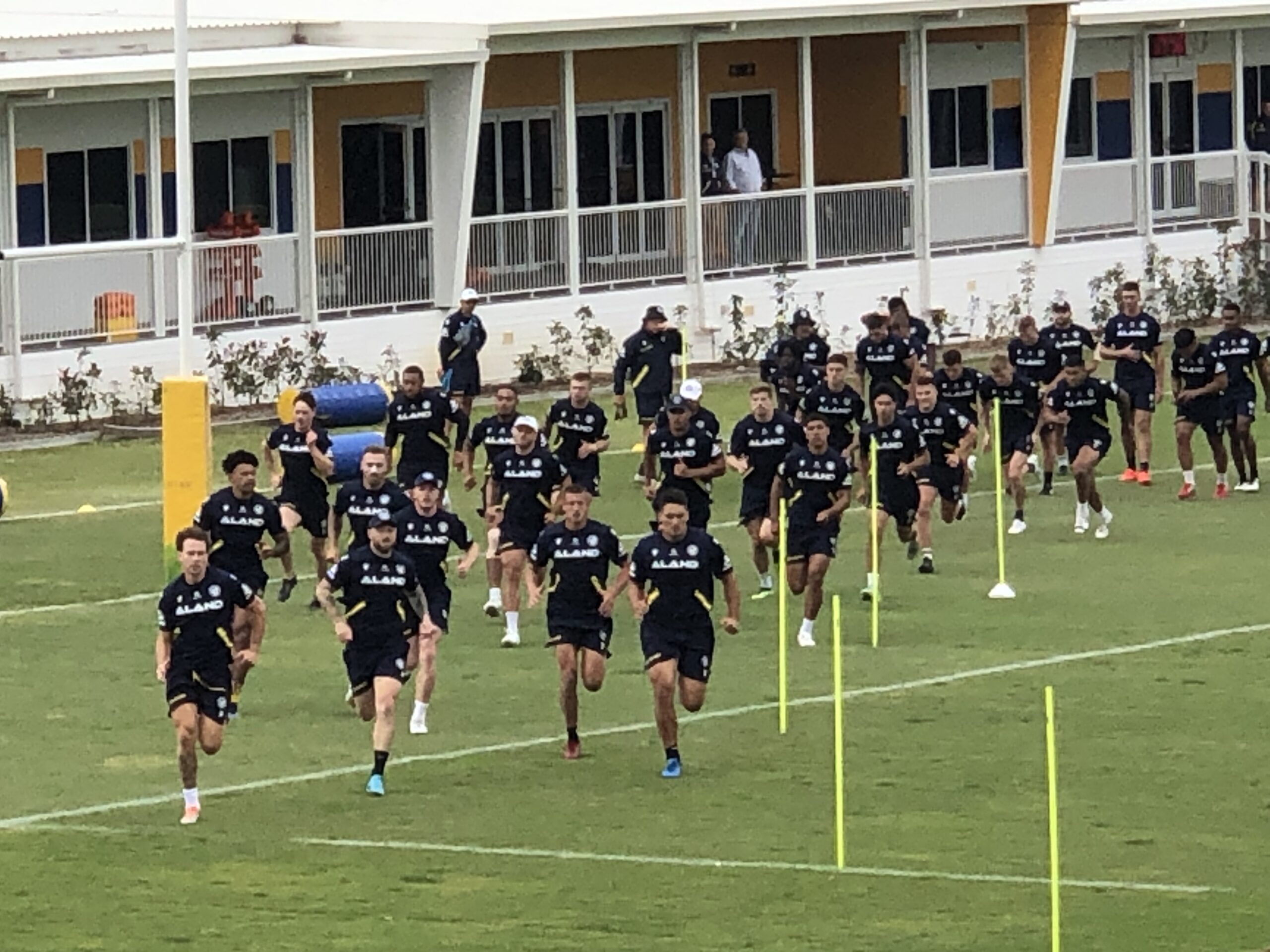 The session commenced with warm ups and conditioning runs, but it wasn’t long before the squad was split into three teams, donning Blue, Red or Green bibs to denote their team.

As the morning unfolded some players were asked to fill a spot in multiple teams as there wasn’t quite enough in attendance to fill the third side.

The contrived opposed work was organised as follows:

Attacking sets were then played out with contact. Scenarios such as penalties, scrums or drop outs were used as the starting points for each set. It appeared to be mostly structured play, giving the coaches the opportunity to assess the shapes that had been drilled (mostly unopposed) during every previous session.

Later in the morning, the sets from a kick off were played against an active defence.

* Hodgson putting Lane through the line

* Ethan Sanders creating opportunities on the left side for his team

* Ogden crossing off Hodgson and generally proving a handful for defenders

* Jake working the left side, linking with Lane and delivering a delightful pass for the try

* Effortless accurate passing from Hodgson, linking quickly with his supports

* Murchie playing in the middle

* The wingers holding nothing back in going for the corners 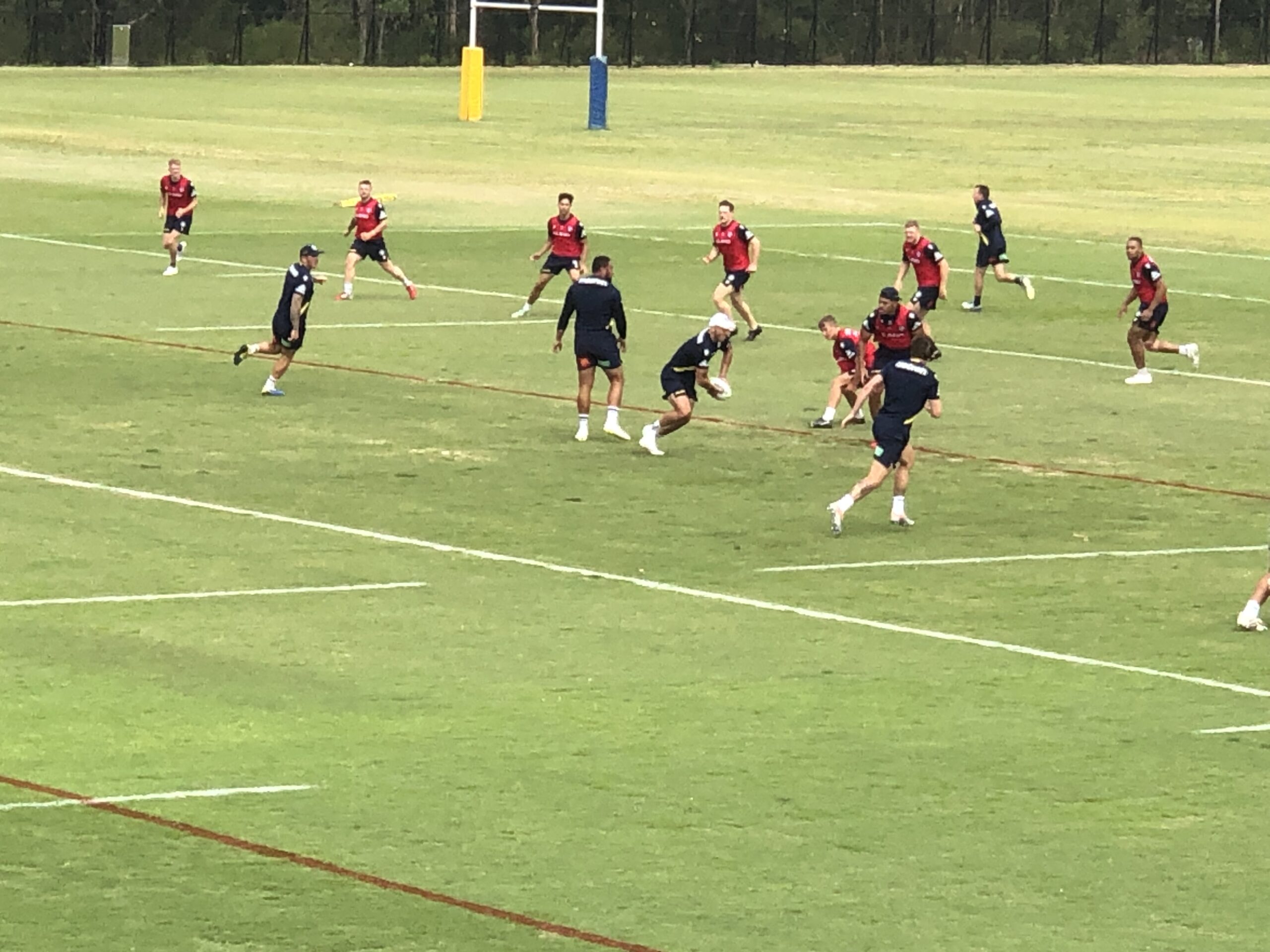 This wrapped up the pre-Christmas involvement of the pathways players, and without singling any out I can still say that they acquitted themselves quite well.

Whilst still being some years away from potential NRL debuts (and the reality is that some might not reach that level, or do so at Parra), there are a number who looked like they belonged (at least from a training track perspective) at this level.

Today represented the most prolonged and fluent practise of Parra’s structured attack against a physical defence. In previous sessions it was mostly drilled without opposition or in sequences of limited tackles.

Obviously I’m not going to break down how it differs from 2022. The structured play will be in evidence either during the trials or when the season commences. Based on what I’ve seen, we should look forward to what the team will produce in 2023.

As far as the NRL squad is concerned, Mataele was one of my standouts in this session. Last season he played on the left edge with Jake in the NSW Cup, but here he was running great lines on the right. Given his history with Jake, from Rouse Hill Rhinos and St Pats Blacktown through to senior footy, you would expect them to combine well.

At just 20 years of age, Jake Arthur was the senior half on the field  today, and he performed accordingly. I’ve always had a high opinion of JA and Baz is already adding new dimensions to his game.

Finally, Josh Hodgson. I need time out to expand my list of superlatives so I’ll simply say he is a magician around the ruck.

Stand by for a pre-Christmas wrap up of the Eels preseason within the next few days. Maybe my deep dive into the thesaurus will be complete by then.

Great to see the young players being eased into the process. Good way to allow their bodies to adapt with less chance of injury.

They’ve had a terrific insight into the standards and commitment involved in being an NRL player, with, as you say, due consideration for the welfare of players of a young age.

Awesome write up mate. It seems it’s between Mataele and doorey for back row spot come round 1 with murchie in the middle

Momoisea is my tip for a bench role.

Mataele is on a Dev contract so he’d have to wait till after round 10.

Amy word on Russell? How does he look size wise? He is at that age now where he needs to be pushing for a regular NRL spot.

Who has impressed you more Doorey or Mataele?

Doorey will be my starter for Ice. Mataele isn’t eligible till after round 10. But in my opinion he will debut this year.

Interesting. I thought Matto will move there and Hopgood will start.

That’s my early call. The opposed sessions in January will be the next pointer to such decisions.

Mr Sixties, as a loyal Parra fan since the late fifties one develops player favorites that it is hoped that they stay until they retire. It’s a realization that the business of rugby league makes this at times an impossible dream. Losing Maranta, Mahoney, Stone and even Oregon who are players brought into the system from a young age. The reality is the NRL is a production line and as players go new ones come through. The truth of the matter is if we cannot win the big prize with what we have then change is inevitable. This year was… Read more »

Merry Christmas Zero. Your thoughts about player turnover are so true. After the grand final, a wise bloke said to me that “the changes would be a good thing as those here couldn’t quite get it done. No reflection on them, but some injection of new blood would be the path to taking the next step.”
I believe that the squad will perform at least as strongly in 2023.

Mate, what a classic contradiction.

Great read Sixties.
This is really getting back to the “one club” mentality. The pride in the Blue and Gold is being taught and shown. It’s going to pay dividends for years to come.
Really excited by the signings; Hodgo, Hopgood, Jirah, Merch and Doorey. It’s going to just add that extra level of competition with Rodwell, Greig and Ogden and even Matto.
Looking forward to your next instalment!
Thanks again.

Thanks Pete. I’m looking forward to watching what I think will be points of difference in both attack and defence continuing to become part of our play.

I think the backs get a touch stronger, atleast depth wise. We’ve lost Opacic and even thou no real gains Dunster,Laizou,Cini and Russel will all be NRL ready you’d imagine when needed. Asi adds depth in halves and can play centre. If Hodgson stays fit we don’t lose much at 9.We may even gain some. Papali’i is a huge loss in attack but Doorey,Hopgood,Murchie all defend better. I don’t feel Kafusi is a loss and Marata had an average season while Stone barely played. Then there is the unknown of Mataele and Jirah who may suprise. Plus I imagine we… Read more »

Just from watching Reggies on FB I think Ogden seems most likely to step up. He runs hard and I even saw a little skill here and there. All those saying our window closed due to the losses havent looked close enough at whats coming.

Hindy, there is massive competition for spots. There are blokes who will miss out on a NSW Cup spot because of that and they can consider themselves very unlucky.

You are spot on Hindy. When you compare the players we lost to the players we gained, I think we are far better off.
When you go through the team we have now, we have depth on the wings, we have depth in the centres, we are stronger in the halfs, and our forward pack, as it stands now, is far stronger, and will become even stronger if we sign Marty Tapau. Then you add in the influence Barrett will have, it’s obvious we are stronger.

Hopefully we go in 1 better this year

The squad should be stinging and determined to do so.

I have been told Moses is a done deal. He ain’t going anywhere.

Gee i hope u r right Hindy, it’s taking too long for my liking,I’m hoping Parra and Moses are just waiting for the salary cap increase to be official 👌

People forget Moses missed the birth of his first child for his team. I just think it’s media speculation to suggest he’d go anywhere else. Just a matter of details being worked out.
Moses is staying!!