17 teams, 27 rounds, 3 byes. The 2023 draw is here and it is…interesting. The Parramatta Eels once again find themselves burdened with one of the harder schedules in the NRL but like the late great Randy Savage famously said – “I’m the tower of power, too sweet to be sour.”. Wait no, that wasn’t the one. “But the cream will rise to the top, ooh yeah“, there we go!

A tough draw didn’t hold the Blue & Gold back in 2022 and if anything, it can be used to galvanise and sharpen a hungry squad. Still, there are plenty of quirks, both good or bad, to their upcoming campaign so let’s take a dive into the details. 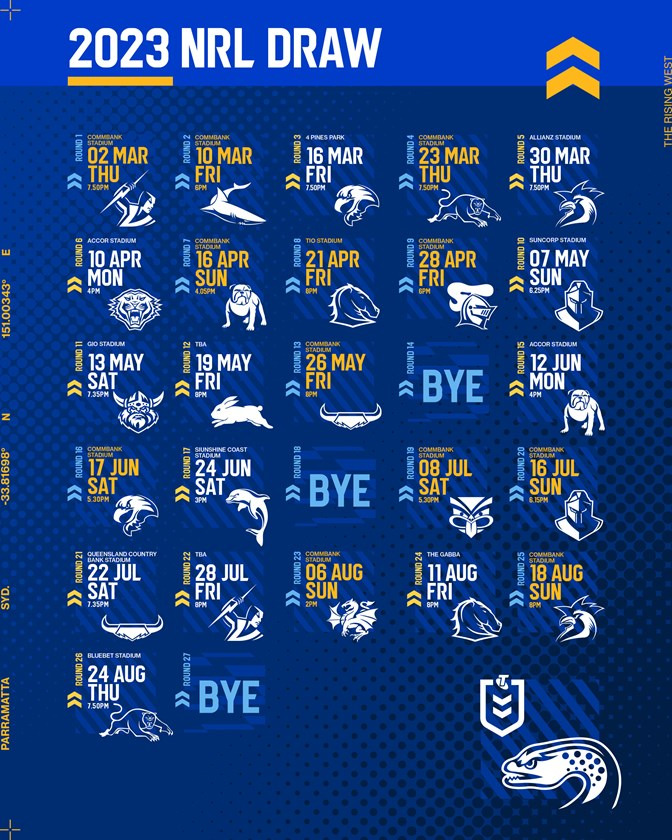 First up and crucially is who they play twice. Familiar foes and old rivals feature here in the likes of the Penrith Panthers, Brisbane Broncos, Melbourne Storm, Manly Sea Eagles and Canterbury Bulldogs. Joining them in the home/away splits are the North Queensland Cowboys (who we do NOT play in Darwin this year, thank god) and Gold Coast Titans. While Parramatta missed a chance to play the Dolphins twice in 2023, given their clash against the new franchise is an away fixture they will be doing the full tour of Queensland next year.

The Wests Tigers surprisingly will only face the Eels on Easter Monday but easily the most pleasant appearance in the single game season matchup is that of the South Sydney Rabbitohs. While I solemnly maintain that Parramatta will one day break the stranglehold that the Bunnies hold over them, the fact they can only beat us once in the regular season next year is a huge boon.

If the Eels are to go one better in 2023 they are going to have to shine in prime time footy. A combined 13 appearances on Thursday and Friday nights, 11 of which occupy the premier slot, mean that over half their season will be played before the weekend properly starts. If my math is right, 9 of those games are against 2022 Top 8 teams which means the Blue & Gold will need to bring the heat.

The spread of byes for Parramatta is quite difficult to qualify as positive or negative. They pick up a handy pair of midseason breaks in Rounds 14 and 18 before getting the last week of the regular season off in Round 27. The Penrith Panthers made terrific use of a similar last week ‘bye’ in 2022 and subsequently unleashed a turbo-charged roster on the finals. Can the Eels do the same in 2023?

It sure feels like Parramatta always feature here but once again they find themselves with a NRL-high 3 5-day turnarounds. The Roosters are the only other club to share that dubious honour in 2023. While you don’t take any matchup for granted, thankfully none of the 3 short weeks leads to a 2022 Top 8 opponent (Bulldogs>Broncos, Bulldogs>Sea Eagles, Dragons>Broncos).

Not only do the Parramatta Eels kick off the 2023 season by hosting the Melbourne Storm on Thursday night at CommBank Stadium in Round 1 – it has the added gravity of two astounding streaks getting pitted against each other. Melbourne’s legendary run of 22 Round 1 victories goes on the line against Parramatta’s full four year stretch entrenched inside the Top 8.

The Eels have had the edge over their Victorian counterparts in recent times and I dare say a significant focus on Melbourne’s preseason will go into this one particular clash.

Easter Monday and the King’s Birthday long weekends are both the domains of the Parramatta Eels once again in 2023. Alas, both are away fixtures next year and will take place at Accor Stadium but that merely means more space to pack out in Blue & Gold with the day off work!

In 2022 the Eels fought through a battery of teams in the run to the finals that included Penrith, South Sydney and Melbourne. Next year they are staring down the barrel of a 6-game stretch before their last round bye that features the Cowboys, Storm, Roosters and Panthers. They emerged from this year’s gauntlet battle hardened and primed for a massive finals push, can they do the same in 2023?

I’m of the opinion the tougher draw the better. More tough battles = more experience. If you don’t make finals because of a tough draw, well you weren’t good enough to be there.

I don’t mind that thinking, except when teams with extra soft draws sneak in to undeserved finals spots.

Home/Away and Top 8 would seem to be the critical factors, maybe throw in 5 day turnaround. Would be interesting to identify the team with the softest impact from these, then compare with ours. That might give a feel if the draw gives a real edge.

So many factors that determine the draw. It will never be a matter of equality.

Great write up 40. I a already missing the football but not the media beat ups we’ve seen already.
One thing I will say is that Parra need to firstly plan well for the first patch of games which I know they will and also sort the bench out in terms of dummy half etc.
History says teams who play in the GF often one of them does not come back well the next year, so I hope we can be the team who stays strong.

We know that Parra always prepare to get good starts to the season Milo. Outside of that, it could be a headspace issue that the players need to sort out.

Great read Forty20. This season we will have to lose that ‘inconsistent’ mentality. Tigers and Bulldogs will be better and we cannot afford to drop those games. Reg and Junior may begin to fade at the end of the year after a long 2022 season and WC schedule. We will make use of those bye rounds esp Rd 24. I said after one of our big loses Bulldogs or Broncos that we needed 3 things to win a GF. 1. BA to seek out the coach whisperer. 2. A top notch defensive coach 3. A full time sports psychologist. That… Read more »

Pete it was like we needed to see the finish line to find that consistency, but overall it was an incredibly positive season.

At this stage it seems that Rein is still that person to be the back up.

Very happy with Rein as this backup, there’s a couple of NRL starters I rate him above.

I don’t think we saw Rein’s best in a couple of first grade appearances. Thought he tried too hard without thinking. If he gets a shot he just needs to get his job done.

A top four finish would be a very worthy finish with this draw. But we know that some of the teams favoured to do well will not and some teams that had a poor 2023 will improve. Can’t wait. Bring on 2023!

The unknown about the strength of opposition is the mystery of the draw. Yes, some 2022 finalists might falter, whilst other improving teams might make some teams draws unexpectedly tougher.

In 2021, the Titans, Knghts and Sea Beagles all made the 8. Of course their ‘22 fortunes were very different. Sometime back I had a look at the teams that made the eight over a number of seasons and found the eight changes by 2-3 teams each season. 2023 is going to be quite intriguing.

Shaun, it’s my belief that the draw is almost as instrumental in the 8 changing as the personnel is.

I do agree that it helps as some teams seemed to have a relatively easy ride. Then again, teams with a good roster on paper can have one of those seasons where nothing goes right.

I like how tough it is early a soft draw can lead to a team over achieving and getting found out later on like the sharks this year.

Personally I hate the Thursday games as I work nights and Thursday is a game I don’t get to see or watch.

I’m no fan of Thursday night too Offside. It doesn’t feel like part of the weekend.