The biggest week in three and a half decades is well and truly underway for the Parramatta Eels as they prepare for a brace of Grand Finals in the NRL and NRLW. Spiro joins The Tip Sheet in the midst of a whirlwind week of his own to look back at the milestone victories over the Cowboys and Roosters on the weekend. He, alongside Sixties and Forty20 then cast their eyes forwards to the monster Sunday as both glory and an incredibly unique slice of rugby league history lie for the taking.

There is plenty else to talk about of course including the mad scramble for tickets fans had to endure on Monday morning. The Dally Ms take place tonight so the boys take their punts on which Eels will feature while Shaun Lane is set to lock in for a further three years at the club.

Apparently we have no chance on Sunday. I think we be fine .

I was one who missed out on tickets, after going to all the home games and multiple away games – gutted 🙁 If anyone ends up with one spare, and happy to add a strange woman to their group, let me know! Wearing my Parra gear into work tomorrow anyway, for my one day in the office, and I’ll be cheering the girls and the lads on loudly from wherever I am on Sunday. I’m utterly convinced we can do it if we don’t get overawed by the occasion. Keep calm, play your own game, don’t get sucked into the… Read more »

I’ve been very flat this week. Possibly due to missing out on a GF ticket along with releasing some emotion at full time on Friday. A thought that came to mind during listening to the podcast and considering the recent wins is that maybe Parra has finally found its identity as a team? While Penrith are indeed arrogant (arrogance comes before the fall I hope) Parra have confidence and determination tempered with humility. If this is indeed their identity then that will serve the team long beyond Sunday.

Lets go boyz. They’re going to do it.

This is what n brown brings. He won’t turn his toes up 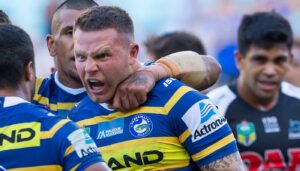 As a significant event in my opinion the win against the Cowboys is the highlight of the NRL era. One of the reasons it has been such a significant event is that it went against public opinion. Even some Eels fans have been calling for the head of our coach egged on gleefully and agreeably by a compliant NRL media. Even after the Dally M’s where the Eels have been essentially ignored despite being locked into the top four and now the GF. You have to ask why are the NRL journos not looking for the reason why the glass… Read more »

NOBODY is giving the Eels a chance. https://en.wikipedia.org/wiki/National_Rugby_League SCROLL DOWN on this wiki page down to Grand finals. Panthers already typed in as premiers, Eels as runners up. I am typing 2 DAYS from the Grand final!!! Even wikipedia don’t rate the eels. We’ll see on Sunday

I don’t think you understand how Wikipedia works mate.