What a magnificent night at our wonderful home, CommBank Stadium.

How was your journey through Thursday and Friday?

I’m normally excited when going to the footy, but lastThursday I was so nervous; ridiculously nervous.

I was nervous all day at work and right up to just before kick off. It was not through lack of faith in our team; rather it was because the Storm have traditionally found ways to win important games.  For both teams this was the biggest game so far this year.

I knew the Storm would turn up, play for the full 80 minutes and be allowed to slow the play the ball. While the crowd was loud from the start, I could feel the nervous energy amongst the fans. However, once we got that first try the noise in the stadium went up ten fold, the nerves left and I was so confident.

Friday morning, I put on my jersey in support of Jersey Day, and went to work with the biggest smile. It was amazing to see the number of Parra jerseys worn in a workplace 2 1/2 hours out of Sydney.

We don’t know what the next month has in store, but that experience on Thursday night was magical and one I will not forget.

Sitting in the Stands, three moments stood out for me as being crucial for winning this game and for increasing Parra’s chances in the weeks ahead. 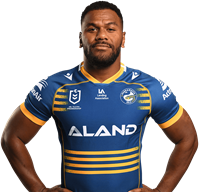 First cab off the rank was actually a series of moments involving Sivo. The big Fijian has never been renowned for his defence, but he really impressed with his quick decision making and his sliding. Maika also fielded a number of crucial cross field kicks with confidence, attacking the ball.

Sivo looks so confident in both attack and defence and that can be a massive point of difference for us going forward. When you think about it, there are plenty of quick, athletic wingers in the top eight teams but no one else comes close to Sivo’s brute strength and power when he is charging for the line. He now poses a threat both with and without the ball.

Melbourne are terrific at identifying and taking away an opposition’s strengths. From my vantage point behind the posts, I could see from the outset that Melbourne were condensing their defence to cover Lane, and Olam was jamming in to stop Moses. They thought they had done their homework.

However, Sivo’s try had been set up in the previous 60 minutes and from those games that the Storm had thought they’d reviewed when preparing for this clash. Melbourne came in to cover the possible short flat pass to Lane and Gutho went over the top. Sivo was ready, Gutho knew it was on and backed his ability to get the ball to his big winger. 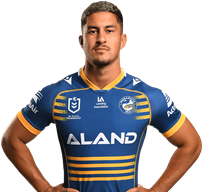 The Eels have been criticised for being one dimensional in attack and there have been times when this has been a valid shot. But now when Dylan gets the ball in attack he has three genuine options that can all set up tries; step and go himself, go short to Lane or out the back to Gutho and Sivo. When the Storm condensed to take away the Lane option we were smart enough to take the other options leading to two tries.

Tries in finals are hard to find and we are certainly no longer one dimensional. We will create opportunities. We just need to be brave and skilful enough to take them.

Finally we come to that Mitch Moses tackle. I loved the tackle itself, but I loved his passion and commitment so much more.

Mitch got smashed twice early in the game. Despite the undoubted pain, he got up and kept going. He stayed calm and did his job, with his kicking game providing Parra’s kick chase with the time to force the Storm to start sets near their try line. And this was all despite his finger still obviously causing him grief. 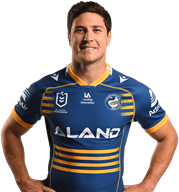 The top eight is wide open. Games will be close and teams will have heartbreaking defeats. For Parra to get over those final hurdles, unselfish and unrelenting commitment will be needed and that is why I celebrated that tackle. Mitch risked injury, he risked being pushed off and criticised, but he put his body in front and made the tackle. It was pure joy to watch and the crowd responded accordingly.

So we move to this week. Many thousands of fans will miss out on tickets, but the Panthers have won the right to host the game, and therefore it is deservedly a Penrith home game. Our players know that for every Blue and Gold supporter at Penrith on Friday night, tens of  thousands more will be wearing their jerseys, and watching on from their lounge or from the pub.

I’m expecting a tough, tight game played by two strong and committed teams but I have faith that our boys will show up, be relentlessly committed and give it their all.

My final message goes to the fans who will be  lucky enough to secure tickets.

Our players need all of you to be loud and get behind them. Wear our colours proudly, wave the flags and use your voice to get behind our team. Your screams of support will be representing everyone who can’t be there.

We are in our fourth consecutive season of finals footy, but this year we have as good a chance as anyone.

Bring on those Panthers. We are ready!

Man, that crowd was unbelievable, best home game in ages. The standing ovation coming back to us after scoring in the 2nd half, the bring on the panthers chant. WE ARE READY!

I always cheer and clap but I was a little more vocal during that game. It was awesome. We got tickets today looking forward to Friday.

Parramatta to win the premiership

I’m on board with that

Great read Shelley.
So important that win.
Sivo has Not Merely recovered from an ACL he has grown a new leg.
Moses is not only dancing in the Valley of Death. But he’s the owner of it! Just ask K Bromwich.
Go Eels!!

It annoys me that people still criticise Moses. You have to be blind or know nothing about League to not recognise how much he has improved. You can see how much he cares.

Every year since Sivo joining the eels he always got injured before the finals This year is a different stories.He’s fitter and stronger since he came back from that major surgery.He sacrifice a lot during the pre season to get back where he is now.there’s more to come from him 💪🙏🔥

This is easily his best form for the Eels

Sivo’s first year was very good and scored a good number of tries, there was however some areas where he was somewhat weak in but he had some strong points in his abilities to brush opponents off like flies, evidenced well against the sea gulls. Since injuries or something was down a bit I had reservations as to him being somewhat weak in a few areas and his overall game play was not far off ground level, and I considered him not up to NRL standard. Injuries didn’t help him through that time. This year he has shown a huge… Read more »

Colin two things that I have noticed since Sivo‘s return from injury this season is firstly his speed seems to be better. Watching on Thursday night live he seemed to me to be quicker than I have previously seen him. The other point I would make is the hesitancy seems to have disappeared from his game. He is attacking the high ball and when he got the pass from Gutho on Thursday night the only thought he had was run. In the past that far out from the try line he would have looked for support. I think you are… Read more »

Tks Shelley, your passion looks like it rubs off on your workmates. A few weeks back I noticed how improved the Fijian winger at St George (Ravalawa) had become and he was well ahead of Sivo in all round contribution. The gap has well and truly been closed, as you indicate a huge plus for us.Ditto Moses’ defence improvement.
Throw in Lane’s form, DBrown’s confidence growth, Niukore’ re-emergence, bits and pieces are coming together. And a big one…fingers crossed, our wide defence is improving.

This week, this match, is now so critical. All I want is a fair go from officials and for the players to determine the result, with the best team winning.

Sixties, no disagreement with that and can only hope the resultant refs are fair in their refing for all teams and players. In the past though they have usually gone to sleep and let the team do what they want, within reason.

We need to start well this week and if we don’t score first we must score second. If Penrith get the jump on us and get out past a try early they will kick it long, stand off side and not take any risks. Get into the game and our playmakers are more skilful. I cannot wait to attend.

My apologies Shelley I responded to Colin before reading your post.

Agree with all that you said. With regard to Sivo and his defence he has been showing attitude and aggression for a few weeks now. His defence has been impressive.

He is getting involved and not just standing in the wing waiting for the ball to come to him.

Sivo has definitely surprised. He is now a real threat. I agree his improved confidence in all aspects appears to be the catalyst for his metamorphosis. My only wish is that he would use two hands when grounding the ball. He has every supporter and every bunker representative scrutinising every try he scores. Heart in mouth stuff. Please Maika use both hands where possible. Sivo! Sivo! Sivo!

I agree and close my eyes every time he goes to put the ball down. It would be awesome to hear that chant bounce around Penrith this week. I can’t wait to attend.