What a turn around for the Eels from that Round 14 humiliation.

The team wanted to show that they are the real deal and brush off the Doggies performance as quickly as they could. That five day turn around meant that the Eels didn’t have to spend too long thinking about what was arguably their worst performance in years. The result was probably the best half of footy seen this season.

The dominance displayed by the Eels in the opening 40 minutes debunked any theories that the they are merely pretenders. An attitudinal change is required against lower ranked opponents, but with their mental approach placed firmly in the spotlight, the players can no longer gloss over it with lip service excuses.

Only time will tell whether the required new attitude kicked off against the tri-colours, but all they could do was start the ball rolling in the very next game.

Ball movement was at the forefront of this clash and the Eels produced the try of the year with a sensational team play for Maika Sivo to cross after 30 minutes. If you have this match recorded, you’ve probably watched in dozens of times already. It was a thing of beauty.

Outside of the ball movement, what I was most happy with across the 80 minutes was the work of our forwards. They just ran the ball hard and defended perfectly. There was none of the aimless ball playing or forced passing from the Dogs game. They bent the line with their running, laying the platform for the backs to shine. It’s what they do best when Parra are in form.

The Eels had the ball for 45 minutes with a tick over 19 minutes of that in the Roosters 20 metre zone.

There was a distinct victory for Parra in metres gained, with the Eels clocking up 2468 metres against the Roosters 2066 metres. Parra’s run metres (1853) were outstanding, including a massive 706 post contact metres.

It was Junior Paulo who led the Eels in running metres with an impressive 229, closely followed by his front row partner Reagan Campbell-Gillard with 208. Junior’s was near unstoppable with 105 post contact metres and RCG wasn’t far behind with 94 metres of his own.

Other forwards who eclipsed the 100 metre run mark were Shaun Lane (160m), Ryan Matterson (130) and the player I believe had his best game in a long time, Oregon Kaufusi (120m).

The backline weren’t without their contributors. The 2019 version of Maika Sivo returned with his barnstorming runs (157metres) and tackle breaks. Waqa Blake (147m), Gutherson (140) and Bailey Simonsson (105) also did their job.

Parra’s second phase play was on fire, with 20 offloads and 36 tackle breaks resulting in six line breaks and five tries. 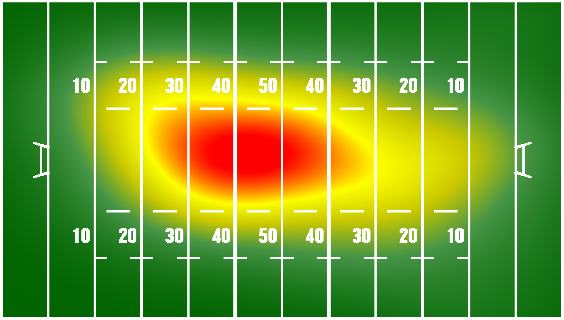 This heat map is typical of most victories. Ignore last week’s similar looking map against the Dogs. It was atypical for a bad loss. This is what you need to see in your run map, week in and week out. 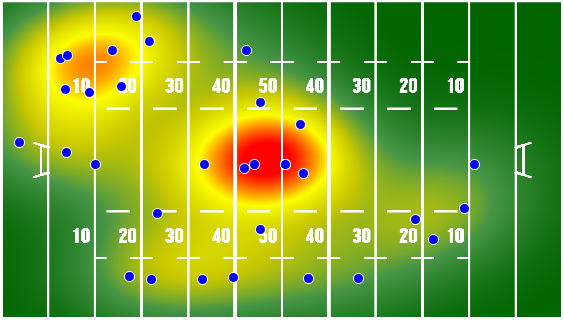 The numerous kick offs skew this heat map (see Eels left wing). There were only three starts in the Roosters red zone, which illustrates the potency of the Eels long range attack.

Parramatta made 312 tackles, including 38 missed tackles and 14 ineffective. With an 85.6% effective rate, some tweaks to defence still need to be made. Those 16.5% of attempted tackles not being completed, means Brad Arthur will want further improvement going into the second half of the season.

It was a brief appearance but it produced a stat too good to ignore – 50% of Ky Rodwell’s running metres were post contact metres.

I am actually giving this week’s award to a position – Parra’s Front Row.

Junior Paulo’s and Regan Campbell-Gillard’s stats were off the charts with both players producing very similar numbers. It was an awesome performance from the bookends.

We’ve just heaped the praise on Parra’s Round 15 performance and we now cross fingers, toes or any appendage at our disposal that this form is emulated for the last 10 games of the regular season.

Of the ten matches remaining, six matches are against current Top 8 sides. This includes two against the Rabbitohs and one each against the Storm and the Panthers.

Parra still have six home matches ahead of them.

Four of the home games are against the Top 8 sides, including those Panthers and Storm blockbusters.

Even though they sit outside the Top 8, the clash with arch rivals Manly at 4 Pines Park will not be easy, and nobody will dare take return matches against the Bulldogs (Commbank) and Tigers (Leichhardt) lightly.

I could mention that all matches are winnable, but for now let’s defer to the cliche of taking it “one week at a time.”

Might want to edit that final score at the top. Eels 26 not 24. Other than that great read!

Cheers Jarrad – didn’t notice that during the edit. Don’t want to reduce the margin of our win!

Good article to remind us how dominant the Eels were against the Chooks, crazy strong metres by the forwards. There’s always room for improvement as ineffective tackles highlight – but still savouring that win.