I could dedicate this entire post to praising the Blue and Gold Army for their support of the Eels at CommBank Stadium on Saturday night. Over 21 thousand fans packed into the stands on a cold winter evening, just five days after the Eels had meekly succumbed to the Dogs.

However, the focus of this week’s column must be about our team.

Last week I wrote about entitlement, and so it follows that this week the team is entitled to the praise they deserve.

Dare I say, they were even entitled to sing the team song and enjoy a post game drink. Maybe I should check in with Warren Smith before I suggest such a thing!

The attack was unquestionably superb, and the offloads and backing up came to the fore. But from my vantage point behind the posts it was our defensive resolve and decision making that pleased me the most.

There have been too many games this year that I have really questioned our ability to defend as a complete unit. But despite conceding the early try out wide, our backs on both sides of the field did just that. This forced the Roosters into making decisions under pressure and as we saw in the second half, it is very difficult to make that last pass under pressure.

I want to focus on two defensive efforts that demonstrated our players fulfilling their roles.

The first was Gutherson’s try-saver on Angus Crichton. Everyone stood and applauded as it was decisive, made at pace and signalled Gutho’s mantra for the game – get involved and have energy. 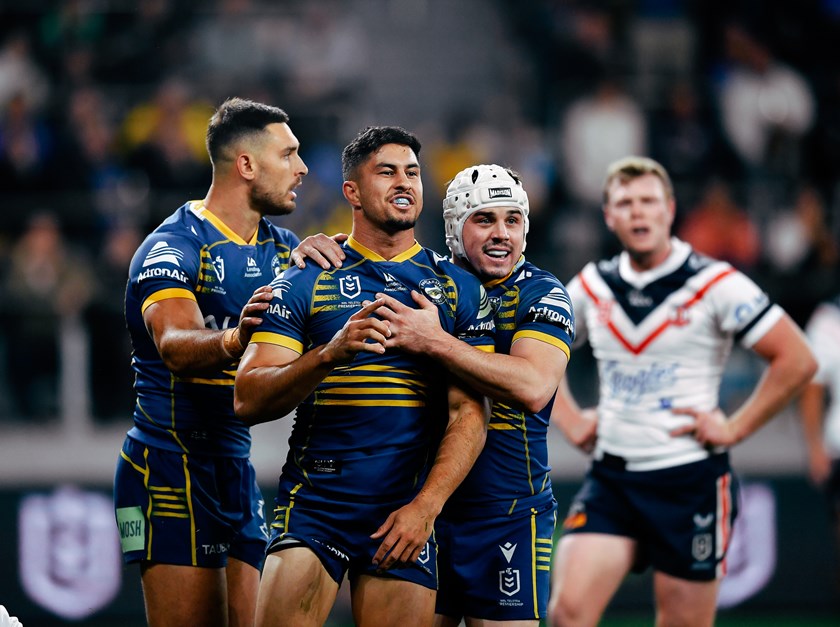 The second one was Dylan Brown’s try saving attempt on Joseph Sualili in the second half.

Whenever Blake and Sivo made the decision to rush in they did so together and with pace. To accompany this, Dylan Brown consistently used his speed to put himself in the position to make the covering tackle.

Though his effort was in vain due to a freak bounce, it was deserving of a better outcome. Brown was originally at marker and he still managed to get back in cover to stop the try. And 99% of the time, the ball would have bounced on.

Both Gutherson and Brown made the effort to put themselves into position to make vital defensive plays. In fulfilling their role, they allowed others to be confident in making defensive decisions.

Players don’t get selected in first grade if they can’t defend. It all comes down to commitment and trust. For some reason, Mitch Moses receives criticism for his defence, yet time and again he puts his body on the line to shut down, or at worst slow down, much bigger bodies. Again, it’s commitment to the role.

If Brown and Gutho are deserving of individual praise, they aren’t alone.

Our forward pack once again proved that when they work together they are almost impossible to stop. 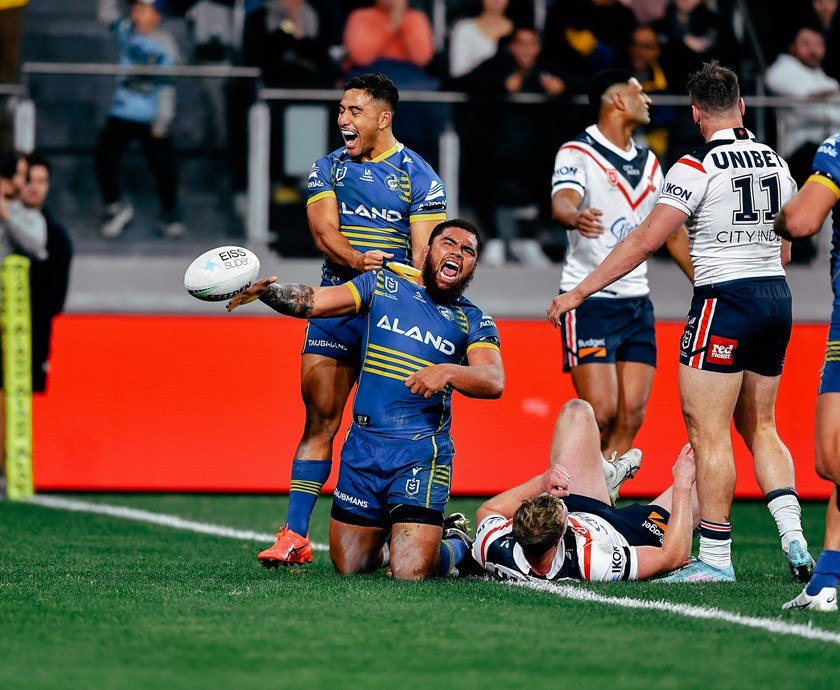 RCG and Paulo complement each other perfectly. Lane and Papali bring different but important options for our right and left edges and Matterson’s skill with the ball as well as his damaging runs and offloading make him an almost perfect number 13 in the modern game.

However, with both teams holding the ball exceedingly well, the ability of our outside backs to get the set off to a fantastic start allowed our middles to take the third or forth run on the back of momentum.

Waqa Blake was superb rucking the ball out. He almost always made 10 metres, got through the first tackle, landed on his front and played the ball quickly.

Over the years Waqa’s form has generated much discussion among the fan base, but we are now seeing what he brings to our team. He is decisive in defence, and in attack he attracts the attention of multiple defenders, opening up space on the left for Gutherson, Brown and Lane to take advantage. 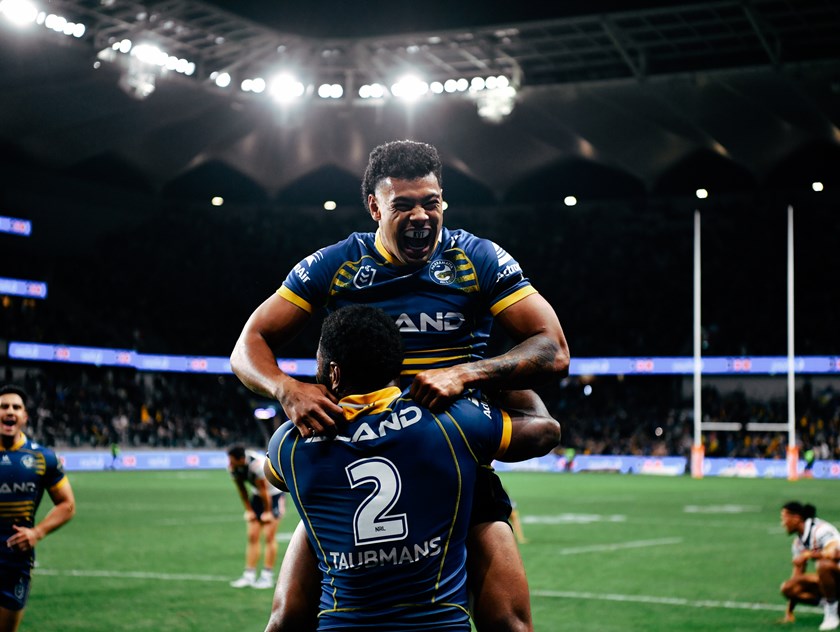 While the post match discussion still focussed on the frustrations of our inconsistency, I’ll stick to what I said last week.

Parra cannot change what has happened in the past, they can only make the choice to learn from it and improve.

In the second half the referee allowed the ruck to slow and hence offloads were harder to find as the Roosters defensive line was set. Parra stayed composed, made smart attacking choices and backed their defence. They didn’t try miracle short drop kicks, or pushed passes. They backed their attacking and defensive structures and got the victory.

I have sat through far too many thrashings from the Roosters to not celebrate a wonderful performance. Up until last year we could not find a way to beat the Roosters but the answers seem to have been found.

Parra’s next opponent, the Bunnies, have also dished out their share of thrashings on us over recent years. Despite their ordinary year, they will be another challenge for our team to overcome.

But my family, and the rest of the Blue and Gold Army, will again back the squad to get the job done. Just as we all did on Saturday night.

Shelley your comments on Warren Smith were spot on. I like WS as a rugby league caller but I am not sure what prompted him to come out and say what he did. Waqa Blake is an interesting story. I feel that possibly when he first joined us he seemed to have trouble working with Ferguson. It may be that he lost confidence. However since moving to the left he has found his game again. At the back end of the 2021 season when everything was going down hill I thought he was probably the Eels best player. Furthermore when… Read more »

John, he is one of our most consistent performers.

It looked like Smith typed that tweet in a hurry. He was so quick to try to lay the boot into the eels that he talked about them needing to beat three top 8 teams instead of the bottom placed teams that we have struggled against. Maybe take a breath next time champ.

He definitely made himself look foolish.

I whooped it up, at the game, and after. Always celebrate the wins. Warren Smith will never stop me. Yes this was so enjoyable, especially the way they played. (I too have sat thru too many 50+ beatings by the Roosters at the SFS.)

Graz, Smith’s comments were the height of absurdity. And he wouldn’t dare suggest it to BA’s face. I wonder how many times he’s called on a coach to not let their team celebrate a win.

Thanks Shelley; great article again.
Mitch reminds me of Chris Sandow; when they were first signed their defence was definitely not a strong point. Our coaching staff kept at them till they could at least throw themselves in front of a raging front-rower to slow them down. Mitch is now undaunted to take them front on and is achieving high effective percentages.

Tks Shelley, good read. That first half was certainly different. Going just on memory, I recall thinking how much room our first ball receiver was being allowed, very unusual for the Roosters, but when the ball went a bit wider there wasn’t as much room. I thought Mahoney’s distribution was varied and good. The Chooks tried that left short side shift so many times in the second half, and it didn’t yield anything, another unusual occurrence. We were on our game.