It was wonderful to be back in the stands watching our team take on our arch rival Manly. There was passion, banter and a “healthy animosity” around the stadium that was more than matched on the field.

Parra and Manly supporters love to hate each other (and their teams), and rugby league is always richer for such rivalry.

As for our Parramatta Eels team, they were far from perfect but competitions are not won in May.

What impressed me most was their willingness to dig in and stay in the fight. At 20-10, I was a little unsure as to how the game was going to play out. The last minute victory was amazing but I was equally impressed with our ability to be resilient, take the punches and wait for our opportunities.

One such player that demonstrates this growth in resilience and ability to stay in the fight is Mitch Moses.

From the stands, it is easy to see why he is a target for opposition fans. He is confident, outspoken and his position requires him to touch the ball a lot.

While his game, and that of all of the players, was not in any way perfect on the night, it was what he didn’t do that impressed me the most.

After returning from his sin bin he didn’t try miracle plays to make amends. He stayed focussed and stayed patient. He did his job, and given that his is arguably the most important one in our team, this was critical.

Moses trusted himself and the other players to get their job done and when he faced his moment to step up and make amends, he held his nerve. 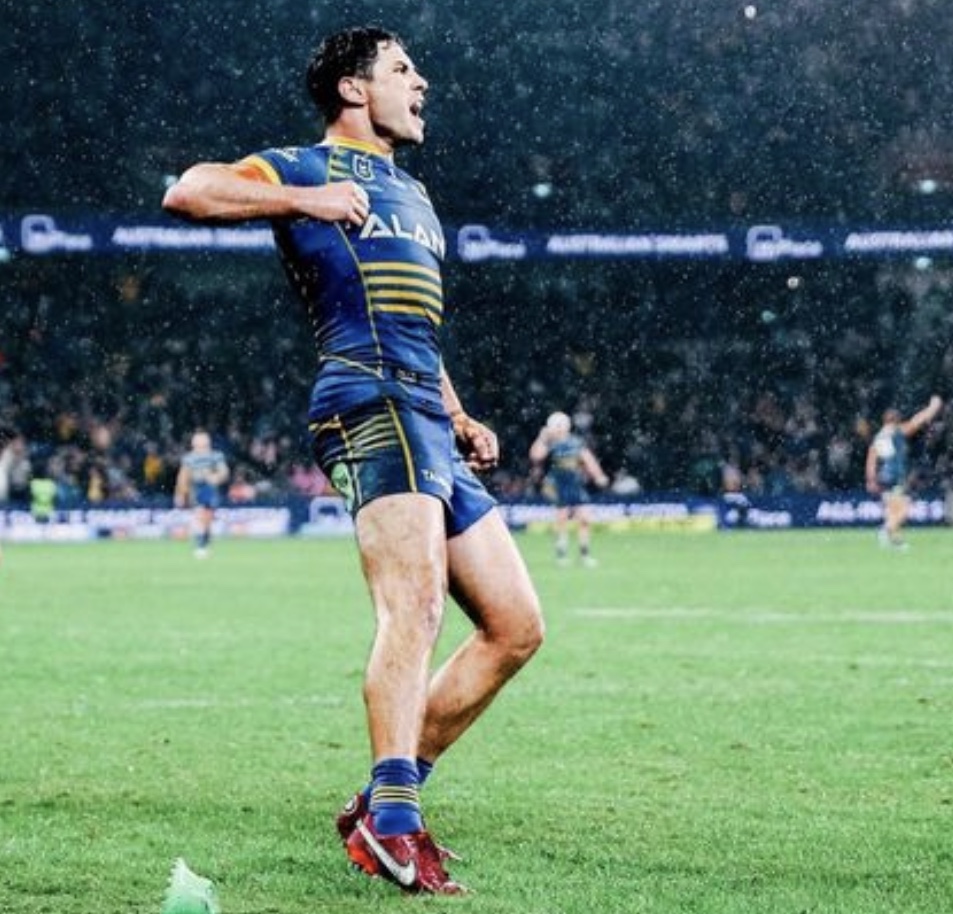 In terrible conditions, he guided the ball through the post and everyone saw the out pouring of emotion as he did so.

I’m not sure that the Mitch Moses who came to us in 2017 could have played as Mitch played on Friday night.

Whilst acknowledging that there are a number of exceptionally talented half backs in our competition, I would not swap Mitch for any of them. Furthermore, everybody could see that kicking that goal meant as much to Mitch as it did to the crowd.

It’s very apparent that playing for Parra is something that Moses cares very deeply about. Winning is important but it is evident that our half back feels passionately about the jersey that he wears. Watching that in action means so much to me, and it would obviously resonate with many Eels fans.

To his credit, Mitch has forced me to view him in a different light over the years. In 2018 I debated with family and friends about who to keep, Moses or Norman. I frequently wanted to keep Norman as I did not think Moses could become patient and focussed enough to be our champion half. I would have been far from alone in questioning his credentials.

Moving forward, Mitch will undoubtedly continue to face criticism, warranted or otherwise. And time will tell whether he will be the halfback to guide our Eels to a much yearned for title.

But watching him stay calm and focussed, before letting out such emotion as that match winning goal sailed between the posts, made me reflect on how valuable he is to our team.

And it made attending in the cold and wet more than worthwhile.

It always good to beat Manly and add to that the Broncos. The Eels have never been an arrogant team unlike the the other two just mentioned. As an old time Parra supporter it will always be a good season when we roll Manly and the Broncos. Anyone who remembers the seventies will know exactly why Manly is a particularly hated team. I guess we could add a few more to that list and many Parra fans will have their own pet hates but those two top the list. It was a great win and funny enough until the bell… Read more »

Sivo is close. Will BA wait till after the bye to give him more conditioning time? Team list Tuesday is nearly here.

We go as far as he takes us

Great read Shelley. Moses is Parramatta!! he’s maturing nicely and last year’s kick against Penrith surely was in the back of our minds but that kick didn’t put him off. That shows growth. We are slowly developing a stronger mentality and resilience in the contest. Not every week yet…. But, When the chips are down Parra has shown they can regroup and fight back. This is something we haven’t seen for a very long time. In recent years we would have lost that game. Moses sent to the bin for what exactly?? merely touching Turbo?? Yet, Hasler and his many… Read more »

It really annoys me that despite access to game reviews, stats and full replays the media and fan bases go with the predictable and stereotypical views even those that are straight out wrong. Parra have been called flat track bullies, who can only win at home and when they are in front because Mitch will drop his bundle and the team will loose direction. Our three most memorable victories this year against the Storm, Panthers and Eagles had us going into the last 15 minutes of each game behind and in two of those games we were away from home.… Read more »

Whinging Des and the Manly players didn’t mention the sin bin of Moses. The most diabolical decision by the bunker all night. And could have cost us the game.

I’m quite enjoying this long and winding road route we’re taking to September.

I think with our losses we’re learning what not to do.

A famous quote; “It’ll all work out in the end. And if it is not working out we are not at the end”

Manly are a team that I can’t stand, but I do give them credit for playing hard against the Eels. They had poor discipline, but they were impressive in being clinical in attack. What I was impressed with in regards to Moses against Manly is that he played a balanced game. Moses in the past either would be electric or quiet. Against the Sea Eagles, even though he wasn’t ripping them apart with his running game was still involved in setting up two tries in the first half, especially for the first. Sure, he put in two bad kicks that… Read more »

Tks Shelley. Moses post-Origin and injury last year just seemed to graduate. Another piece of his game that has far more upside for the team is running with the ball. His speed puts defenders in 2 minds and at present it looks great but ad hoc. Like Dylan’s ability to get his upper body through tackles when attacking gaps. Both still have a next level.

We make it hard for ourselves every single match.
The bottom line is if we can somehow fix our defensive fragilities we could and probably would , win the competition.
Every training session, should be focused on this aspect of the game, it’s the one facet that we are lacking.
Have we addressed the departure of Kidwell ? Have we found a defensive coach ? Or have we just lurched along the familiar route of – “she’ll be right BA can do that as well” ??

Rumour has it, BA has reached out to Trent Barrett to come in board, I’d say if that is the case he’d be an attacking coach like he was at Penrith. Midweek was a forwards coach, not a defensive coach, I believe we currently nor have, had a defensive coach over the past few seasons.
Hopefully that changes and the front office give him the extra headcount to help him out

Well done Shelley. Mitchell Moses is Parra through and through. His father John is a life long Parra fan. His brother Stephen was Parra ball boy in 2001. Mitchell played his mini/mod football at Winston Hills Hawks and All Saints. Played Harold Matts for Parra before a scholarship to Holy Cross Ryde saw him poached to the Tigers. The RL media wrongly attribute his junior days at Balmain. He came back to where he belonged in 2017.

Nice piece Shelley Mitch is a big part of what the Eels are. We really can’t afford to lose him and Dylan. If you look around to see who the replacements would be, the cupboard is bare. We will have to dig deep for this pair. There was an interview conducted on Fox by Benji Marshal with Mitch. Very good interview if you can find it on Fox. As part of the interview Mitch talks about being in a good place at the moment. His partner is pregnant with their first child and they are building a new home. He… Read more »

Team lists are out! Waqa Blake is named on the wing and I hope it plays out this way. The raiders’ wingers have some size, so to me it’s great to see Waqa back; and on the wing where I feel his defence is much stronger.

Last week I was listening to a podcast and for some reason they decided to discuss Mitch as the most overrated player in the NRL (which is very lazy content in itself). Especially in terms of those big moments. Well he nailed that goal (and a classic sideline cover tackle as well – don’t forget that!) and his progression this year has been noticeable. Wouldn’t want to swap him with anyone else either.

Lazy and boring and stereotypical, those podcasters mustn’t have been watching many Eels games this year

They sure haven’t. Alas there are certain players that despite what they do on the field, the perception that follows them can be hard to change.

So true. It’s amazing to see the parroting of opinions expressed by broadcasters. There are times when I’m watching a recorded broadcast after being at the game and I have to wonder what game the “experts” have been watching. I honestly think there are occasions when they are simply repeating preconceived thoughts rather than what’s happening in front of them.

Oh yeah. Don’t get me started on league journalism and commentary. With a few exceptions it is generally awful.