What an absolute cracking game of rugby league. Both sides produced a match which exceeded the hype, one which will remain near the top of the “games of the season” tree.

The forward packs went at each other from the outset, and the ferocity of the exchanges featured some of the year’s biggest hits. The recovery session would have been somewhat longer with some aching frames fronting up the next day.

Without question it was the magnificent turn around required from the Eels after their belting at the hands of the Cowboys in Darwin.

All Blue and Gold supporters would have been very proud of the effort the boys produced, but the burning question remains about the team’s inability to produce similar standards against the less fancied sides.

But let’s get back to the battle in the middle.

It was brilliant to watch the forward packs trying to gain the ascendancy from the opening whistle. Hard running and old school forward play gave the Eels a slight edge in the opening quarter of the game. After 20 minutes, Junior Paulo and Nathan Brown started to ball play and strangely the Panthers were able to cut back the Eels running metres.

After half time, Junior ran the ball a bit more in his second stint and this hard running again swung the momentum back to the Eels. From there, the forwards built pressure and two great tries came on the back of this.

Just simple hard running footy is what is needed most of the time, and it does produce results.

Time in possession was fairly even. The Eels had 39 and a quarter minutes with the ball with 19 minutes 45 seconds in Panthers red zone.

Junior Paulo was in fine form, leading the running metres for the Eels with 188. Isaiah Papali’i contributed 156 running metres and Ryan Matterson continued his purple patch with 155. Clint Gutherson’s 150 metres was the biggest return for the backs.

The Eels second phase was on song with 19 offloads. Junior and Matto leading with 4 offloads each followed by Tom Opicac with 3. 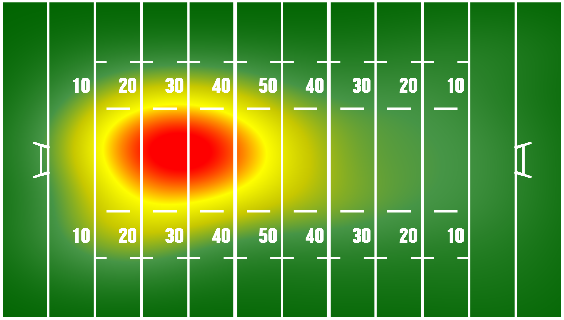 This map shows that the game was played in the middle between the two 20 metre lines. The Panthers map looks the same. They are virtually a mirror image of each other. Both sides went hammer and tong in trying to win that territorial advantage. 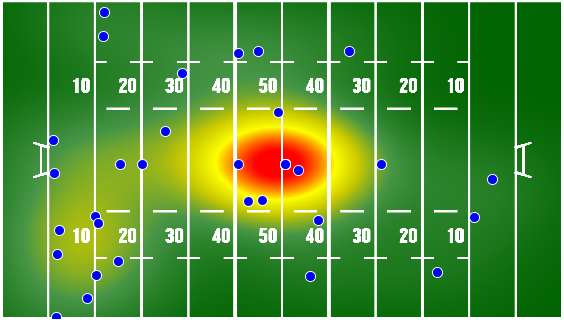 The Eels had some nice set starts in this game. You can also see the Panthers trying to pin the Eels down in their right hand corner. They were working over Bailey Simonsson all game, and to Bailey’s credit, he did a fine job of bringing the ball back with strong carries.

Parra’s back three of Bailey, Gutho and Perham all aimed up under extreme pressure and were strong contributors in getting out of their corners.

In defence, the Eels made 347 tackles with 33 missed tackles and 12 ineffective. This week’s tackle efficiency rating stands at 88.5%.

Our initial contacts are getting better, but I would say Brad Arthur still wants that missed tackle count down a bit more.

Isaiah Papali’i was the Eels top tackler with 47 with Reed Mahoney just one less with 46 tackles.

Discipline again was great for the Eels. Two penalties were conceded and 3 set restarts were given away. Add in 8 errors and that’s indicative of a controlled/composed performance from the Blue and Golds.

This weeks strange stat deserves a special mention as it goes a bit unnoticed when teams are trying to gain field possession and territory – Kick Metres.

The Eels kick metres were off the charts with 1039 metres. This incorporates all kicks including touch finders for obviously they result in gained metres.

I can’t recall a game where the Eels kicked over 1000 metres before. Mitchell Moses contributed an outstanding 888 metres to the total. The accumulated metres might go unnoticed during the game, but they certainly go a long way towards achieving victory.

The Ice Man, Isaiah Papali’i takes out this week coveted prize with a mighty fine performance. Just have a look at his numbers which make the selection self evident.

A measure of the quality of this game is that both sets of fans should be proud of their teams.

The recent disappointing responses to defeat is something that I do want to call out. Some Eels fans carried on appallingly following the Cowboys clash. After the Panthers lost, some Panthers fans were looking for something to complain about. The emotional responses may have been different, but both involved blame seeking that gave no credit to the opposing team.

The Panthers fans need not complain. They were treated to a terrific game of footy and even after losing their side remains the bench mark.

Perhaps BA and Gutho provided the best way to respond to tough calls. When both were quizzed about the missed knock on by Kikau in the lead up to the try right on half time, they wouldn’t be drawn into any criticism. Nor was there any reference to a few off the ball incidents by a certain number 6.

Ultimately, the game was not determined by a controversial error, and until the complaints surfaced about Murf running across the field during a Cleary conversion, the talking points had mostly been about the high standard of the footy.

So now we head to Brisbane for Magic Round and another tough game for the Eels – this time against the Roosters.

The Tri-Colours will be buoyed after finally getting a win, but it was against a pretty poor Titans side. Before that, the boys from the East of Sydney had struggled.

Once more, the Eels will need to bring their ‘A’ game. Playing that controlled, physically dominant style on a consistent basis remains critical to the Eels premiership campaign.

Thanks Colmac !
That was very helpful. Often we can miss someone who worked really hard but was not in our line of vision. Only the stats can show us that sometimes. I am particularly appreciative of your comments about the over the top splash from the previous week. We need to be good loosers, as well as great sports when we win. Go the Eels.

Thank you. Was a great game of Rugby League, played TOUGH by both teams with no CHEAP shots. Exactly how it should be played

Good analysis colmac.
Moses’ long kicking game made a difference, 1000m is some high water mark.
Much better in the missed tackle department.
Surprised the Riff heat map is a mirror image of the Eels – it felt like the Eels were constantly starting 10m out and the Riff 30m out.

Missed tackles. Parra was under immense pressure during the second with Penrith pushing hard into Eels territory but, their second half missed tackles decreased by 50 percent.
I believe the first half was 16 missed and 8 the second half. That was an incredible effort and no doubt contributed to their win.
Defence and ball control is an absolute necessity for this competition. Get your defense in order and the attack will come with points.
A wonderful effort by the team.