The Greystanes Devils JRLFC has produced NRL players such as Ryan Morgan, Liam Fulton, Tim Robinson, Steven Crouch and Brett Cook. They’ve also won the Parramatta Junior Club of the Year, and the NSWRL Grassroots Club of the Year.

Yet despite such impressive achievements, it’s the love that local youngsters feel for the club which creates the greatest pride. 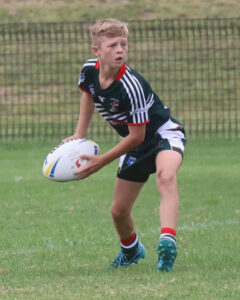 Craig McLaren is a second generation club official, with his father Greg being part of the committee that guided the club to their debut in 1979. Now famous for their wicked red logo, just a single vote prevented the Devils from being named the Greystanes Greyhounds.

Back then, the club began their journey in the Parramatta District Junior Rugby League with only three teams, and remarkably the under 8s won the competition in that inaugural year.

A 1980s housing boom in the Greystanes area, along with Naval housing development, provided the impetus for club growth, and at one stage the Devils fielded as many as 25 teams. In leaner times those numbers dropped to as low as five. 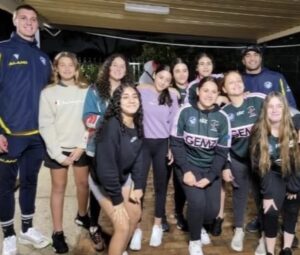 Marata and Shaun visiting the Devils

However, the club now sits comfortably around the 15 team mark, including girls teams and the Over 35s Masters.

As explained by Craig, “We’ve never been a big club, probably never will, but it’s a great family club and that’s why everybody enjoys being involved in it.”

The girls teams are arguably the most popular sides to wear the Devils jersey. Last year the club fielded an all girls under 12s team in addition to the under 14s, and those teams always attracted the greatest support.

Outside of the aforementioned Devils players who have gone on to play NRL, Jai Arrow’s father Raymond is a Devils legend, whilst Nicho Hynes family have been heavily involved with the Devils over the years, with his grandfather Don Wilson being a life member. Such are the family ties, Nicho attended the club presentation day last year to hand out trophies. 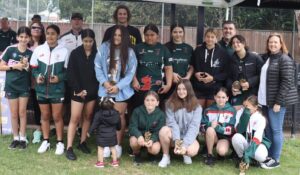 Nicho Hynes at the 2021 presentation day

When asking about winning the NSWRL 2019 Grassroots Club of the Year, we were told this:

“It’s really an acknowledgement of everyone in the club – the players, the mums and dads, the volunteers, the sponsors.” In essence, the award validated what the Greystanes Devils club does for the community.

What Craig was too modest to speak about, but Clay did inform us of, was Craig’s own 2020 NSWRL award for Volunteer of the Year (Sydney north region). That level of modesty is typical of rugby league volunteers, and is exemplified by the Devils. 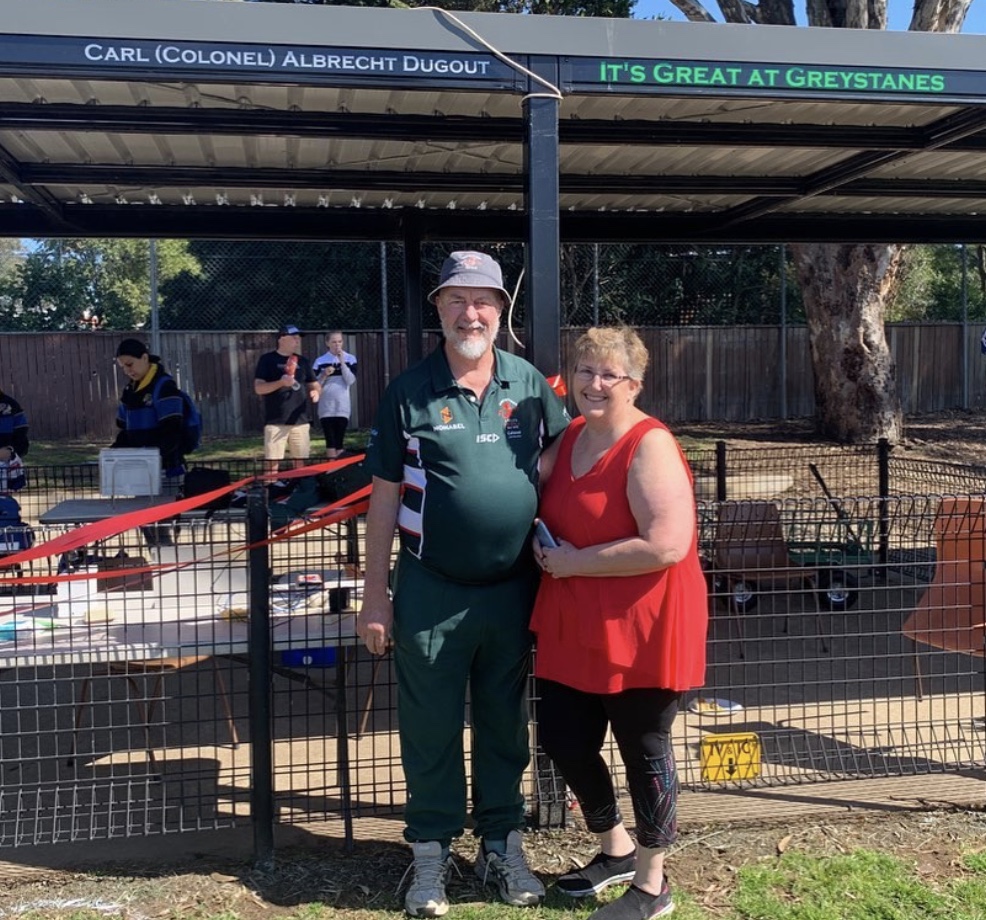 Devils Legend, “The Colonel” Carl Albrecht at the dugout bearing his name and catchphrase

Like all junior sports organisations, volunteers are the lifeblood of the club. The Devils reckon theirs are a special breed. 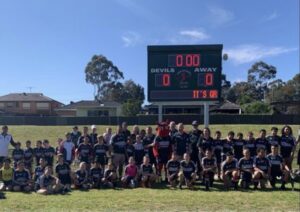 Roles like club secretary are literally full time in terms of commitment but people such as Elizabeth Peel put their hand up to take it on. Greystanes people are at the ground from sparrows on match days to get the grounds and the canteen ready, and all the coaches, managers and trainers are mums and dads simply doing their best.

Who makes up the Greystanes Devils community?

The word local seems central. The young players of all ages all know each other. They go to local schools. They hang out together. The mums and dads know each other. The older players look after the younger ones. A lot of the players stay for the whole day, supporting the entire club. 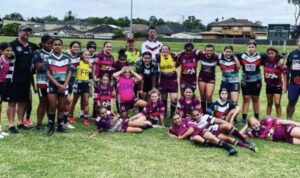 Furthermore, the club has become multi-generational with current players following in the footsteps of their fathers.

It’s not just the football that ties the community to the club. The Devil’s social calendar adds to the family connections and engagement.

The Devils Annual Charity Day raises money for causes such as prostate cancer, brain cancer, headspace Australia, “Budjery Manya” and Mitochondrial Disease. After selecting a charity which is special to someone in the club, an event jersey is made and then the allocated match day features fund raising rides and a range of stalls. 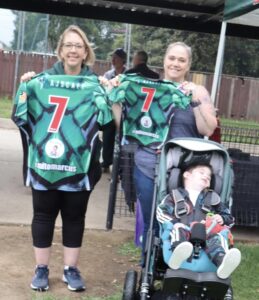 Marcus and his Hulk jersey

The fight against Mitochondrial Disease is a charity of particular importance to the Devils, with four year old Marcus engaged in a battle with this horrible disease. In honour of him, the club had a special Hulk super hero jersey made which he loves.

Another recent cause supported by the Devils was “Budjery Manya” – a program supporting Indigenous families of Western Sydney. The jerseys made for that day were designed with symbolic importance for local Aboriginal history and incorporated the revered warrior Pemulwuy and the old Prospect Creek.

It’s difficult to imagine communities existing without junior sports clubs. And the Devils go above and beyond to connect families within the district. You can throw in the Devils father/child camp that attracts around 120 participants, and the annual Christmas bike ride, a massive family day that rounds out every year. 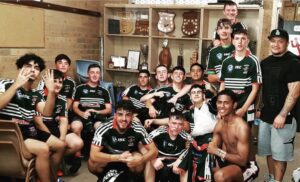 Despite the hard work of dedicated volunteers, there is always a significant cost to running the club, and the Devils don’t have the benefit of having their own licensed Leagues Club.

Financially, the club is able to make ends meet with a generous annual grant from Parramatta Leagues Club, as well as match day canteen revenue. Sponsorships are also essential, and major sponsor DDP Electrical has supported the Devils for around two decades. Darren from DDP has been involved as a player, a coach, a parent and a life member and exemplifies what the Devils means to the community. 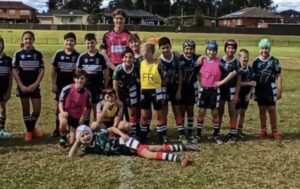 The assistance of such sponsors means that the Devils can provide every player with a jersey, playing shorts, playing socks, training shirt, training shorts and a polo. It also means that on Presentation Day, every kid gets a trophy.

So back to those local kids living in their Devils gear – at the shops, riding around on their bikes, and even at school on mufti days. What greater vindication could any club have for what they do!

The Greystanes Devils are always happy to welcome more people into their community, no, let’s call it their extended family. If you’d like to be involved as a player, coach, volunteer or sponsor, please contact their club secretary Elizabeth Peel on 0434 530808 or via email at greystanesdevils@outlook.com

Our full chat with Craig and Clay will be available on an upcoming episode of The Tip Sheet.

Great article to all involved. Go the Devils

Cheers Anon. What a terrific club!

Great story about the Devils. Nicely done The Cumberland Throw. Can’t wait to hear the podcast.

Appreciate that GM. Podcast will feature next week. Craig and Clay go well.