Another tight affair at Newcastle for our girls, but unfortunately the return visit saw the Eels finish on the wrong side of ledger against the Roosters.

The Parramatta team put in a superb performance and at one stage looked destined to wrap up a finals spot in their inaugural year. It will be a sensational feat should they achieve it.

After falling behind by 12 points early in the match, the Eels did a magnificent job to claw their way back. It was a measure of their self belief and their composure.

Abbie Church was the first Eels player to cross the line after good lead up work from Maddie Studdon and Botille Vette-Welsh. With the score pegged back to 12 to 6 at the break, the signs from there looked good.

As the second half unfolded, the Eels hit the lead with two tries in quick succession. 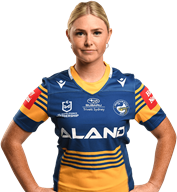 Christian Pio scored in the 43rd minute with an opportunistic try after a Studdon pass went to ground. It’s almost a given that when the ball hits the ground, defenders stop and wait for the whistle to blow. And that’s exactly what the Roosters girls did, whilst Pio got a favourable bounce to cross untouched.

Then in the 46th minute, Maddie Studdon created her second try assist with a superb ball to Tiana Penitani who ran a great line to cross for the try that put the Eels girls in front.

Unfortunately, the girls couldn’t hang on with the Roosters getting across to equalise the scores, before a late Zahara Temara field goal secured the win.

Stats wise there were some outstanding performances. 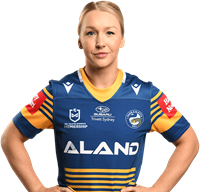 The pairing of Penitani and Horne both ran over 100 metres with 100 and 103 metres respectively.

In the forwards, Christian Pio ran for 113 metres, followed by the skipper Simaima Taufua with 106 running metres and Kennedy Cherrington with 104 running metres.

In defence, the Eels make 283 tackles with 23 misses and 2 ineffective. This gave a tackle efficiency of 92%.

Taufa made a monster 49 tackles with just 1 miss. She has got a massive motor. What an effort!

Discipline saw the Eels make 9 errors and give up 3 penalties.

This team is looking better with every game.  They’ll be up against the competition’s premier side in the Broncos at Suncorp this Sunday and looking to cement their finals spot.

Make sure you watch this game as it will be a cracker.

Simaima’s numbers are insane! What a player.