In their wildest dreams, the NRL could not have orchestrated a better conclusion to Sunday’s NRLW triple header at McDonald Jones Stadium.

History was always going to be made with the Eels and the Knights squaring off in their NRLW debuts. One of the clubs was destined to record their first ever win and for most of the match it seemed like the home team was going to come up trumps.

Ultimately, it was a sensational way to open the delayed 2021 season, with the match decided by the first field goal in NRLW history. Yes, history was made, but not how most expected. 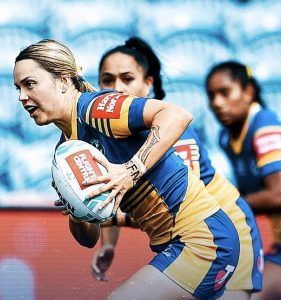 Both teams brought the intensity we’ve come to expect from the NRLW, and the game hung on a knife’s edge until that Maddie Studdon field goal in the dying seconds broke the deadlock.

They did it the hard way, but the Eels had secured their first victory.

Congratulations to Tiana Penitani who was the Eels inaugural try scorer crossing in the 30th minute. Maybe it’s an honour she should share with left winger Rikeya Horne after a certain try was butchered by Penitani’s block run earlier in the half.

Of course, that disallowed first try was a stark reminder that not all went to plan for Dean Widders’ team.

Did the excitement of the occasion pump the girls up too much?

The Eels had ample opportunities to score, especially in the first half, but final play options went to ground or the final pass was thrown when it just wasn’t on.

How was the match won?

The score line was almost perfectly reflected in the possession rate, with the Eels having 49% of the ball to the Knights 51%.

The Eels completed 20 sets out of 31, giving a completion rate of 65%. Ball control and handing looks certain to be the focus of this week’s training sessions. 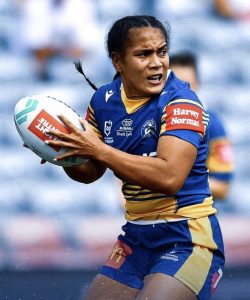 In total, Parramatta came up with 5 line breaks with fullback Botille Vette- Welsh leading the way with two on her own. She also topped the run metres with 178, closely followed by our skipper Simaima Taufa with 173 running metres.

The centre pairing of Tiana Penitani and Jocephy Daniels should also be acknowledged after topping the 100 run metre mark with 134 and 117 metres respectively.

Defensively the Eels completed 262 tackles with 22 missed tackles and 4 ineffective tackles. This equates to a tick under 91% tackle efficiency.

Leading the way in defence was inspirational Captain Simaima Taufa. Her 39 tackles rounded out a best on field performance from a player who leads by example. She was ably assisted by Kennedy Cherrington who contributed 29 tackles.

The Eels discipline could be an area for improvement after they conceded 8 penalties on top of 11 errors.

All in all it was a very strong first hit out for the Eels who will no doubt be better for the run. Given that there are no trials in the NRLW, we had to expect a few cobwebs would need to be cleared.

It’s another week on the road in round 2 as the team take on the Dragons in Wollongong. In a shortened competition every match is critical so I’m again expecting a cracker encounter.