At what point will Eels training narrow its focus to preparing for the upcoming trials?

Monday’s session left me believing that such preparations had begun.

After watching Wednesday training, I had more questions than answers.

Let me explain why.

For the majority of this preseason, with just the odd exception due to player absence, the player combinations during opposed work have rarely varied.

I don’t report on how that’s organised because there are elements about Eels training that I naturally don’t include in my write ups. There’s a line between providing feedback for fellow supporters and revealing points of difference that might exist in the team’s preparation and I guard against crossing it.

On Monday, everything about the combinations changed. There was a mix of players on each opposed team that I hadn’t seen before.

My immediate thought was that one of those teams could be the one to take on the Dragons. It seemed logical that at this point they could be working towards their first match.

When Wednesday arrived, there were a few more changes. Enough for me to second guess my initial reaction to Monday’s line ups. Then again, there will be more than 17 players who take to the field in the trial.

It makes me even more curious about this Friday, given it’s typically the major opposed session of the week.

Now for the major takes from Monday and Wednesday. The contact in the Monday session was closer to the type of “collision” witnessed at training during the season proper. Anyone who’s watched the team prepare during the season knows that there are fewer hits as the forwards mostly “surrender” in the tackle. Obviously the team wouldn’t belt the tripe out of each other three days before a game.

Waqa Blake caught the eye once again. He has been very sharp throughout a preseason which has easily been his best. One of his line breaks saw him explode through the defence line as his acceleration immediately put him ten metres past the closest defender.

The Wednesday session definitely lifted in intensity, with very little easing into defenders. I’d place the level of contact at least around 80% of premiership level.

Young outside back Josh Tuipulotu had a day out on the wing courtesy of Clint Gutherson being on fire with his involvements.

Josh, who was a fullback in the same Eels junior rep teams as Jake Arthur, Will Penisini, Sam Loizou and Sean Russell, scored early after having space created from a superb pass by the King. 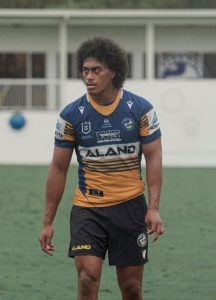 Not long after, a smart short side play sent Tuipolutu down the wing before he linked with Mitch Moses for the try. He’s always been a talent, but with Naiduki and Russell likely to own the NSW Cup wing spots at the start of the season, I’d expect both Josh, and probably Matt Komolafe, to commence the year in Flegg.

Naiduki also produced a solid session. I was particularly pleased woth the intent in his kick returns.

Jordan Rankin produced a standout play after he seemed in trouble on the last tackle.

With defenders placing him under pressure as he looked to kick from just inside his half, he took the odds to stepping and running, eventually breaking the line. As the defence finally converged he placed a perfect kick into the in-goal to force the drop out.

Mitch Rein continued to justify his recruitment with another impressive showing. He enjoys engaging the defence, and in one memorable play found Moses running a great line which put him into the clear.

If I was to be critical of this session, I thought that there was a little too much dropped ball. On the few occasions that I’ve noted the pill hitting the turf, I’ve postulated that it’s come off the back of defensive pressure. That was undoubtedly a factor, but it was a little too frequent today in comparison to other sessions.

That said, the opposed component lasted longer than usual, and I thought that the squad finished the session strongly.

So back to the question. Has the focus shifted to preparing for the trials?

I’m looking forward to Friday for the answer.

(Photos of Waqa and Josh courtesy of Bocko, Eels media)

Mr Sixties, for folks who are so far away you are our eyes and ears. Training reports are our lifeblood until the season starts and when we don’t receive them on time it creates nervous tension. Just the same we sincerely appreciate your insightful reports. Dropped ball. Your concern prompts the question were they dropped when running and catching or when tackled. There is a difference. Running and catching the player has his eyes elsewhere while when tackled it is loose control. Both are a problem. Waqa Blake, you have mentioned him a number of times and it seems he… Read more »

Zero, to be honest I hadn’t noticed how Waqa carries the ball. I’ll be looking at it now.
I’ve given Woody and Ky Rodwell a mention at different times. Woody has been at All-Stars training this week, but he looks fitter this year than last. His impact with hit ups is good. I’d prefer to be watching opposed from a different vantage point to observe his movements in defence.
Rodwell Is having a very good preseason. I like his work rate. I’ll tip him to add more NRL games to his resume this year.

When will our Nsw cup and under 20s squads be named?

I don’t have an answer at this stage Gary.

What positions are Lane, Niukore, Papali’i and Matto primarily training at. Really hope Lane goes back to the middle with Papa and Niukore in the back row.

I don’t, Lane has the left edge covered and is a very good rotation to the middle when BA wants to give the Big Blokes a rest there. He is also a different body shape on the edge which creates diverse attacking options and defensive confusion for the opposition when he is rotated to middle and someone else comes on to his left edge.

Anyone could tell Lane played his best footy last year when he was playing in the middle. You maybe right in theory where his body size is beneficial on the edge, however it is of no use if his performances on the edge don’t support it. When Lane plays in the middle, he deserves his spot in the team. However when he plays on the edge, every eels fan wants him dropped because there are much more reliable and young players with greater potential waiting for their turn as a regular NRL player such as Kaufusi (even though he is… Read more »

Electric, every player that you listed is a middle so we are well served for middles.

See my reply above.

I gave my tips for the round 1team, and I tipped Matto to get the lock spot with Nathan Brown being in some doubt for the start of the season. I also tipped Papa and Lane to get the back row spots in round one. Marata is suspended but he’ll walk into a bench role when he returns and can be used wherever the need arises.

I believe Tuipulotu’s injury was the turning point in that game.

Absolutely no question that it was the turning point, and it was an illegal tackle that put him out of the game – tackled in the air and It was an incredibly dangerous tackle.

Are you the same Pou who posts on League united?

There’s only one Pou!

Interesting I just read an article on Fox about the Storm.

With the exception of 3 or 4 players all of their current roster is off contract by the end of the 2023 season.

Well, like the eels it’s a club falling apart!
No doubt they’ll turn that scenario into a massive positive. They always do.

Grunta what makes you think the Eels are falling apart?

I’d like to think that Grunta is being sarcastic.