“We are living the dream playing for the Parramatta Eels”

With those words spoken by Simaima Taufa, the Parramatta Eels NRLW team placed a huge an exclamation mark on the end of a most impressive training session, staged for the first time at Kellyville HQ.

The preseason for Parramatta’s NRLW squad has been completely different to that experienced by an NRL side. Training has been conducted at a number of different venues, and the ladies have to fit jobs, study and family duties around their rugby league commitments.

It harkens back to the semi-professional days of the NSWRL premiership, and perhaps the passion that the players have for the game is also a reminder of those times.

Back to this morning. A session at Kellyville could not be missed by The Cumberland Throw! 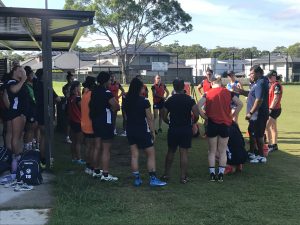 What absolutely smashed me in the face was the positivity and joy within the group. From the staff to the players, Simaima’s words seemed to speak for everyone. The enthusiasm around this inaugural Eels team is infectious.

This was an opposed session which exemplified how the team want to play their football. That philosophy was emphasised in team addresses by Simaima Taufa and coach, Dean Widders.

The Eels will make their presence known in their physicality and in how they will back themselves. They will impose themselves on the contest.

Today, the team played a mix of structured and unstructured footy. That’s nothing unexpected. You might consider one as the foundation and the other as the game breaker. What stood out was the confidence.

The spine has both skill and representative experience, which means that they won’t shy away from playing what’s in front of them. 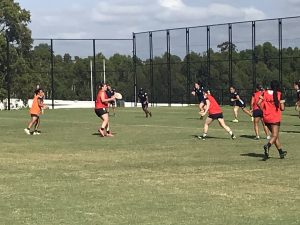 Time to defend as the red team shift left

Playing that eyes up footy doesn’t work without team mates reacting quickly. I thought that the support play in this session was first class. Whenever a line break was made, there were always support runners streaming through. Furthermore, I witnessed the pace on the flanks – and there could be a crowd favourite or two out wide.

The pack aren’t afraid to offload in traffic so there were breaks made through second phase play in addition to set pieces. It wasn’t all perfect. Sometimes a pass went to ground, but the intent and self belief will ensure that they keep a positive mindset.

With so many positives to report on, one of the most pleasing aspects for the coaching staff must have been the talk. It was non stop in both attack and defence. There will be so many new combinations across the franchises this year, so communication is going to be critical. Early indications are terrific for our Eels. 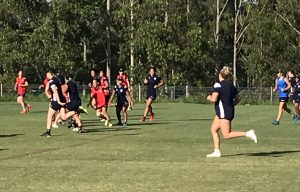 Setting up to the left

Let’s talk leadership. The coach, Dean Widders, is incredibly encouraging and he delivers instructions with clarity and intelligence. His background as an NRL player was all class, and nothing’s changed.

But the playing group will drive the team culture and the senior players have helped this team to bond and importantly given the younger squad members the confidence to feel like they belong at the elite level of the game.

When the session was over, the good news was that the squad came through relatively unscathed – just the odd ice pack was required.

There’s now under a month until this team puts the preparation into action in their chase for a first year title.

Don’t forget, the NRLW kicks off with that massive triple header at Newcastle on February 27. Parra takes on the Knights in the final game that day. Then, there’s the huge double header – the Eels NRL and NRLW take on the Titans at CommBank Stadium on March 13.

Get your tickets, and sign up for your Eels NRL and NRLW membership. It’s going to be an amazing year.

Your Eels NRLW squad is:

Apart from referencing the words of Simaima Taufa, I made a point of not naming the players who provided the morning’s highlight moments. Some of those who shone were well known to myself and others. Others less so. With no guarantee that I’ll be reporting on further sessions, I didn’t want to single out just a few for a mention.

I want to thank all of the coaching and support staff, the players, and the Eels directors and management present this morning. It was terrific to meet the players and gain an insight not just about the type of footy that they’ll play, but also how special it is for them to pull on the Blue and Gold jersey.

Tess Staines will score plenty for the Eels..Oh yeah, the girl can play…and is a flyer who knows her way to the line..Onya Tess.

Thanks for that feedback Pete.

It’s an exciting time for the young women of the NRLW. They get to be the pioneers for their sport. I wish them all the luck in the world. May they have fond memories of the experience as time goes by.

Looking forward to seeing what the NRLW side can do, wish them much success. I watched Abbi Church develop through another sport across her younger teenage years playing at representative level consistently. Great to see her reach such a level and play for the Blue and Gold. Great ball skills and agility.

Thanks for that feedback about Abbi, Anthony. I’ve heard great things about her form through the preseason.

Really looking forward to the double header at CommBank Stadium against the Titans. I hope there is a massive turn out to watch the NRLW before the NRL.

I reckon it will be Jim

ill be there, got my ticket yesterday!!

I reckon it will be close to a sell out.