Second week of pre-season – will the new faces continue to measure up?

The first week was a solid ask of the squad, but experience tells me that there’s an incremental build in the conditioning component each week. As explained in the second report, placing a sudden heavy load on an athlete after a relatively inactive off season can be a recipe for injury.

Also of interest – will any more players return to training this week? This was answered with the appearance of Joey Lussick. Apart from the Origin fellas, the remainder of the squad can now be expected to front up next Monday.

Until then, the new blokes greatly outnumber the incumbents.

Once again, this was a combination of conditioning and football. Covering the Eels basic structures and methods before the majority of the established NRL players join proceedings is quite logical. There’s nothing complicated as yet.

With warm ups completed, the first task was running mechanics and sprints. Form was more important than actual pace as players were probably asked to run at about 80% of their top speed.

However, I don’t think you could ever expect someone like Ray Stone to ever do anything at less than 100%. He fairly flew down the field, leaving his group in his wake. 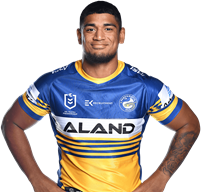 Big Oggy has returned ready for a big preseason

Others worth noting during the sprints included the big men – Dave Hollis and Oregon Kaufusi. Both have a surprising sprint in them, especially given that they actually appeared to be following instructions about not hitting top pace.

Watching the incumbent forwards bust a gut like this, the value of adding quality new recruits like Cartwright, Papali’i and Hipgrave is emphasised. These fellas have designs on playing first grade and turned up ready to stake their claims.

So when blokes like Kaufusi, Stone and Hollis are literally in BA’s face with strong training performances to remind him of their presence, the winner will always be the team.

Maika Sivo looks at his best in such sprints. Unfatigued, power in his stride, he is an imposing sight. I hope to see him reproduce such explosive bursts in matches.

Conditioning continued with sets of 120m and 140m runs. It was no surprise to watch the likes of Dylan Brown, Jake Arthur and Haze Dunster absolutely cruise through their work, and Papali’i again made an impression. As a group, the squad encourage each other and would have the staff happy with both their attitude and effort.

As expected, defence featured in the session. Today the focus was on marker movement, from peeling off the tackled player to their defensive decisions as the ball was played. Communication is obviously important and these marker basics are critical in what happens to the players around the ruck.

From there, the squad transitioned into the kick-chase.

At first this was done as a territorial kick from their own 40m line against only the opposing back three. There was probably as much to learn for the back three fielding the kick and facing the oncoming defence line as there was for those in that line.

More defenders were then added to provide pressure on the kickers and support for the back three. The position on the field was varied as was the type of kick, with it eventually becoming attacking kicks in and around the quarter. It was also followed up by defending for several tackles as the runners tried to ruck it out. The longer that the kick chase can keep the opposition pinned within the 20m, the better.

As per usual, the session concluded with extras.

With two field sessions occurring simultaneously, I again chose to watch Andrew Johns working with the spine. There was one extra player this week with Joey Lussick taking the number of dummy halves in the group to three.

Position specific skills are developed during this time, and this was exemplified today in their kicking. Different players were executing kicks that were relevant to the part of the field that they were playing from as well as the role that they play. 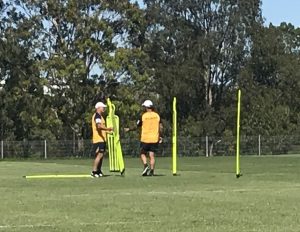 Joey and BA in discussion before today’s session.

Critical to Joey’s coaching is being heads up in footy – playing what’s in front of them and communicating decisively to team mates. The range of options at their disposal becomes part of the deception for defences to deal with.

It’s an education to watch.

When Joey finished his coaching, the spine joined the rest of the squad as they were wrapping up their field session.

Today, I was able to catch them working through attacking sets from line dropouts. To my eye, the work remained about players knowing their role in basic plays leading up to an attacking kick.

As always, the session concluded with approximately 15 minutes of extras.

Thanks 60s…
A quick one. Has Hollis bulked up weight and muscle wise? He is listed at 105kgs which seems light for a guy so tal.

I’d be surprised if he is only that weight. I’d estimate 110kg minimum.

A great post sixties, the amount of small detail you put in makes for confident reading, will be another step when the rest of the team resumes, looking forward to those reports and seeing the reactions/ interaction of them with the new players.

Cheers Colin. It will be interesting given two of the most vocal trainers are Gutho and Moses.

Another great read. And awesome to hear Oregon Kaufusi putting in a big one. I think he needs to bulk up a little, he slimed down a lot last season and I don’t think it was for the best. Just my opinion, BA might disagree with that.

Watching him last year from behind the goalposts I think he is taller than he looks and very well muscled. There does not look like an ounce of fat on him.

Michael and John, I think Oregon was closer to the build they wanted from him in 2020. I believe they considered that he was a bit too big in 2019.

I think I recall having discussed this issue with you earlier this year 60’s. Anyway as we are aware the proof is in the puddin’. Some players actually carry the extra 4 or 5kg well and it assists in the breaking of the line. Perhaps this may be the case with Oggy? I do not recall him breaking the line or many tackles in 2020 by comparison to what he had done in 2019.

At this stage, he seems to be in terrific condition.

Thanks for the pre season updates Sixties, have you noticed Opicic in training, just wondering how he looks as he could be our starting centre with Meanings out.

His fitness is good and I’ve given him a bit of a mention in today’s report.