Here at The Cumberland Throw, we’re passionate about pathways rugby league. We attend matches, live blog and report on featured games as we endeavour to update fellow supporters about Parramatta’s programs and the young people making their way in Eels colours.

Unfortunately, it’s been a challenging year for elite junior players.

When COVID-19 first struck earlier this year, the junior representative competitions were shut down and the players involved in such programs lost a year of their football development.

Though there was good news via local footy rebooting, there’s no doubt that the disruptions to elite pathways will have an effect.

However, those of us who are invested in the Eels systems can put our disappointment aside when we tune into today’s final of the NRL Schoolboy Cup. 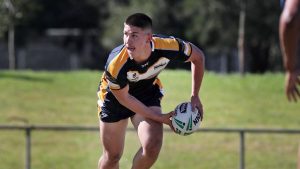 Vlado Jankovic in action for Westfield

What a terrific result it is for Parramatta to have a dozen players across both Patrician Brothers Blacktown and Westfield Sports High teams.

Of course, other NRL clubs are represented with players attached to their programs, but with two western Sydney schools involved, the Eels were bound to feature most prominently.

For those tuning in to the live stream, here’s the players to look for (pending late changes and with apologies for any player not mentioned).

Jot down these names in your Blue and Gold notebook for 2021 and beyond. 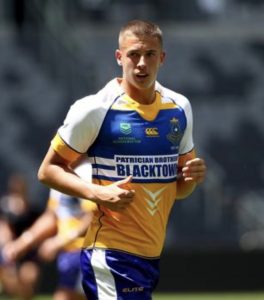 Blacktown half and captain, Jakob Arthur

Competitions are set to resume next year, so you can track their progress as they resume their footy development wearing Eels colours once again. You might even see the likes of older players such as Arthur, Russell, and Loizou involved in some preseason training!

And so to today.

The Schoolboy Cup hasn’t been held under ideal circumstances for the players and their families and their friends.

Spectators have not been permitted to attend matches, with venues closed to the public. Access has only been available via live streams through The Daily Telegraph.

But what a collection of highlights there’s been as the teams have marched towards today’s final. We could use the cliche “champagne rugby league”, even though most of the players are too young to imbibe.

When the dust settles, there will only be one winner, but today remains a day of celebrations for all players.

They should be proud to reach the final of a prestigious competition in such a year.

The team lists, courtesy of the Daily Telegraph are:

Good article mate, and hope the boys all do well. I wonder if the players have to attend school in the morning (Yr 11 players), as I remember the commonwealth bank cup years ago and often thinking these boys attend school in the morning (as I did when we played). Or do the schools now allow them time off to prepare. Shame I cannot watch it.Is anyone able to list a teamlist for each? for positions etc

Thanks mate, I watched Myles Martin in Daley or Johns Cup with Parra a little over a year ago at Wyong; I am sure he is a country kid from out past the Mountains; had a real go.

He is, though that was his older brother in 11.

Good game Sixties; I managed to see most of second half. It would have been tough playing in the warm day. Do we know which players in total are in our system for Flegg / Ball? as in ages.

You mean a break down? Jeez mate! It’s a mix of everything from Flegg down to development squad

Pete, Mataele played SG Ball this year and was decent! Then of all clubs the Knights came in and made him an offer that was more in line with someone who was playing reggies . Strangely enough, he did this previously by leaving for a year to take some coin to play a season at Manly, then came back.