As with many young debutants, few punters have had the opportunity to watch him live, and only some of his journey has been told.

TCT has covered his past footballing exploits and that of his brother Filia. Recent media attention, including a fine article by Adrian Proszenko, has revealed more of his story – his injury setbacks, the motivation to achieve provided by Filia’s injury playing 18’s Origin, and the dramas surrounding his future contract with the Tigers.

However, another significant part of his journey is the role played by the Parramatta Eels Elite Pathways Programs.

How important are these programs?

Back in 2018, Stefano was part of the Senior JETS.

JETS is the acronym for Junior Elite Talent Squad. Staying true to the mantra of “Development Club”, players from the Parramatta pathways are brought together for specialised mentoring and coaching, with the ultimate goal of producing home-grown NRL players.

Co-ordinated by Joey Grima, current Elite Pathways Coaching Director, Stefano and his peers would rock up to Eels training HQ at 5am, two days per week, and receive training and advice from NRL staff.

Such an early start had its challenges and demands, especially for young blokes who had school or work afterward. You’d even see some parents, like Stefano’s mother Esther, wait in their cars till the squad finished their work to transport them to school.

Yet despite the demands, that group of JETS players excelled and those early morning sessions prepared them for the rigours of their first NRL preseason. In fact, they were more than prepared, as a number of them took the challenge to push Gutho in conditioning runs.

And the rewards for the club have started to come to fruition. In Stefano’s group were recent Eels debutants such as Dylan Brown, Oregon Kaufusi, and Ethan Parry. The others in that group included full time squad members Haze Dunster and Kyle Schneider. Steve Dresler was another alumni destined for the top grade until injury prematurely ended his career. He’s now kicking terrific goals via his Whatability organisation. 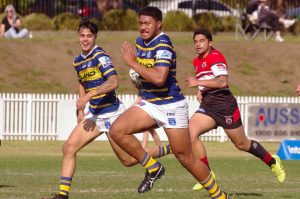 There have been other participants worth noting. Followers of my pre-season training reports would be familiar with young powerhouse forwards Sam Hughes and Dave Hollis. Both young players took part in the Junior JETS, the program targeting 14-16 year olds. I’m expecting those boys to make their debuts within the next two years.

On the topic of younger players, the anticipation is just as strong about the next emerging group of JETS participants. Sean Russell, Samuel Loizou, Jake Arthur, William Penisini and Jontay Bentham-Misa are all expected to make their mark in the coming years, emphasising the importance of providing quality development programs.

Of course, the JETS program does far more than just provide football coaching. Last year, I was privileged to sit in on an education session with a group of junior JETS players and their parents.

It was a cold, midweek winter night at Old Saleyards Reserve and the group had come together as part of the well-being component of the program. On other nights, topics such as nutrition, media and social media were also covered.

The JETS program provides the platform for players, parents and the club to work in a partnership that ensures that education, and physical and mental health remain priorities. That evening, I listened as the message about having plans outside of football were emphasised and repeated. It’s a consistent message throughout the Eels organisation, with all members of the NRL squad engaged in some form of further education or vocational training for a career after footy.

I’ve been fortunate to be able to witness such aspects of the Eels programs in action.

Along with other associates of TCT, I’ve long taken an interest in Eels pathways. Watching squad trials, matches, and training has helped us to develop an appreciation of the work that goes on behind the scene. Along the way, we’ve met and come to know staff, including volunteers, who make our great Eels club tick. For many, it’s more than a job, it’s a passion. Big D, Denis Anderson, exemplified that.

Back in 2014, Brad Arthur, a former Eels junior, was appointed as the Eels NRL coach. Not long after his tenure began, I learned about his desire to take the junior programs to the next level. His regular attendance at Junior Rep matches was part of the evidence of his investment. Arthur was instrumental in the return of Joey Grima, an equally passionate Eels man with nearly three decades of history at the club. It was probably serendipitous that Eels junior recruitment and retention manager, Anthony Field, would be working alongside both men.

So when a bloke like Stefano Utoikamanu becomes player 807 this week, I’ll tip my hat to the young man’s hard work and to the sacrifices of his mum.

I’ll be grateful to the unheralded staff and volunteers who’ve been a part of his journey.

I’ll acknowledge the astute judgement of Anthony Field, and the dedication of the man who drives the pathways, Joey Grima.

And I’ll thank the Lord that we have a true Parramatta man like Brad Arthur who, along with his fine NRL staff, has made this revitalised pathway to top grade a reality.

Parramatta doesn’t always get things right, and I’ve been critical when it’s been warranted. We sometimes lose players that I believe that we shouldn’t.

But we are heading in the right direction, and Parramatta’s Pathways Programs like JETS ensure that home grown talent continues to debut in the Blue and Gold.

Hello to bad he is going to the tigers . What happend to his brother fillia ?

Filia got a real bad head/neck injury which ruined one of the 2 main arteries to the brain. No way under duty of care he could play again as one serious knock would have been dangerous. I believe the club even looked at insurance cover, but no one would take the risk.

Was equally as good as Stefano, the outcome is history as they say .

Filia had leadership qualities. Heart breaking that he had that injury.

It keeps getting reported that it happened in a lower grade game, but it actually happened playing for NSW U20s in Origin

Correct though it was 18s Origin.
Will add that to the post.

What a great read..Your love of the Club is inspirational. Thank you for sharing the ‘passion’ It gives me goosebumps

I am really happy that Stefano is getting a chance tomorrow. It again demonstrates the professionalism in our club. After reading the story about him and his family today I can understand why he left for opportunity and financial security. He and his family understand that one tackle can change the future. When you have our forward pack as well as players like Oregon and Marata you can’t play big overs for a young player. I wish him nothing but the best and as he is leaving the right way it always leaves open the opportunity for a return. I… Read more »

Marata was a great example of being handled correctly. We thought he was ready in his first year. He was slaying it in training. He won the Wenty player of the year after starring in NSW Cup. But after he debuted, he said he was glad it took so long because he wasn’t ready. He volunteered that. And his minutes were minimal at that stage. But after being built up in responsibilities, he’s an important member of the first grade team.

The rev aka Snedden
Reply to  Shelley

Hi Shelley I like the Jets system if it continues to work the way it is we will only get stronger than ever before to push our clame to premiership glory.

Brian Smith had a very good system going that it was that good that we couldn’t blood them all n some left looking for a opportunity to play 1st grade player’s like Willie Tonga , Pat Richards. Can’t keep them all as they say.

Rev, I think Smith was a good coach, with some terrific pathways ideas, but not so great with retention and recruitment. The years 2002 – 2004 should have been our best after 2001, but they were the opposite. Also, think about how many different fullbacks, hookers, and halves we used. They were key positions but we were always releasing them.

1. Is Jai field a family member of Anthony field ?
2. Any News on wear Ethan Parry has gone still can’t believe his gone.
3. Will Ferguson finally Cross the try line this weekend
4. Do you think Stefano will Play Long minutes.
5. Have you heard anything about CHN being chased by Canberra, west tiger’s n Eels

Sixties I’m sure I read a column from the smellygraph or smh that he Stefano is leaving because his parents didn’t like the way the club handled the Fili case after getting hurt n blamed the club for his injury.

parrathruandthru
Reply to  The rev aka Snedden

Exactly. That rumour has been around for a while. Filia wasn’t injured playing for the Eels, he was playing 18s Origin. Also, if you read the quotes in Proshenk’s piece on Stefano, you’d understand the seriousness of the injury and why he couldn’t play again.

I am looking forward to seeing Stefano make his debut today. We have been reading a lot about him in recent times.

I am sure that he will acquit himself well. This also means that he is in line for a chance of experiencing his first GF before departing for the Tigers.

Do you think NRL will hook Stefano for covid breach?

Good news that they didn’t!