Like any supporter, I always hope for a win and cannot accept defeat easily. Accordingly it was wonderful to watch from the stands as my Eels team took it to a premiership heavyweight like the Roosters and competed with self-belief, skill and desire. It also hurt to lose.

The loss against the Tri-Colours could be good for us if, make that ONLY IF, we learn the lessons from it. And here’s the biggest lesson – it’s essential for players to own their mistakes, especially those that relate to their role.

The thing I enjoyed most in the first two games (apart from the wins, obviously) was the way each player knew their role in the team. They did not step outside that role. That was the positive.

Last Friday, there were negatives that need to be acknowledged. I’m not talking about mistakes, because mistakes will always happen in any game of football.

What has to be addressed is when players don’t stick to their role. And to be clear, that doesn’t mean that we want a team of robots. But roles and responsibilities, especially in defence, are important. No team can afford lazy defenders, or those that don’t stick to the system, at crucial moments in the game.

Likewise, we cannot accept brain explosions in possession. The first two wins were achieved on the back of composure and team work. In such a young Eels team, it’s the role of senior players to demonstrate composure. That was not always the case last Friday night.

The loss is now consigned to the past, and hopefully the learning has been achieved.

Looking ahead, this Saturday against the Sharks is the perfect game for us.

Just like the Roosters, the Sharks will not beat themselves and will prepared to win ugly in 80th minute. If the Eels have learnt from their last game, then we should see them prepared and willing to do the same. 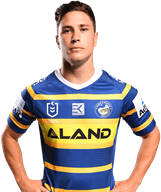 The two teams match up well. Junior can cause as much havoc as Fifita does. For the Eels, Moses, Brown and Gutherson have as much, if not more creativity and skill as playmakers. Both sides have big outside backs who can finish opportunities. And when it comes to missing players, I would argue that Wade Graham’s absence evens out the Eels being without Nathan Brown.

This game will be won by the team that has better field position and possession, along with that important word – composure. The Sharks defence will not crack easily, so we will need to be patient.

Make no mistake, if the Eels make the same mistakes as last week they will not win. If they fix them I expect an Eels win.

From the stands I therefore see this as the perfect game to follow on from the Roosters – a chance to see if our team has learnt from their mistakes.

Can we win this Saturday?

Absolutely and I expect us to. I acknowledge we always find it hard to beat the Sharks, but we are told – and I believe – this is a different Eels team. Last week showed that difference, but we need to be better.

To win we need players to own their mistakes from our last game and step back inside our system and play their role.

From the stands, I have believe that this Eels team has the potential to be spoken of as a quality team, but that next step must be taken on Saturday night.

Let’s look forward to a large and loud crowd at ANZ Stadium for our last ‘home’ game at that venue before our return to our spiritual home.

Enjoyed the read and I agree with your sentiments Shelley. The chooks game was an eye opener on many levels, our attack was great but our defence and errors , well… not so good. Composure as you say is the key, as is changing the games tempo at crucial times. I believe we have the basis of a very good team at the moment. I think that the speed and physicality of the roosters clash, surprised some of our players. Good learning curve tho. We just need to learn when and where to slow or speed the tempo up. All… Read more »

Your tempo observation is good Jonno. We need to dictate the tempo, not have it dictated to us. Unfortunately our errors took that opportunity away. I think that the crucial error by Fergo from the kick off set the Roosters up for victory and after they took their opportunity with both hands, we couldn’t halt their momentum.

Yes agree with your summation mate. It is a growth year, many things to learn, strengths and weaknesses of our team included. Hoping for a good show against the sharks, they have been in the past a “bogey” team for us, but we are in 2019 a different team. Cheers

You are so correct. So many times last week I was saying just take the tackle- settle down. At times they played like they wanted to score from every run. I think the late injury to Tepai hurt us, as we had a lack of really mobile forwards on the bench and this hurt us in the last 15 minutes.

Good read Shelley. Like you also think this game will shut the na Sayers up it’s a game that will prove we are a much better unit then (we’ll last year). I think we match up well. There forward pack and our forward pack are quite the same. I think our backs baring miko sivo have got the Sharks covered for experience. Gutherson vs Dugan. This match is even. Ferguson vs feki. Ferguson should have to much class for feki. Takarangi vs j.Morris. skills vs speed. Jennings vs Xerri. Jennings experience vs youthful rookie. Sivo vs Kota both = inexperienced… Read more »

shelley
Reply to  The rev aka Snedden

It will be a very interesting game. To tell the truth I can not remember the last time, even 2017, that I went into a Sharks game confident. I am this time. I respect the Sharks, they will not beat themselves. But if we learn from last week I really think we should win. It is pleasing to think that about my team once more.

Well done Shelley. I believe we are a mix between the 2016 team under pressure rising to overcome adversity and the 2017 team that surprised a lot of people in how far we were able to go in the season proper. We have a team who have shocked the pundits during the first three rounds with our attack and our competitive spirit. We are also clearly performing well considering the number of injuries to key personnel in these early days having lost Manu and Nathan Brown for the first half dozen games and also having played without Junior Paulo, Peni,… Read more »