The good thing about getting walloped in NRL Premiership matches is that you can front the next week and redeem yourself.

The problem with finishing a season with the wooden spoon is that the next step in redemption is almost six months away.

Eels fans don’t need reminding about the abomination of 2018. The supporters from the Riff have no issues with jogging the memory whenever they see someone wearing the Blue and Gold. It’s that sort of relationship between Parra and their younger brother from out west.

But footy battles are won on the field, not up in the stands, and the Eels fired the first salvo of 2019 with a convincing 20 to nil trial victory just two short weeks ago.

Basing Premiership tipping on trial results is as clever as sharing your home movies with a few “mates”, but there was plenty to like about the Eels attitude, particularly in defence.

The Eels go into this clash without three key forwards – Paulo, Terepo and Ma’u. That leaves significant impact players sitting on the sidelines.

Over the past month, the Panthers have created more drama than a season of MAFS. Such controversy could either derail a team’s campaign or galvanise the players against the big, bad world.

Episode One is about to air on Sunday arvo. I can’t wait.

First round punting is fraught with danger, so punters beware. With no form line to guide the betting dollar, it’s a genuine roll of the dice.

So I’m going to consider the weather and take a chance that the Eels will start well. With that in mind, the bet will be in the first half line/over under double market – take Parra getting 3.5 points start, with less than 20.5 points scored @ 2.90 with NSW TAB. The first try favourites are listed below:

The Eels will field three former Panthers in Jennings, Smith and Sivo. The Panthers’ Tyrell Fuimaono played lower grades with the Eels before joining the Rabbitohs.

Former Sea Eagle, Shaun Lane, is an astute addition to the Eels line up. 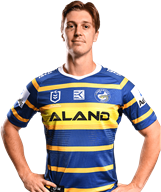 The tall back rower enjoyed the best season of his NRL career in 2018 after less than stellar stints with the Bulldogs and the Warriors. Lane proved to be one of the Silvertails most potent attacking weapons last year, crossing the stripe on 9 occasions and making 24 NRL appearances.

With one of the best offloads in the game, Lane provides a skill set which will aid the Eels capacity to produce more second phase football.

It’s early days in his Eels career, and undoubtedly Lane’s team mates are still learning to read his play. It will be interesting to track how that develops during the season.

In the corresponding match last season, a phenomenal solo effort from Waqa Blake late in the first half turned the game on its head and in retrospect signalled the horrors that lay ahead for the Eels.

The Panthers flyer is one of the gun attacking centres in the NRL. At 190cm and around 100kg, he poses a threat with his carries and his capacity to out leap his opponents.

Although he graduated to the Panthers senior ranks via the NYC, Blake is actually a product of the West Australian S G Ball team. At 24 years of age, the Fijian international is ready to deliver his best football in a team tipped by a few pundits to win the premiership.

Limiting his opportunities to get outside his man and use the combination of his pace and fend must be a priority for the Eels. They won’t want the spectre of 2018 to appear once again.

James Maloney is a winner.

From his NSW Cup Premiership with Wenty, to the titles he’s won with the Roosters and Cronulla, he’s added significant value to every team he’s played in.

The reason is simple. He never wavers in his self belief.

If he makes a mistake, and there are plenty in his game, he just gets on with business and changes nothing in the way he’s playing. This is the hallmark of a quality player.

The jury might still be out on his combination with Cleary, after all they can both be dominant halves. What we do know is that he’ll count the defence, pick opportunities, and go for it. The Eels will want to limit his effectiveness by sending heavy traffic his way and busting him up physically. Read as ditto for Cleary.

Dylan Brown makes his much anticipated NRL debut against a wily opponent who won’t stop getting in his ear. But the young Kiwi is not your typical 18 year old. 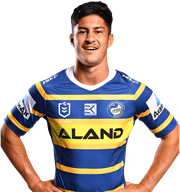 A graduate of the Eels Junior Rep program after moving across the ditch, the talented half was always going to be in the top grade at a young age.

Brown was elevated to NYC soon after turning 17, and his progress was so rapid that he only made a handful of ISP appearances before joining the full-time squad.

At this stage of his development, lining up against an old fox like Maloney will be a tremendous learning experience. Confident and composed, Brown won’t be overawed by the occasion. And that’s exactly what his team will need.

And The Winner Is?

If this was a full strength Eels forward pack, I’d confidently predict an Eels victory. However, there’s a huge hole in the middle without Junior, Peni and Munz.

On the other side of the coin, the Eels capacity to roll up the field on the back of two big wingers is a huge improvement on last year. Sivo and Ferguson will get sets off to big starts with their carries.

Ferguson is a great communicator and will also assist the Eels defence.

The Panthers deliberately didn’t fire a shot during their trial. There’s no hiding the talent in the Panthers line up and the confidence exuded by their fans is understandable.

In wet conditions, this is likely to be a six points or less game, with the team keeping mistakes to a minimum and executing their kicking game probably earning the spoils.

I’ll open this season by tipping the Eels to win.

Man of the Match – Mitch Moses

Sixties, a neatly formed and compact post, I get the feeling that your words that the game is fraught with danger places a cautionary view on the game, & with the loss of 3 key forwards that danger sign is well and truly alight. Even being down in numbers in the pack, what we see in the selection is a pack that is roughly as strong as last year, my one concern though is Evans off the bench rather than Kafusi. Evans if he runs on needs a big game and being a big unit should use it to the… Read more »

The forwards performed without Junior in the trial but both Manu and Peni created an impression in that game. I think the other forwards really need to find another level in this clash. I’m still keen on a win, but it will much tougher than if we were at full strength.

Gee I’m nervous about this one.
All we want at the end of the day this year is our beloved Eels is having a fair dinkum dig, more composed style of play and a never give up attitude.
Go hard boys!

Great to have the footy back. I see this game similar to the Storm/Broncos on Thursday, us being the Broncos. Just do not have that polish and mongrel required to win NRL matches.
The two Friday night games were polished performances, even by the losing teams. The shinning light is Panthers are no Storm.

10 Year, without three key forwards, any team would lack some mongrel. Unquestionably Paulo and Ma’u have that in their game. I would have picked Eels by 10 with them. It’s a much tighter contest now, especially in the wet and away from home.

Great positivity Grunta. Lane will add to the team this year. Will the conditions suit his play today?

I’m worried that our pack has beefed up but the refs aren’t blowing the whistle this year. In a hard, wet match, a slow boggy affair might be our saving grace.

We all know that the penalties won’t come our way like they did in the trial. Expect Maloney to push the limits today.

Had the same thought TE. The games so far have been decided by fitness,mobility AND size. It’s almost like wait for the 65 minute mark and easy to pick the side going better.. Actual playing time has increased by 15/20%. So a slow ground might help, but also our roster is younger than 2018. More legs? Yes, just has to be more than Penrith.

Unfortunately the injury gods have already cursed us. Already we are hard hit with three forwards (Paulo, Ma’u and Stefano) out without a shot being fired and Peni suspended. What have we done to incur such wrath?

Still happy with the forwards and think they will hold their own as panthers loose a lot without Kikou (not sure of the spelling). My only concern is Moses with his dumb passes and to me lack of control and does not show me as to be a dominant half. Hope I am wrong but I think we will struggle unless Brown has a blinder and controls the team. That is Dylan Brown. Hoping for a win but not confident.

How did you rate our halves against the Origin halves today?

Wet weather = game for the forwards. With parra missing 3 key players I reckon panthers are gonna kill us up the middle. Panthers 24 parra 6

How would you rate the job that the forwards performed today, even after losing Brown? I had faith but they exceeded my expectations.

How good was it Offside?

Great start to the season…..showed energy, commitment and backed themselves. Also played with a lot of energy. The new players were excellent, and the Dylan Brown with a couple of try assists….and super calm on the field……a great debut

Greg I listened to the game on 2GB and they gave MOM to Moses. it sounded to me like a game won on the back of patience and commitment.

I thought they would. His kicking wasn’tt the best but that defence! What about the try saving double! Ultra committed

Greg, he’s a special talent. No secret to those of us who’ve watched him over the years, but what a debut!

What a sublime effort! They never stopped putting in, heads never went down when they made mistakes, they backed each other up all game both with offloads and support for players who made errors.

Have Parramatta finally rediscovered their steel? I bloody hope so. We were sensational. I’m so ecstatic!

I’ll pull my own head in and say it’s just one game. But after last year we needed to make an opening round statement.

Mate, I’m just stoked that we won! And they competed so hard! It was an amazing effort more than an amazing execution.

Nostra”sixties”damas. Your 20-14 was bloody close and Mitch had a strong one. You’re good.

Yeah, not too bad was it. What about my betting tip getting home too!

However the media Experts had it about 18 – 2 Penrith. The only thing that made me nervous about the expert tips was that Steve Mortimer was one of the 2 picking the Eels.

I honestly believe that we had the capacity to put a big score on them at full strength. So I went with that 6 point margin with us being down three forwards.