The Rugby League community loves its buzz words and in this fan’s view, there doesn’t seem to be a word that’s bandied around as much as “culture” when it comes to talking about the feel or attitude at a club. As the Blue and Gold bask in the glory of five wins on the trot, the newspapers talking up a top four finish, and the return on The Eels to finals footy, I thought I’d turn my magnifying glass (or indeed my prescription glasses!) upon the topic of club culture.

First of all – what exactly is a “club culture”?

A common definition of “Club Culture” is – “the practice of protecting the reputation of one’s workforce in the face of criticism, above all other considerations” .

The manner in which the Parramatta Eels playing group bunkered down together during season 2016, the way they performed on the field, certainly personified that definition.

But I think there’s more to it than just that. Culture has to be grown at a club and be representative of those who live or work by it.

A “club culture” cannot be manufactured nor can it be imported from elsewhere. Why?

The conditions and circumstances are just not the same when you take an idea or ideal from another club and try to make it work elsewhere. Parramatta fans witnessed the results when we attempted to transplant or import a “culture” from another team – the Melbourne Storm. Stephen Kearney was from a “winning club culture” and had been a winning World Cup Coach. He tried to implement the style, the “culture”,  that had been successful at the Melbourne Storm. It just didn’t work.

Why didn’t the blueprint of a winning culture work when transplanted?

A common position by the Eels players during the Kearney years

The answer I believe, is simple.

True club culture can’t be transplanted, it has to come from an understanding of not just the players at hand, but an understanding of the area you work in or dare i say it, a love or a passion for that area. What works, and indeed what still works for Craig Bellamy and the Melbourne Storm, is a perfect fit for them.  Melbourne is a Rugby League island in a sea of AFL.  The players down there are isolated from the greater majority of the Rugby League community (and larger, wide spread fan base) that exists in New South Wales and in Queensland. The players become their own little community and the structures that Bellamy and the Storm staff put into play work there because it fits for the club and the environment.

Brad played his junior football in the Parramatta area. This is where he and his family grew up. The pride and passion they have in being a part of this area is on show even at a grass roots level.  This is evident not only with his involvement with junior league coaching in the Hills districts, but also at Junior Reps where you’ll see Brad (and also Bernie Gurr) watching the young stars go round.

Can you imagine the amazing impact that has on the young players, the coaches, the volunteers, and the families when they see the first grade coach in attendance. How good must they feel that the top grade coach takes the time to come and watch the future of his club?

Club culture is being planted at the junior levels.

Brad Arthur is about as honest and straight up as they come. He’s up front with his players, never sugar coating a communication to “ease a painful message”, nor wrapping his players in cotton wool. He’s straight forward, telling them the truth of where they are and what they need to do to become better players. 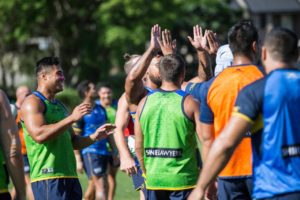 The bonds within this team are strong.

Look no further than our team last year, stripped of points, they could have easily just turned up and gone through the motions.  Most people wouldn’t have blamed them.

But not our Eels.

Not the culture that Brad and his staff have been developing.

We saw them put in week in, week out, never losing pride in the jumper, playing for one another.

Team joy as IDG scores a double vs The Warriors

A club culture cannot be imported.

It cannot be bought.

It cannot be manufactured.

It takes time and the right person with the right team to make it happen, and this is what we have with Brad Arthur and his staff.

We have a Parramatta Culture. And it’s something which will bring great pride to our club.

He certainly seems to have brought a change to our mental strength as a group. When they talked earlier in the year about believing themselves to be premiership contenders I thought they were putting on a brave face but they are starting to look the goods.

The boys really have been looking the goods lately.

I been out of action for a bit lately. I was in hospital with a mini stroke and was down and out for a bit, not been healthy enough to get to a game yet, but the great form has been more than helping out with recovery

look no further than last Friday’s match against the Broncos.

The Parra of a few years back had a habit of capitulating after an opposition got early points on them, but not the current Eels.

Mentally tougher, not giving up, fighting back .

B.A and his staff have been laying down the ground work for some time for the results we are seeing now. The right attitude with the right mix of players and it starts to flow to the entire squad.

Good times to be an Eel!