For those among us Parramatta fans old enough to remember the early 1980’s, we can recall a time not dissimilar to what we are about to enter into with Season 2017.

Our home ground being demolished and rebuilt is not exactly new territory to many Eels fans.
In the wake of the brilliant news of the announcement of the new, independent, highly experienced and skilled board at the club, I thought I’d take a moment to shift the focus for just a moment. 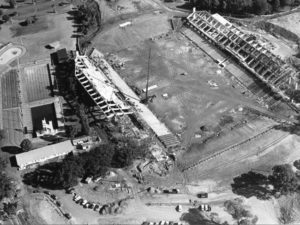 Cumberland Oval being rebuilt during the early 80’s

Membership and Why It’s Important to our Club

First of all, let me say that there’s nothing i could add on top of the amazing article that Clint gave us just recently as to exactly why the Eels ARE the most marketable sporting identity in  Western Sydney (please feel free to re-read this outstanding article to refresh your memories!).  As we launch towards the start of the 2017 season, with our membership count currently at 18,267, it’s important that we continue this great trend and see this translate to numbers at our home matches at ANZ Stadium.

There’s nothing that our players love more than a sea of blue and gold urging and lifting them on. I’ll point to Round 6, 2016 against the Canberra Raiders. Early in the second half, wave after wave, consecutive sets of six tackles, Canberra threw everything at the Parramatta defence. The fans rose as one to urge the defenders on and the line did not crack. The cheer that went up around the ground when Parramatta forced the final error from Canberra was incredible. But the effect it had on the players? Invaluable. Several of the players spoke about that day, they spoke about THAT moment when the fans stood and cheered after the players held their line. The players spoke about it how lifted them to another level. 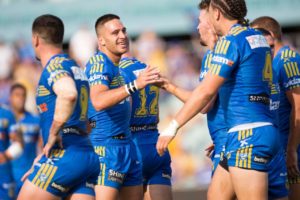 That’s the difference that membership and being at the game can make.

Whether you’re a ticketed member with your regular seat, whether you have an out of state membership, a flexi membership, swarm ticket, captain’s club, general admission or you’re a non ticketed member, buying game tickets when you can get to a game, it’s that sort of support and being there that lifts the players.

As we head to our first season away from our home at Parramatta, it’s probably more important than ever, to be right there behind the team in membership, that we turn ANZ stadium a sea of Blue and Gold .

What’s been encouraging as well has been an initiative from a variety of the dedicated supporters groups to unite and create a new supporters area, similar in set up to theone that South Sydney fans have established, “The Burrow”.

And it’s no small task!

The cross group team has been working tirelessly and has already held talks with the club and ANZ Stadium about getting a supporters area set aside , the large banner register and there’s even discussions as to what ANZ Stadium expects as a code of conduct from a supporters group.

So as we march towards Round 1, excited for what the season has to offer, no matter where you intend to watch the games, it’s important, now more than ever to rally behind our great team, lift our voices as one, let those membership numbers flow to numbers in attendance and lift our boys on the field. 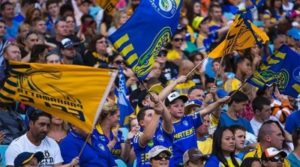 Images courtesy of The Parramatta Eels and The Daily Telegraph.

Agreed DK, let’s see an ocean and let us all drown in blue and gold glory….members and non need to get out there, and I only hope the parking and food costs are considered. As taking families should be some form of priority.
Nice warm article for a showering arvo mate….cheers

cheers mate 🙂 I remember a few of us chatting to the players after that Canberra match. They were so buzzed about how the crowd got behind them. It was amazing in the stands that day, the atmosphere was (no pun intended!) electric, but when you hear from the players just how much it lifted them on the field, it really impacts you on just how important it is, not just to be a member, but to raise our voice at the ground for the guys. Just inspiring stuff to hear! And also, I can’t wait to see what our… Read more »

Agreed, and I think the Parra version may have more of a bite (and teeth)…

are you allowed to write a fan story and not use the obligatory picture of Hamish to represent us?

So impressed & happy with the new board. And how well did Bernie handle that presser? Onwards & upwards Eel tragics!!

Bernie was all class in that press conference.

I noticed a few questions that may have been designed to get him to bite, but the guy is such a classy operator and a total professional .

Good read DK Eel and I couldn’t agree more! I try to attend most Eels games whether they be home and away as it does lift the players. I remember that Raiders game and it was so evident that the crowd did lift the team who went on to win impressively that day. The other time was a few years back in a game against Melbourne on a Monday night if I recall correctly and everything was against us but with the help of the crowd albeit a small crowd that night the roars and applause really got the boys… Read more »

Jason, I had the opportunity to talk with Manu at training in the week after that Raiders game. He said that the team were lifted by the standing ovation.

Membership is so vital DK. Supporters can not underestimate the value it has to the Club. The most important thing to consider with it, is the mindset towards membership. It is not purely about the pack of goodies that comes along with it, it’s about investing in the financial future of your Club. Over the course of a few years I was in a position where I received complimentary membership and still chose to purchase my season tickets. This is something I was under no obligation to do whatsoever, but I chose to because I believed in investing money and… Read more »

I hit post before writing my final sentence! Thanks for bringing this to the wider supporters attention DK!

cheers mate. Membership is such a vital part of our club’s success. We have such an opportunity to have the strongest membership in the NRL , the most marketable team in Western Sydney …. when I look at other “growth area clubs” that have a target of 12,000 members and they barely managed to hit 8,000, I can only wonder just how much of a league juggernaut Parramatta CAN be if we achieved our membership potential (we have good numbers so far, and I would like to think that with the new board, a new season and with some good… Read more »

I reckon we members should be known as “the Pond”. And opposition supporters known as “Pond Scum! “…….or is that too harsh?

On a different note. Lets let some myxomatosis and calicivirus virus loose in “the burrow”!

Well said DK. It is imperative we encourage all the lounge lizards to get back out to the games. I am particularly pleased to hear the comments relayed from the players who acknowledged the lift it gave them out on the field. On that Parra Melbourne game a few (quite a few perhaps) years back. I remember going to That game? maybe, but the one I recall was where J. Hayne and B. Slater threw everything at each it was a ripper of a contest and I think we won? I’m sure others will remember my recollections and the other… Read more »