Since returning from the World Cup, Will Penisini has enjoyed what I consider to be his most impressive pre-season.

He’s looked strong and assured in his training, and has consistently made the right decisions in both attack and defence during opposed work. Without question, he’s building towards a special season.

Today he was near unstoppable.

From time to time a player might own a session. Over the summer, Mitch Moses and Josh Hodgson have had such days. Given how often they handle the ball, it’s not unreasonable that they’d attract the focus of any observer.

Wednesday morning belonged to Will, something that isn’t easy for a player outside of the spine. 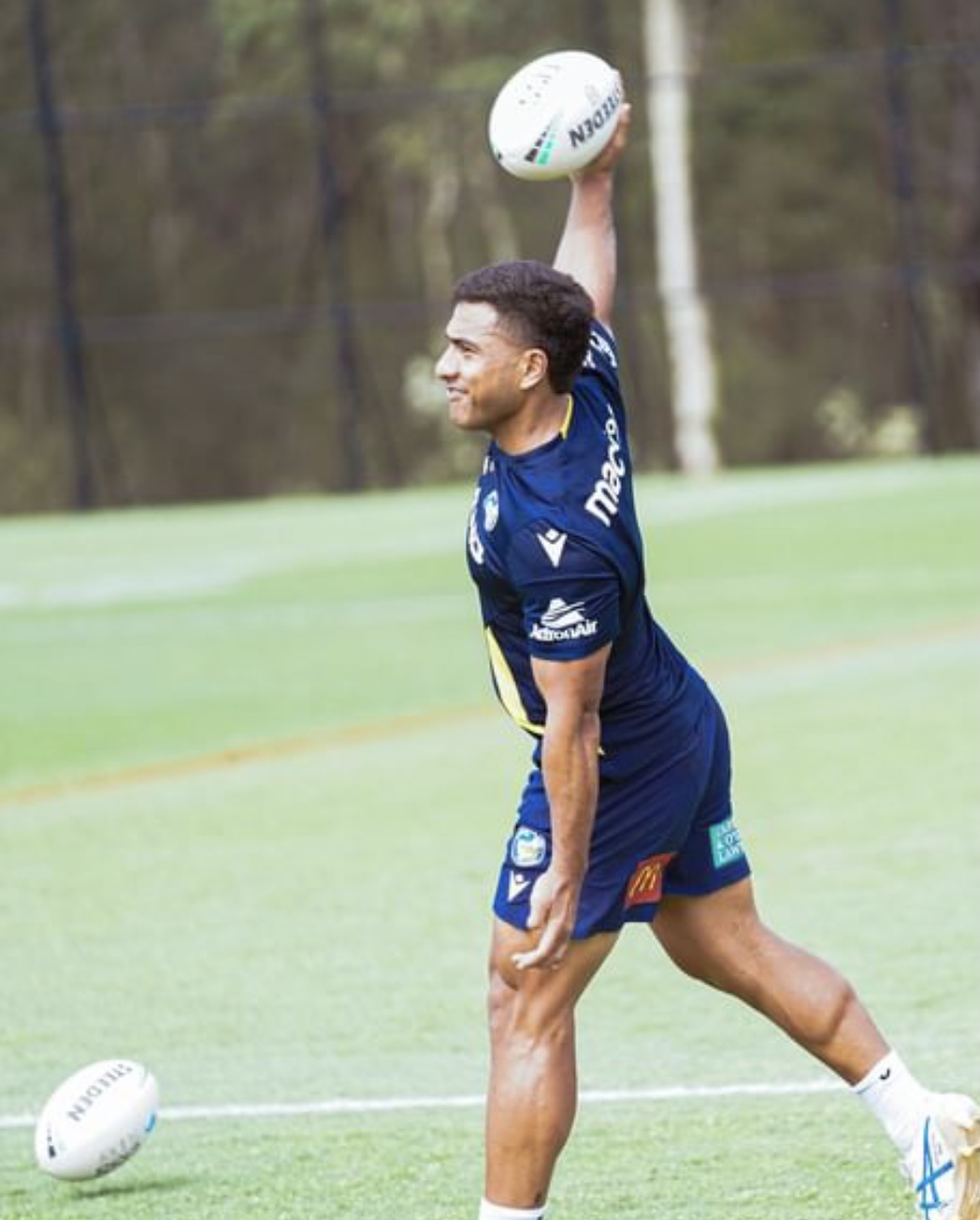 Literally every time the play came his way, there was a sense that something was going to happen. His confidence was palpable.

It was a particularly interesting session to observe.

A crew of Fox Sports camera operators, including a drone pilot, were filming the session for a club preseason feature. At times they were in the middle of the action.

Trent Elkin organised challenging conditioning sequences for the squad, and the warmer conditions added a further test for their fitness. 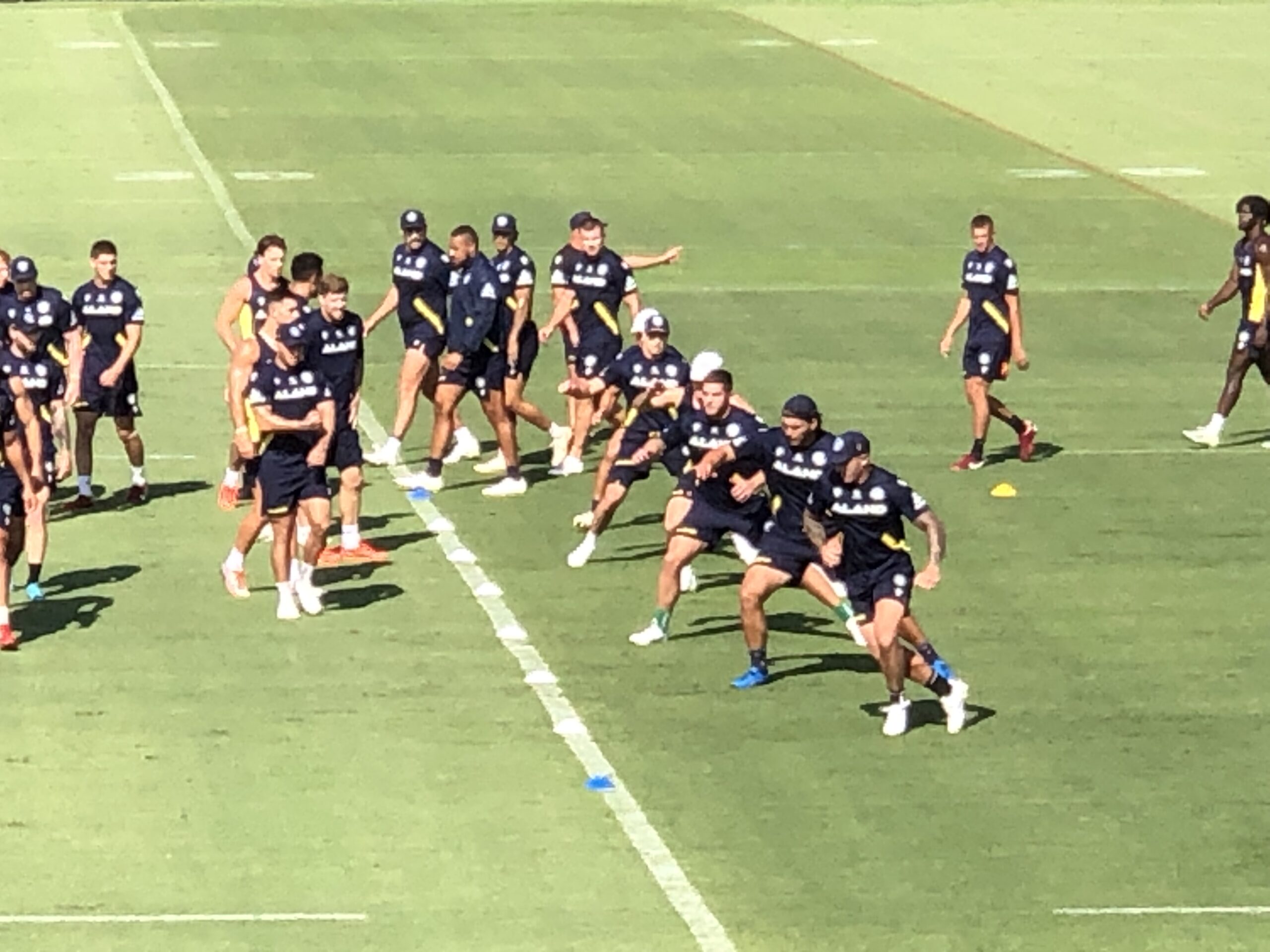 But would the cost of so many cameras be the loss of opposed work? I wondered whether the coaches would want it filmed. As the time ticked by, the only thing resembling opposed was some left vs right side drills undertaken separately by the NRL and NSW Cup team.

Then, as the squad launched into more more conditioning, half of the playing group donned red bibs. Hallelujah, there would be footy today!

* Jake Arthur made a partial line break from around his own quarter and managed a very quick play the ball. This allowed a clever ruck play and the team advanced the ball towards the other quarter. Jake’s play was straight from what he had been working on with Trent Barrett.

* Will Penisini received a ball on a wide right shift. His footwork and acceleration befuddled the defence, putting him into space. As the cover eventually converged inside the quarter, he kicked off the outside of his foot for Haze Dunster to score in the corner. It was dazzling footy to watch.

* J’maine Hopgood’s ball skills were again on display, and one particular offload in the collision launched a dangerous red zone attack. Unfortunately the play broke down a couple of passes later but the spaces were there to be exploited.

* Daejarn Asi, playing at 5/8 for the Cup team, delivered a perfectly weighted left footed kick for Lumelume to catch in full stride and score in the left corner

* Wiremu Greig, playing middle for the Cup team, instigated a productive second phase play with a terrific offload in contact

* Mitch Moses put the icing on the day’s cake by delivering a pass to send Junior into a hole. He then took the return inside pass for the try near the posts.

Though the coaches determined some of the field locations by calling for restarts that were not always the consequence of the previous play, this was a relatively free flowing period of opposed work. The attack was much more cohesive than the previous session.

The game faces were on, and Gutho’s call for the team to take full control as the opposed was about to commence were certainly heeded.

Love your work! Thank you

Is dunster back at full contact? Really hope he starts the season on that right wing

Not yet. And they won’t rush him. It was a very significant injury.

Great read sixties. Will looks a bit leaner from the photos posted this year, his maturity and professionalism is incredible for someone still eligible for Jersey Flegg. On Hopgood it was the game after we signed him I was able to watch him properly, Eels vs panthers at Parra stadium where he absolutely carved us up. Late offloads, short passes, big runs, hard hitting defence. Can’t wait to see him turn it up for firsts.

He will provide a point of difference Ham. Hopgood has I looked very good in every opposed session.

Great work once again! Did Russell fill into centres again or anyone else?

Yes, which is why Haze played in his wing spot.

Interesting. That suggests to me Simminson will be fit for rnd 1 on the wing.

Simonsson is yet to get involved in any opposed work.

I have said elsewhere that I believed Penisini would explode this year, & after your report 60s, I have further reason to believe. While Will doesn’t get the attention of his friend & former teammate, Sualli, I really think he has the potential to equal or surpass the Rooster. Thanks for the heartening report mate!

On the subject of Penisini, I also believe he is something special with his only shortcoming a lack of explosive pace.
At his age that can still come very easily, Brett Kenny being a prime example, when he first came into grade he had very similar attributes to Pensini and did not have that pace and acceleration that we became so accustomed to. I also remember Brad Fittler saying in his (will’s) debut year, he thought him to be a better player than Sualis (spell?)

Will might not be the fastest centre but I wouldn’t describe it as a lack of pace. He probably beats the first defender with footwork and power but his acceleration has looked good in the opposed sessions thus far this summer.

Actually when I first framed the comment it was going to be question of do you think he has got faster. I tried to put it in a positive frame and I think that is what you are saying,
I expect that he will continue to get faster for the next couple of years sixty, which will make him very, very elite.
He has a lot of Kenny about him, notwithstanding different builds, though I note he has trimmed as well.

Hi Poppa, , interesting comment on Kenny. I always thought he grew into 1st grade. Confidence, savvy,weight etc rather than his skill set, unlike the Guru who just arrived and smashed it because that’s what he did in U23’s. Penisini got promoted into an inconsistent, at times bog ordinary defensive line out wide, outpointed Justin Olam in his first game. When I look at the best centres at present many are strongly fast but not explosive, so yes if that was in Will’s skill set, look out.

Well put BDon, I am glad you saw it that way as well, sometimes when I am talking 40 years ago, I get worried about remembering it right. Totally agreed with you on current centres with the exception of the drug cheat “Xero” or whatever from Cronulla (going to dogs next year apparently), he had that explosive pace like Steve Rogers. God knows what he will have 4 years later?

I have seen few young players that ran as powerfully and as fast as Bronson Xerri. He tore the opposition apart in juniors and just transitioned with ease into the NRL. We now know why he was so physically superior.

Sean Russell has some of that Brett Kenny in the way he moves. Hopefully he gets an injury free run this year.

I like how each week you peel the onion further, revealing another player that is stepping up. Thanks for all you do.

Thanks Martin. TCT is a passion for all of us.

Matto (to some degree) and moreso Lane haven’t rated much of a mention in the pre-season …. Matto I think you said has bulked up even more, but In can’t remember much further. When you get a chance, would be good to hear how they are shaping up.

We’d all be hopeful Lane continues his 2022 form. There seems a lot of backrow talent across the NRL, but he was providing such a point of difference in attack I thought he was very unlucky not to be over in the UK in the green and gold.

Cheers Mick. It’s been a relatively short preseason for the top 30 with the majority of NRL players not returning until December and only getting a couple of weeks before the Christmas break. There wasn’t any serious full contact opposed until January, hence not much mention of Matto or Lane. Also I mostly report genuine stand out moments to keep it interesting, but that doesn’t mean that the individuals aren’t producing what the coaches want from them. From memory Lane featured in a try in an earlier report. That said, he wasn’t involved in this week’s work so far, hence… Read more »

The training reports really do whet the appetite for the season ahead. Which is just 36 days away!

Who is rotating with Rein in the Cup side?

Is it every year the cup side vs the nrl side?

I assume the cup side defense isn’t that good compared to the nrl team. Then is the attack you talk about that impressive? I thought a mixture of players in both teams would be more even

In the past the teams have also been mixed running left side NRL vs right side NRL. However, there are many combinations to get sorted in a very short preseason for most of the NRL players, so I assume that’s a factor right now. And as Parrathruandthru has said, the defence know the calls, know the plays and variations, know the idiosyncrasies of their opponents, and therefore have a defensive advantage. I’d also like to think that those of us who watch a lot of training, and see the players in this context and in matches, have a sense of… Read more »

Heard a nice story on Moses this morning on the radio he was at the cricket and spotted a young bloke and his dad in Parramatta jerseys he took them up to a corporate box all night and signed there jerseys brilliant. Plus the journo and I know its rothfield said he’s confident that Moses staying with an announcement within 2 weeks hope he’s right