Regular visitors to The Cumberland Throw would be well aware of the impression that Josh Hodgson has made at Eels training this preseason. From my perspective, his vision, leadership and play has been a revelation.

As ridiculous as it sounds to say, he had been close to flawless. I reckon I could count on one hand the number of errors he’s made during drills. It’s been easy to note because he launches into a quick set of push ups after a mistake. And I’m struggling to recall any opposed work stuff ups.

Today I learned that he is not infallible. Mind you he still impressed, just more low key than usual and that’s probably a good thing. This morning, Hodgo made a couple of uncharacteristic errors, much like the team.

As far as team selections are concerned, if I rocked up to Eels training expecting the answers, they were not to be found. In a mixed bag session, the good outweighed the ordinary, but sometimes having crinkles to iron out can be just what the coaches are looking for.

There were some passes that didn’t quite find the mark and the cohesion had scope for improvement. Nothing major, just the sort of stuff that provides a goal for the next session.

There were a few players not involved in this morning’s opposed work. Don’t read too much into this. Outside of some injuries that are well documented, preseason often features players doing alternate training – bikes, running etc. The reason could be anything from workload management and general soreness to a minor niggle.

Consequently, my notes below will feature some names of players having a session in the NRL team rather than the Cup team. Whether that is a pointer to a later selection remains to be seen. Today, I reckon it was a case of filling a hole.

It should also be noted that another consequence of absences was some players being completely out of position in the Cup team.

As usual the morning began with skills before the conditioning work kicked in. I’ll skip over this because the main course right now is the footy. 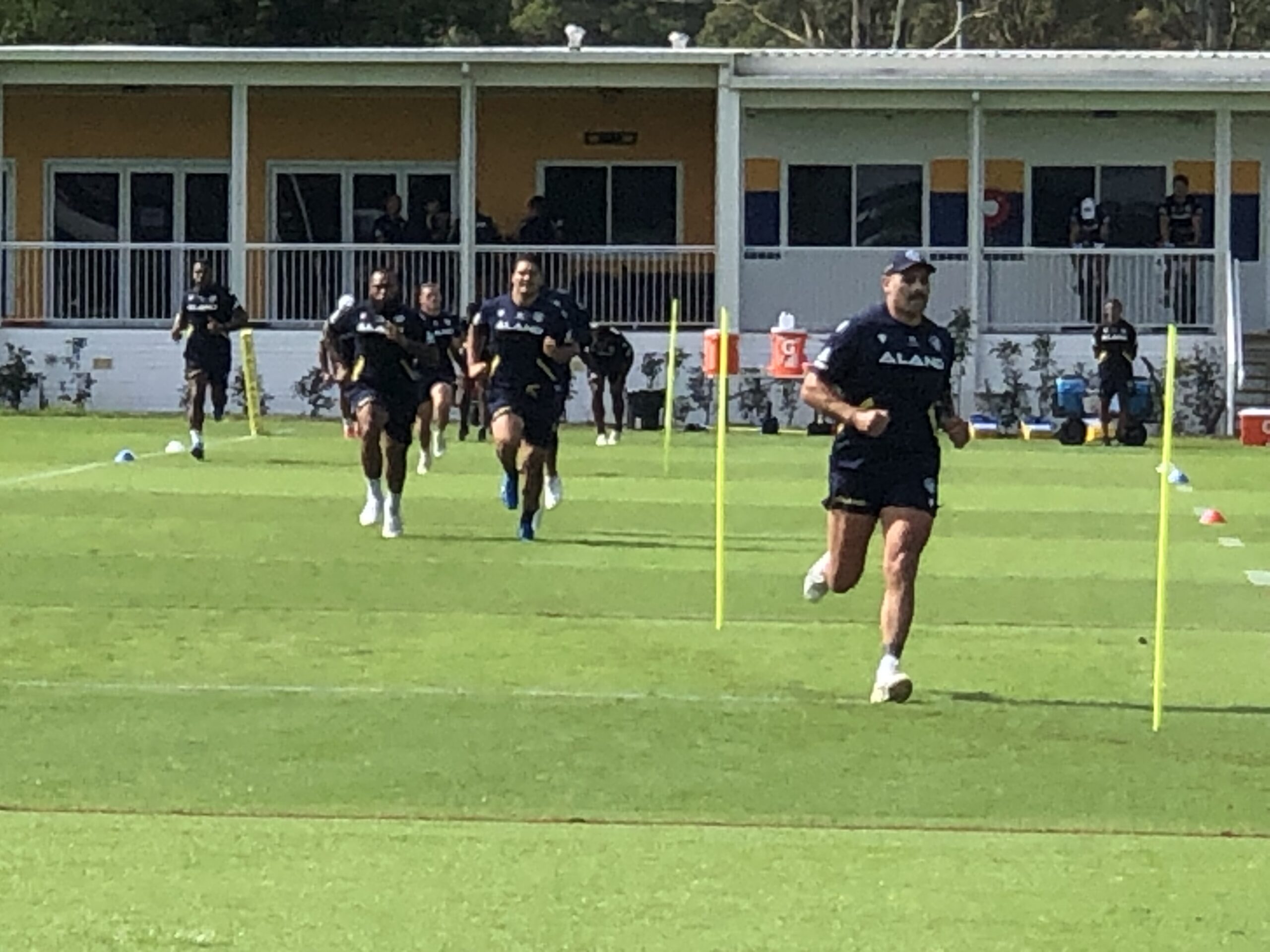 Here are my notes from the opposed:

NB – there was some alternating of possession via turn overs, but this opposed was mostly contrived with one team or the other being given sequences of restarts and hence prolonged periods of possession.

* A delightful short ball from Hodgson to Momoisea, with the former Knight crashing over 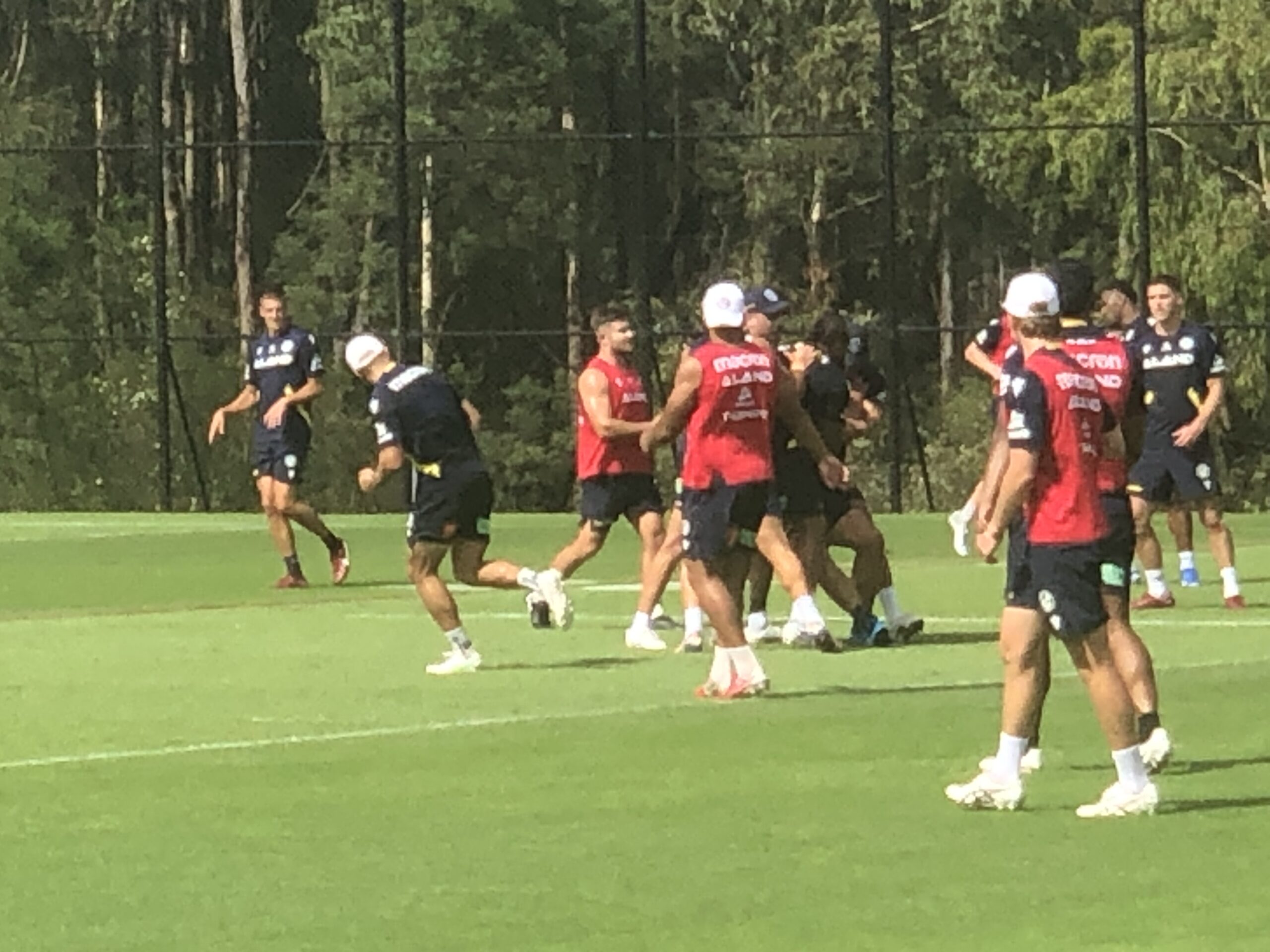 * A big collision on Mataele (playing for the NRL team) who had charged fearlessly back towards the ruck.

* Mitch Rein breaking the NRL defence with a dummy and dart before finding Daejarn Asi in support.

* A brilliant chase and covering tackle from Will Penisini on Asi after that line break. Unfortunately, Will’s effort was in vain as a quick shift to the left from the play the ball earned the try.

* A long range try to Moses. Will Penisini had put Dunster into space on the right wing and then Haze found Moses backing up in support.

On a positive note I came away encouraged by Haze’s progress. He’s not up to full contact as yet but he doesn’t look too far away from it. I also rated Toni Mataele’s showing on the right edge. I remain confident that he’ll debut at some time during the season (after he becomes eligible for selection).

Good man.
Matalele in a position we are in need of. An impact 2nd rower.

Also any info on trials?

Hey hindy111, how ya doing? 😀 So I think I got banned forever from LU but hey. I appreciate the support of you and my other mates and I’m doing fine. Annoying not to be able to chat with you guys there though. 🙁 Maybe I’ll join in future under a clever pseudonym.

Email me and we can swap whatsapp details
Jbturboman@gmail.com

Apologies 60s for derailing your much appreciated work here.

What was your name under LU? I’m still there but always come here for some more insightful news.

You know what they say, be careful what you wish for. 😁

I guess high performance is about reducing the the gap between the best and less than best performances. Thanks for the update.

Love the updates thanks 60’s

Thanks for the reports sixties. Who else is training at hooker? Would be nice to have some options if Hodgson were to get injured. Any updates on Brendan Hands?

Rein is the next in line as he is the only other experienced hooker in the top 30. Hands and Yates sit outside the top 30. Both have also trained in other positions as required in opposed sessions.

Thanks 60s, any chance Mataele will get promoted to the top 30, we still have 2 spots plus another if Brown goes.

Not sure Mick. Given its only a short period until he can be used I’d guess not. Plus he goes top 30 next year.

Yes I don’t see the point. He needs half a season in NSW CUP to get him ready. His defense needed work.

I know it’s off topic but how did the juniors go on the weekend?

Josh Hodgson looks leaner to me, I’ve heard reports he’s as much as 5kg lighter than his Canberra days. Any truth to this 60’s ?

Brett, I haven’t heard anything on that.