Last week was a step away from my usual format. I needed to vent so that’s exactly what I did.

It’s nice to return to normal programming this week after the Eels put the Dogs to the sword.

The return of Mitchell Moses provided Parramatta with the rudder needed to sail from stormy seas back into the calm waters. He gave the team direction and an attacking influence missed in the last start against the Bunnies.

There were some astute touches from both the Eels halves as they tore the Dogs apart. That grubber from Moses followed by Dylan Brown’s deft kick for the try was pure gold. What a highlight!

Supporters needed to see something closer to an 80 minute performance that put the foot on the throat of our opposition, and this result also gave Parra’s differential a healthy boost.

What pleased me most was the Eels sliding defence. A couple years ago Parramatta had the best defence in the competition with their compressed sliding defence. Maybe it has been covid affected over the last few years but seeing it click on Saturday gives some encouragement that the Eels can defend well in the upcoming finals series.

The performance wasn’t perfect. At times Parramatta were impatient and tried to score off every play. This brought about unforced errors and silly passes which meant that the team was probably guilty of leaving a few points out on the field.  Patience whilst playing their natural game will result in points.

The aforementioned impatience was reflected in a completion rate of just 68%. Parramatta played with 55% possession, and one wonders how many more points could have been mustered with better completions.

Time wise Parramatta had the ball for 43 and ¾ minutes with about 18 and a half minutes in the Dogs 20. 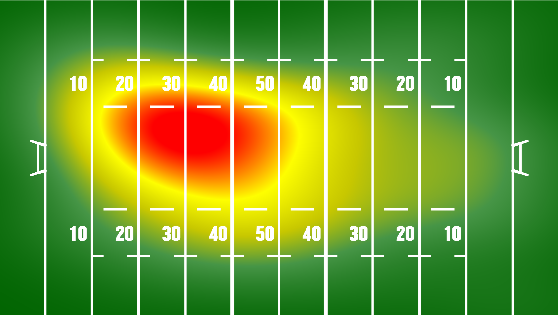 A lot of the Eels runs started in our own end. Ball movement was key as our attack and passing game was on fire. The forwards deserve praise for their tough yards digging into the Dogs territory to provide and build pressure. 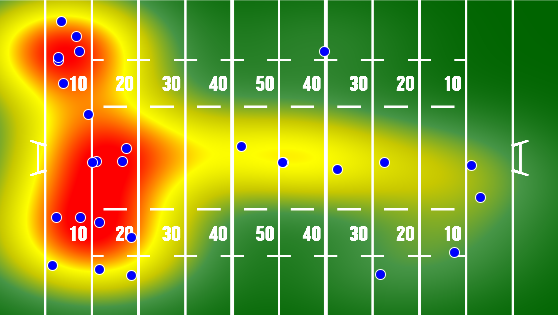 Plenty of decent set starts provided momentum and then the Eels capitalised on the pressure that was built.

This map was somewhat skewed due to the amount of Kick Offs received, but the Eels were still able to gain plenty of territory in the Bulldogs half.

Parra’s tackle count was the lowest I’ve seen for a long time. Only 280 tackles were made for the match. Across the NRL, the Sea Eagles register the lowest average number of tackles per game at 306.3 tackles. For Parra’s stat to come in so far under that is remarkable.

Tackle efficiency for this game was 86.2% compromising of 280 tackles made with 17 missed tackles and 28 ineffective tackles.

Reed Mahoney led with38 tackles followed by Ice with 28 tackles and Shaun Lane with 26 tackles.

Parra gave up 5 penalties and 2 ruck set restarts, whilst total errors came in at 13.

This weeks quirky stat was all about our captain Clint Gutherson.

Gutho’s averages 140.8 running metres per game. Somehow, in a dominant Eels performance, he only ran for 63 metres. Perhaps this says something about the ineffectiveness of the Bulldogs kicking game.

This week I am giving the coveted award to Tom Opacic.

It’s a shame he’s leaving the Eels at the end of season, as he is a quality first grade centre and those are a rare find.

Opacic is a truly professional centre, sound in both attack and defence. He may not be flashy or get all the attention like a Joey Manu, but he does hold his own and quietly goes about his role. His team mates and the coach know what they’ll get from him every week.

After a brutal result against Souths, it was good to see our Eels playing the style of footy everyone knows they can play. The top teams should be worried.

At this time of the season, it’s time for the fluctuating form to finish. With just 160 minutes left in the regular season, performing strongly from here on in is paramount.

The Broncos are hurting and should not be treated lightly especially after the spanking they received last week from the Storm. The Eels should be under no illusion that the Broncos will be easy to beat. Their memories need only rewind just a few weeks to Brisbane comprehensively outplaying Parra at CommBank Stadium.

Many would have thought that BA would stick with the side that beat the Bulldogs, but he has yet again changed a winning side and gone with what I would argue is a weakened bench.

Then again, the proof will likely be in the result pudding.

Great read Colmac. And no need to explain about last week’s venting as we all need to let off steam after one of those games. Very pleased for the W! We can really use it to build some confidence for our big tilt at the finals. Well done to BA for putting Marata to start. Matto always seems to play better of the bench. Marata allows our defence to get on the front foot. BA used the bench very well in this game. Possibly would like more time for Ogden. But we got the W so all is good. Well… Read more »

Colmac, never need to apologise for anything, you do an amazing job. Thank you.
I guess my issue has been the inconsistency and this goes back to last season. For me its the on field leaders, and our forwards should hardly ever not win the ruck….we have a v good pack on paper but i think we need an enforcer.
We should win this week and again the destiny is in our hands which is good, as its what these big players get paid for.