At what point do we stop reflecting on the holiday Monday massacre?

That question kept turning over in my mind after a number of false starts writing this column.

It’s been a hard loss to casually put in the rear view mirror. Why?

Forget that the defeat came against a bottom of the table team. That masks the problem. The Eels were going to turn up with the same attitude against most teams on Monday and the result could have been uglier.

Here are the facts, and they’re quite straight forward. 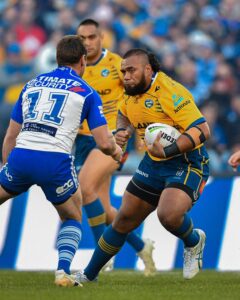 We didn’t trust the processes against the Dogs

1. The Eels have the strengths and the processes to secure the victories that literally no other contender can come close to – and it’s exemplified by beating or threatening both the Storm and the Panthers in every contest over the past two seasons.

2. The playing group has strayed from those processes, and those game plans, against most of the other teams.

Why they stray is more complex.

It’s been suggested to me that there is a lack of Intensity DNA in the team.

That could be a fair call.

In far too many of the matches this season there has been a distinct lack of intensity even in the wins. Last year, critics of BA’s methodology said that playing with the intensity he required ultimately led to late season fades.

I’ve never accepted that logic. I’d argue that the Panthers and the Storm have few problems in “bringing it on” virtually every week.

There can be no doubt that the team isn’t executing the game plan, and though messages are no doubt being sent from the sideline, very little changes.

Is this an effort problem, or an attitudinal issue? Perhaps it’s a reflection of the on-field leadership?

For mine it’s difficult to distinguish because the outcome is a vicious circle which inevitably means that the Eels have to exert more effort, not less, in trying to stop an opposition that’s on the front foot.

Whatever the root problem, the answer needs to be found because future consequences await.

Let me return to the two benchmark teams – Penrith and Melbourne.

In most weeks, they’ve won the contest before a ball is kicked in anger. Opposition teams know that they have to execute close to perfection to get the win. Some challengers may lift in attempting to prove themselves against these gold standard sides, but the psychological intimidation is evident as soon as the pressure is applied. 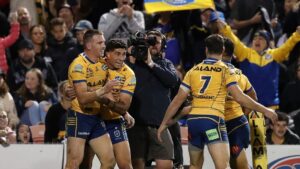 Winning the contest against the Panthers

Allowing every team to be in the contest, or to drop matches to cellar dwellers, doesn’t create any fear factor. Each club would rate their chances this year against Parra.

Bizarrely, Parra don’t seem to be intimidated by Melbourne or Penrith. Go figure!

From an Eels supporter perspective, there is greater uncertainty about what might unfold in any given week. The faith diminishes.

In no way am I writing off the Eels prospects in season 2022, but via their inconsistent performances, the players have unquestionably made their task harder.

Every opponent will lift, not to prove themselves against the Eels but because they enter the contest with a positive mindset, believing that they can secure the win.

However, the good news is that the answer is easy to find.

It’s a cliche, but it is a simple case of trusting what are simple processes. Play Parra footy. Uncompromising physical contests, played with patience in the opposition half.

Who wants it more?

It’s who wants to do what’s needed to get the win.

The faith diminishes. Your not wrong. That was appalling last week. I’m close to the stage where this team and coach can get stuffed. They all have to show some guts and pride in wearing the blue and gold.

Senior playing group and captain are responsible to turn things around in my opinion, players on and off field, must be held accountable. If someones not pulling their weight call them on it, if it continues then the coaching staff must react. Our penchant for not dropping players and making them accountable for their actions needs to be remedied. It is a professional game aqct that way

Is there an alpha male in the playing group to lead the team when things start to drift, Ray Price is the measuring stick, Cayless seemed reasonable. Doesn’t seem to be that style of a leader in the current line up. Could be as simple as that and that may be an impact that is lacking..

Agree mate, no one that the rest would follow or listen to, we lack leadership on field and off. Maybe Moses could do it, Gower was good so was Beau Scott

One word needs to be applied to every game.

I get what you are saying about The Storm and Penrith playing with a similar intensity each week Sixties but I believe it’s a little more complicated than just intensity levels. Those two benchmark teams play with intensity but their attacking prowess and the different shapes they throw when they move the ball allows them to coast against poor teams. Usually those teams start strong and put points on the board because they attack weaknesses well and their attack is constantly evolving. This allows them to “coast” and rotate the minutes their big men get each week. How many new… Read more »

“At what point do we stop reflecting on the holiday Monday massacre?” Just then at fulltime. 🙂

Fuckin’ oath they did!!