Time for an off-season hypothetical.

The NRL has decided that the 17th franchise needs a helping hand to get a competitive roster assembled. Lord Peter V’landys has decreed that every NRL player, with the exception of Origin or test players (Australia, New Zealand, England, Tonga, PNG, Samoa), is available to be purchased, regardless of current contract length.

In this PVL draft, each player and club are unable to oppose the recruitment. Each club has to “sacrifice” one non-rep player. The only proviso is that the new franchise is only allowed to “poach” one player from each club. After that, it’s standard recruitment practices.

You are responsible for assembling this roster.

The question to be answered – who are the most “poachworthy” players from each club?

For the sake of simplicity, the scenario applies to the 2022 roster for each club. Do not considered those who are currently without a contract for next season.

There are no right or wrong answers. It’s pure opinion as to which player from each club you’d target if they were available.

Here are my selections:

Stephen Crichton just qualifies for this category as he wasn’t used by Fittler during the 2020 Origin series. I like his versatility, as he can cover  centre, wing or fullback. A noted try scorer, his height and pace afford him an advantage to either finish off breaks or to contest the high kicks. Contracted to 2023. 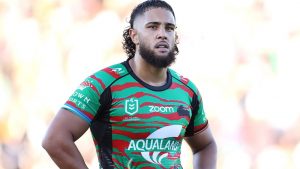 Keaon Koloamatangi seems on the verge of stamping his presence on the premiership. At 191cm and 106kg, he has the size and athleticism to play on the edge or the middle. Souths have a player of the future here. Contracted to 2023.

Reimis Smith was an Eel for a short period of time before moving from the Eels NYC team to the Bulldogs. He certainly hit his stride quickly after shifting to the Storm in 2021. Like Crichton, he’s a tall (196cm) and fast outside back. Contracted to 2022

Josh Schuster is originally from western Sydney (Mt Pritchard) but he’s been in the Manly system since he was 14. He is truly a diamond in the rough, and his impressive skill set sometimes makes the complex look easy but conversely he can make the simple more difficult than it needs to be. Contracted to 2024. 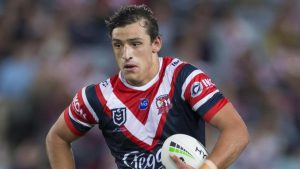 Billy Smith has been incredibly unlucky during his extremely short career. However, he’s shown enough in his five NRL games to impress many good judges. If he can get through a season without injury the talented centre will be in demand. Contracted to 2023.

Will Penisini has the rugby league world at his feet. After just five NRL games the nineteen year old has already cemented his role at right centre, arguably winning the battle against his opponent in every match. There are comparisons being made to Michael Jennings, and his explosive qualities in attack, and excellent defensive reads, give weight to any such comparison. Contracted to 2023.

Bradman Best debuted at 18 years of age after being one of the most highly touted juniors in NSW. A powerful running centre, his top grade appearances have been limited due to injury. Many judges rate him certain to play Origin. Contracted to 2024.

Beau Fermor is somewhat journeyed in his short career. Playing lower grades for the Storm and the Knights, he has played on the edge and at centre since debuting with the Titans last year. Struck strong form late this year. Contracted to 2024.

Teig Wilton was outstanding coming through the junior ranks, representing Australian Schoolboys and NSW Under 20s. The Sharks back rower also has leadership experience on his resume, and plays with both composure and aggression. Contracted to 2023. 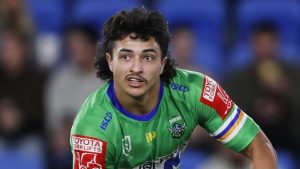 Xavier Savage could be anything. When a player moves from SG Ball to NRL in the same season, that’s something special. After starring at centre for the Raiders in junior reps, Savage played fullback in the NRL before injuring his shoulder. Contracted to 2023.

Talatau Amone is another 2021 SG Ball graduate to make an NRL debut this year. The 19 year old five-eighth is one of the most exciting players to emerge this season. The Illawarra junior first came to the public’s attention when he won the “League of Their Own” try of the year at the age of 14 with a ridiculous solo effort. Contracted to 2023.

Reece Walsh is hardly low profile, but given he is yet to play senior rep footy, he qualifies for poaching. This is really a no-brainer selection, though the young man needs to make sure that he keeps himself away from future off-field dramas. Contracted to 2024 (player option). 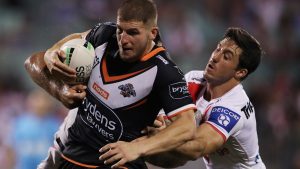 Adam Doueihi is unquestionably the class player in the Tigers squad. Although he’s played for Lebanon and on good coin, the skilled and versatile back qualifies for recruitment and is impossible to ignore. Contracted to 2023.

Herbie Farnworth debuted as a teenager back in 2019, and has been a consistent performer in a struggling Brisbane outfit. Fast, elusive and strong, it will be interesting to see his form with Reynolds service next season. Contracted to 2022.

Ben Condon is a developing edge player and has the dimensions to threaten in attack. Defence is an aspect of his game that requires improvement, though he’s had limited opportunities in a struggling team. Contracted to 2023

Matt Doorey is an Eels junior and an underrated talent. A hardworking back rower, he’s made 18 first grade appearances over the last two seasons in a cellar-dwelling team. The Dogs will be much stronger next year and he’s one to watch. Contracted to 2022

I’m short on dummy halves and middles, but in this hypothetical I was looking to poach the best possible recruit from each club.

Who do you consider to be the one player from each club worthy of poaching?

No need to list your reasons, and no need to nominate every club if no player stands out (I struggled with a couple of clubs myself).

Hopefully they keep away from Reed as has been speculated, or any of ours as unless we upgrade on any losses I don’t think we can afford to lose any.

I’m not even thinking about losing Reed. I expect him to extend. But hypothetically, what Eels player would you poach if you could?

Was picked up on a notable omission via Twitter. From the Storm, Papenhuyzen qualifies as non rep player as he’s yet to play Origin. I’d swap him with Smith.

Can’t argue with that.

Well done. I got tired after about 2 minutes, but 2 I did come up with were Jayden Campbell and Stefano U. It will be interesting to watch Campbell’s progress, real XFactor there.

He could be special BDon.

I’m bowing to your superb effort Wh1t3, this is something that I couldn’t quite achieve with my list. You’ve probably approached it better than I did.

This kind of expansion draft is actually commonplace in US sports. Typically they allow existing teams to protect a certain number of players from their roster. For example, in the NBA teams could protect 8 of their existing 15 man roster. In an NRL expansion draft I would envisage the existing 16 clubs could protect 10 of the top 15 paid players and 20 of the top 30, with a maximum of 3 players per club to be drafted. So, who out of roster would you leave unprotected ?

Bold question Brett. I’ve had suggestions like Anonymous below of Brown. On Twitter Lane has been named. I guess you’d look at where there is depth – so it would probably consist of a mix of middles and edges.

It does make for some careful roster planning

im assuming you’re nominating Brown as a player you’d be prepared to sacrifice?

Me too, i think he has been good for us…..but he would be my nomination, and Ricky Stuart (haha) as coach!! Someone, somewhere always needs a Ricky…..

we should sell speed bump Mahoney . We actually looked better and stronger with lussich.
But but, Mahoney makes 50 tackles, yeah that’s why teams run at him so they can get a quick next play
Get rid of him

I’m fairly sure that the majority of supporters aren’t going to agree with this take.