We’re at the end of week two, the time to settle in before the “veterans” return is over, so why not take it up a notch?

That seemed to be the attitude of the players, and they probably exceeded the expectations of the coaches in doing so.

Friday’s session provided the coaches with plenty to smile about. The new faces have gelled quickly, and with a couple of weeks of training under their belt, it will be interesting to see how they shape up when training alongside the incumbents next week.

Here’s what I observed over the past two days:

In a one hour session, a variety of general play kicks were drilled, from last play options in their own half of the field through to their short kicks when attacking the line. The movement into, and delivery of the kick varied according to the side of the field they were on.

As the session unfolded, Johns corrected their body position, ball drops and strikes. I reckon many playmakers have favourite kicks that become their “go to”, regardless of flaws. In watching Joey coach, you can see him taking the players out of their standard repertoire, if not out of their comfort zone. He’s adding to their arsenal, allowing them to ask more questions.

Furthermore, the immortal also explains the tactical rationale of particular kicks and the importance of communicating the intent to team mates. He gets them thinking more about their roles as playmakers, and to ensure that thinking continues, he sets them homework.

Is there a new challenger to King Gutho’s crown?

That was the question to emerge from today’s conditioning work.

The heir apparent was always going to be Dylan Brown, and his exploits in pushing the King during recent preseasons have been well documented on TCT. However, it would now be fair to say that a new contender has emerged – Jake Arthur. 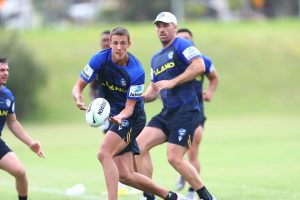 Leading from start to finish in the sets of runs, the tall, young half laid down the gauntlet to Dylbags. Unfortunately, the true test against Gutherson won’t be answered until Parra’s Origin stars return to Kellyville at some time during January. In the meantime, let’s see how Brown responds!

Once again, the other player to note was Bryce Cartwright. This bloke is an absolute machine when it comes to the conditioning work.

The squad was separated into backs and forwards for the sets of 800, 600, 400 and 200 metre runs. The backs were released first, approximately five seconds before the forwards. Despite this, Cartwright managed to run down all but the leading backs. The further the squad goes into the sets, the stronger he seems to perform.

But wasn’t all about fitness today.

After each set of runs, and under fatigue, games of four tackle, two handed touch were played. The confidence in the group is obviously high, with fast expansive football played.

With 11 players in each side, the spaces were available if the footy was given air – and it was. Of interest was Maika playing at centre in one game (don’t read too much into that) and putting his winger into space with a superb reverse pass. 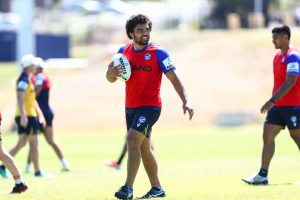 Isaiah Papali’i continued to impress with the lines that he runs and is definitely staking his claim for a place in the 17. He seems to find holes or get defenders on the wrong foot. I probably won’t see how this translates to full contact until opposed sessions are introduced – most likely in the new year.

The variety of passes, angles run, attacking chip kicks and grubbers on show produced footy that was akin to watching a game of nines. There was a heady mix of long distance tries, quick fire red zone attack and desperation chases. Aside from the flashy skills that this type of game produces, there was also the staples such as kicks for field position, the kick chases, and plenty of talk in both attack and defence.

The morning concluded with an extended period of try line defensive structures. This included methods for shutting down a variety of attacking kicks.

As a spectator, today was a highly entertaining session to watch. Next week, training lifts again as the majority of the “seasoned” NRL players return.

Interesting post sixties, looking forward to when the rest of the team get together.

I looked through the eels webb photo’s & looking at Papali’i he doesn’t look that big, yet his profile page says he’s 108Kg’s he certainly doesn’t look it, with Stone looking bigger.

Another good read Sixties. Have been checking in today while reading “Apocalypse Never “. It was worth the wait to get your feedback I am trying to contain my enthusiasm that there may be a nett gain in the squad from the off season recruitment. With players like Papalii and Cartwright the most likely to contribute to that. There will also be good fringe players in the likes of Roache and Lussick that could also make strong contributions to the 2021 season However as has been the case of the last few seasons we have the excitement of the juniors… Read more »

Thanks John. Training should kick up a notch with most of the squad back next week – looking forward to it!

Sixties, do you see Papali’i possibly playing on the left edge and Lane moving to the middle off the bench?

It’s very possible. It’s also possible that Papali’i plays middle off the bench. I’ll get more of an idea when opposed begins.

Hope not. Lane is an outstanding edge forward and like Bernie said, they are as scarse as hens teeth. Please play to your strengths BA and leave Lane on the edge.

Good read mate, and I like hearing about the new fellows such as Papali’i and Arthur. Where do you see Jake being in 1-2 years as in positional?
Carty continues to impress…..

Sounds like young Jake may play a hand in determining Mitchell Moses next contract value and potential club?

Jake will probably start in Flegg this year, before moving to CC. That’s not to say he won’t get a run in the CC trials like he did last year. Mitch Moses has always been very supportive of Jake. He’s actually become a very good team man.

Tks sixties, I enjoy your reports. Off topic, also enjoyed the Ray Hadley stories about Jack Gibson. Jack trod many and varied paths, a PhD in life. I just shake my head quietly to myself when I hear Bennett or Bellamy labelled the best.

He was a true pioneer. Everyone else follows in his footsteps.

Thanks for the report.Have been off grid a while and had to read all reports at once.I am always excited for next season and while some have questioned our recruitment so far I think we have added some exciting talent this year.I know Jake has been around the boys for years now but what a thrill and a blessing for him(and the other halves)to be getting coached by Johns at this point in his hopefully long and successful career.Thanks again.

Cheers Eggman. I made the same observation myself this week. To get that education before you’ve reached the top grade – I wondered whether that means that there is less “unlearning” for younger players.