Ladies and gentlemen, the Eels have just won a game which, in their recent history, they would not normally win. How many of you would echo that sentiment?

Last Friday was a display of how far the team has come. Wet, slippery night conditions are not ideal for the Eels and their attacking set up. Quite frankly, the conditions played right into the Panthers strengths.

But the mighty Blue and Golds managed to win and one tiny moment and action summed up why they won and the growth of this team.

In the last ten minutes, Gutherson twice defended kicks into the in-goal with desperate Panthers players chasing and he quickly grounded the ball each time. He didn’t try to pick it up to execute a miraculous escape. The 2018-19 version of Gutherson was prone to attempting something extravagant and it did not work. This time he backed his teammates and trusted the work they had done over the off season to hold out the Panthers for one more set.

That decision shows great leadership. He trusted his team and backed them. That trust is developed over time, it cannot be achieved easily. It is gained when you recruit and retain the right people, when you have honest and forward thinking reviews that you act on. That one simple action last Friday summed up for me how far our team and club has come.

I don’t know how far Parra will go this year. Like all teams, luck will play a role but I know one thing for sure. We have the players, coaches and fan base that will do all we can to achieve the ultimate success. 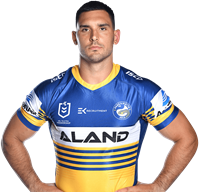 The Eels young leadership group of Paulo, Moses, Matterson, Nathan Brown and Gutherson stepped up last week. They got the team back in the game and showed the way for everyone else.

I have faith Parra will continue to improve and just maybe supporters can really start to believe in that ultimate success come November. To some degree the game against the Roosters will show us how far we have come. I am confident they will stand up well. But competitions are not won in Round 6.

They say past behaviour is the best predictor for the future.

Over the extremely recent past, circa 2020, this team’s behaviour has told me that they will learn both the good and the bad that came out of the Panthers game and set about learning from it and improving. The test of that learning will come soon enough, because any team will undoubtedly have to go through the Roosters to win this premiership. This week gives us a chance to gauge where our team is at.

On Sunday we received the news that from July 1 the maximum attendance at games will be increased to 25% of Stadium capacity. However, trying to accommodate everyone who “deserves” entry into a reduced capacity ground will remain a challenging task for administrators. Like most fans I cannot wait to go back to the games but I’ll be patient.

Against the Panthers, the Eels showed us that they too are willing to be patient and work for each other. I was proud of how they played, so whether I get to cheer them on From The Stands or From My Lounge, they’ll get all of the patience and support that I can possibly give.

It was a very positive thing to see Gutherson ground the ball. Likewise, when D Brown deliberately gave away the penalty and was sin-binned, that was a match winning move. I hope they keep their heads as well as they did in that game for the rest of the season!

We are playing as a team. For too long we have had a team with some super stars who could win by themselves but this created trouble for us. No one is waiting for someone else to win it, they are doing their job and winning collectively. They won’t win every game but I have more belief in them and feel more confident that they won’t beat themselves. Credit to the players and coaches for seeing the problem and fixing it.

I must say I was crapping myself if they scored we had to play extra time with 12 men. I’m not sure that the penalty was necessary

I know why D Brown did that, but I was a little uncomfortable with it to be honest. Parra have always played fairly and to the spirit of the rules. Not sure what BA would have to say on that.

Agree Shelley, the attitude thing is cranking up. Our spine as a whole, has improved both mentally and physically.
A great indicator v Roosters will be our middle defence. Thus far, we seem more up to the task, focus, agility, scramble, 2nd effort. Both Penrith tries out wide, only one bad ruck lapse in a tough game(Liam Martin, although on the edge and covered by Gutho). The roster mix is a big driver.

I can not believe how quickly our spine has grown. They have to keep improving as too often young playmakers shine early but then don’t improve. I watched the game last week with my grandfather and he has watched many Parra games and seen numerous young star playmakers come through and he simply said when Brown kept tackling and taking on the line with runs ‘ that boy is very good, he has a feel for the game- footy smarts’ Let’s hope he is right.

Thanks Shelley and great read, it was a gutsy win for me and to come back from being down was even more pleasing. Again if we are to be considered top 4 then we need some good performances over the next 4 wks or so. No game is easy as we know and its about being consistently good; that is what the Melbourne / Canberra and Easts teams do. While not being a fan of those teams they have shown themselves to be quite consistent and also resilient.

While we may talk about the sombrero I have to admit that I respect the Roosters. They have consistently been able to adapt their football. When they play Melbourne they play a style that is different to that when they play Manly. They change style but not effectiveness. They are not one dimensional. As much success as Melbourne have had in the regular season they struggle in the finals when they come against a team that can match and slow down the forwards. They do not have another style to play. I feel we are developing a style of play… Read more »

I could not agree more with your last point Shelley. It is time……think that may have been a political slogan at one point.

Parra looked like they were headed to the old ways for a time in the second half. BA jumped on that quickly though and they came out much more disciplined and focused in the second half. It’s great to see that the team can now do that, and they know what they need to do to win games even when the victory looks unlikely. They will need to be focused all game this weekend.

I reckon you’ve nailed it when it comes to how we might go in the finals. If we don’t keep the good every week because it clearly isn’t broken? Then we will be overloaded at the other end of the spectrum trying to fix what still needs fixing. The patient resolve our team displays is giving much substance to everyone’s expectations!