As Shaun Johnson replied when asked during this week’s media calls, “I don’t know if it will increase more, but you might hear it a bit more.”

Stadium lock outs are going to be a massive adjustment for players and for those supporters who enjoy the atmosphere created by a rugby league crowd. Unquestionably, our favourite memories are often associated with big clashes and capacity attendances.

However, as Johnson has noted, broadcast viewers might be on the cusp of experiencing football as they never have before.

Regular readers of my Parramatta Eels pre-season training reports would note that I often include player talk such as communication in defence, and encouragement/urging during conditioning work, when assessing how impressive a session has been. I also report on the sound of the collisions in attempting to describe the toughness of opposed sessions. I can comment on these features as there is minimal surrounding noise blocking what I can hear.

Despite sideline microphones and mic’d up referees, broadcast viewers are only receiving the smallest portion of the sounds of the footy. Even those who are in the stadium rarely hear the on-field voices. You don’t need to call on Einstein for the reason – the crowd drowns out the majority of the sound. 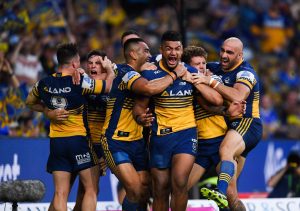 Celebratory moments like this could be captured as never before.

The talk on a footy field is universally regarded as a barometer for how a team is travelling during a game. Sideline reporters will often reference whether they can hear the communication between players at key moments as a team either struggles or asserts their dominance. A “quiet” team is not a good sign.

Now, in our lounge rooms, we will have similar access to these “sideline eyes”. Imagine the tension this will create for viewers who will be able actually hear momentum changing. The “wind in the sails” will be an audible phenomenon. We’ll be riding along in those moments of celebration, elation or frustration like never before.

It’s not rugby league as most spectators know it, and players will find it strange to perform without a stadium full of people, but the next few months could deliver a new broadcasting dimension that only attendees at park footy are familiar with. 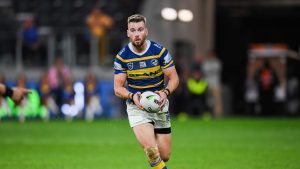 We should hear plenty from King Gutho

Providing the ground microphones do their job, I’m expecting to hear the fullbacks as a dominant voice, especially in defence. They’ll be organising the line in front of them, getting players to move left or right of the ruck or to fill in spaces.

We should also hear players in the defence line communicate with each other when the attack heads their way. The opportunity will be there to learn more about why the best defensive teams are so successful.

The sound of collisions might be an adjustment for some viewers, but it will delight football purists. Rugby league is a physically tough game and this should be captured perfectly in empty stadiums.

Conversely, we will find out who the key players are in attack. Calls, over calls, and the names of plays or shapes will be heard in lounge rooms. Viewers will become more familiar with how skilled play makers are at reading the play, along with their art of deception.

And then we come to that “friendly banter”. It will be intriguing to see how the players respond to this. I’d be surprised if all aren’t aware of the likelihood that things said will no longer be left on the field.

Noted “grubs” might pull their heads in, extroverts might sense a new audience for their sense of humour, and there will no doubt be those who simply don’t change. That said, it’s unlikely that the “colourful language” will be restrained in the heat of battle.

Imagine this bloke out of retirement!

The audience will be the flies on the wall as dynamics within a team or even between teams are revealed. I can’t wait to tune in to the antics of the “Josh Brothers” – Reynolds and Hodgson. Can we encourage Michael Ennis to make a comeback? I never thought I’d wish for such a thing!

These are challenging times and the NRL can hopefully continue to provide the distraction that many of us are looking for.

Embracing the different colours that empty stadiums will introduce to the coverage might just be something that we will all enjoy.

Credit to NRL.com and Eels media for the images used.

Who knows what we’ll get with these games Sixties. Maybe we’ll get some “canned” hits or crowd roaring/cheering/booing like we get with shows that have canned laughter/clapping.
I was finally going to go and watch a live game this year (it’s been more than 40 years since I attended one) but I guess I’ll have to wait a little bit longer. Ray T😷

So this is all your fault Ray?
I hope we don’t get canned applause. I personally hate the recorded chants that are used at Parra to get the crowd chanting. I also detest the ground MCs calling on the crowd to start cheering.

I’d imagine the broadcasters will turn down the on field and sideline microphones won’t they? They won’t want the risk of swearing and potential insulting banter. God forbid if a player sledged someone’s wife or sexuality, the fun police will have the pitch forks out for sure.

I hope that we don’t get microphones turned down. I understand that swearing is not ideal, but it’s almost second nature for these blokes when they are in the heat of battle.

Clive i think that would spruce the games up…..but i think you are right about the PC brigade.

I reckon the players will be very aware of what will be captured.

Unfortunately Joe, at a time when we have no choice, we have to find a way to enjoy it. For me, it might be like watching lower grades or junior reps at Wenty – being able to hear the calls.

That’s the reality sixties, we’ll have to accept it for the best. With everything being called off, pub darts even at risk,we just might be thankful for NRL virus-style. We re going to need something rather than endless reminders of a crazy world. The teams strong between the ears will probably do well, same as usual.

These circumstances would seem to be tailor made for the Roosters or the Storm. At the other end of the scale is the Warriors – even allowing for the hurdle of being away from home.

I just appreciate the game being played and may be in minority but believe its a good thing. The amount of hysteria has been pathetic and the focus should be on the elderly / vulnerable…anyway i will not say any more.
I just hope the TV can pick up some sounds with the microphones as the tackles / hits will be the interesting part along with the scoreboard.

The first game is after 8pm so hopefully the microphones aren’t censored!

So now we will be given the privilege to view the motion picture version of rugby league as opposed to its live stage production variant. We’re moving from Broadway to Hollywood for the foreseeable future. I suppose I can handle it. Just as long as it doesn’t turn into Rock ‘N’ Roll Wrestling. And just as long as I can sing, ‘Say goodbye to Hollywood’ someday soon again.

What was the name of that rugby league movie that Matt Nable made – The Last Winter? Wait, what….

Matt’s a good fella despite him once being a Manly junior (is that an oxymoron?).

I’m sure alot of fans here have played a bit but for those that have not, they may not realize the talk that goes on between opposing players in tackles,in scrums and lining blokes up calling for them to run it etc.most of it is funny but sometimes not, especially if there is any grudges between gnarly old forwards, and I reckon it would be so awesome to be able to hear all of it even the stuff that is growled in your ear when someone gets you back for when you smashed them earlier in the year or even… Read more »

One of the funniest moments I’ve seen was in the NSW Cup Maitland trial a couple of years back. The kick off went to an Eels prop. With his Newcastle opposite charging towards him, the prop changed the direction of his run to avoid the confrontation, causing the Knights player to scream out something about him being a cat. (I don’t recall another consonant in the name calling). There’s quite a bit of banter within the Eels team at training which I enjoy as well as at the lower grade games at Wenty. At the moment we’re mostly hearing non… Read more »

I think now days there are less types of players than the 80’s and prior era when the game moved into the professional era.
Some players talk too much and it can be cheap and i guess the majority play what’s in front of them, but some old banter is never a bad thing.

Don’t mind the banter. Some recent stuff that crossed the line in junior reps was dealt with by the refs, which was a good thing.

Cheers Pou. As it turned out, the commentary ended up referencing something similar.

Good write up mate. 100% hearing snippets of on field talk is a opening up the general fans perspective of the game. They normally watch a try scored and than hear the commentary team describe how the players constructed that move to get that result. You can now be lucky to hear how play makers direct plays and action to set up for that shot or play. As far as player intensity without crowds have to take my hat off to the boys playing in the Broncos – v – Souths game the other night. The hits were hard and… Read more »