If you’re in a full time NRL squad and looking to make an impression during a preseason, how do you put your name in lights?

You compete harder than a reality show contestant fighting for screen time.

And when you do, technology is now on your side.

That’s not to say that the eyes of the coaches and support staff won’t notice the fellas busting a gut, or conversely those coasting through on minimal effort, but GPS has changed the landscape.

There is nowhere to hide.

Distance covered each day is important, and allows for individualised programs. But perhaps more critical is that GPS also measures the pace of the work, after all, a player could cover 5km at walking pace or at speed. One of those outcomes indicates an NRL player who will make effort on effort under fatigue during a match.

Today’s session was undoubtedly the best of the preseason thus far. Questions were asked of the players’ willingness to compete, and consequently, opportunities were there to impress.

Nobody wanted to hide!

Two fields were in action for most of today’s session. After the warm up, the squad alternated between modified footy games on Field 1, and skills/conditioning on Field 2.

There was little time to rest during the two hours, with the players quickly transitioning between the fields.

This brought out some of the talk that had been missing earlier in the week. Unquestionably football players love playing footy. There was plenty of footy this morning, with these rapid fire games on a full field. The talk followed and the players were sharp!

After each game was completed, the players moved across to Field 2 for their skills/conditioning. In saying that, there was no shortage of conditioning value in these games.

The first game was three tackles, touch footy. Apart from a few specific rules about what play was allowed (eg minimum passes), the emphasis seemed to be on maximum ball movement with minimal possession. 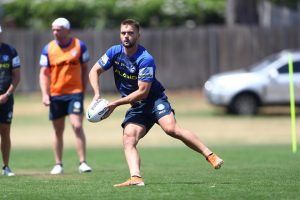 The highlight of the first game was Salmon’s beautifully executed grubber kick for a George Jennings try.

The second game looked to increase possessions to about four per set. The major difference to the first game was that the “tackler” had to exit the field, then run around the nearest sideline marker pole, before returning to the field of play.

If the player was from the middle, a far greater effort was required to leave and return to the play, not to mention the longer period of time that the defence would be down a player. A quick follow up play down the middle could effectively take out a second defender.

Player movement was constant, with the defenders running off the field and attackers shifting the ball rapidly. The highlight of this game was the pace of Ryan Matterson and Stefano Utoikamanu in chasing down line breaks.

The final game involved defenders remaining on the ground after each tackle. This not only took out a defender with each play, but also showed the track followed by the attack during a set in possession. There were many more attacking opportunities in this final game, with the defence constantly challenged.

It was the ideal way to wrap up the games component of the session.

The squad was broken up into three groups – spine, middles, edges – with each group taking on a drill station. They rotated to a different station after each transition from the games component. The stations were essentially as follows: 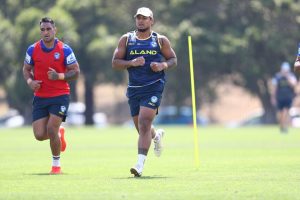 Station 3 – Specific skills in a grid

The variations mostly occurred during the grid station.

When the edges were at the grid station, they worked on a draw with a longer pass, with the defender chasing.

The spine worked 3 on 2 , with shorter passes.

The middles worked on running lines and catching passes into bump pad contact. Oregon, Stefano and Gowie caught the eye during this work.

After the final game, the squad received specific contact and ground work coaching. This is very technical – gaining control of the tackle and ensuring that the defender is able to be off the ground and in position before the attacker. Given the defensive issues from certain games last season – with defenders still on the ground as the ball was being played – a continued focus on these techniques during the preseason is critical.

As usual, the morning concluded with extras. The squad separates into small groups, working on specific skills such as the kicking, passing, or catching that is specific to their position. To put this in perspective, Reed’s precision passing and kicking from dummy half comes from being the last off the field during extras, Fergo’s faultless defusing of bombs from his catching practice, Moses’ and Brown’s long passing games are honed during their extras work. 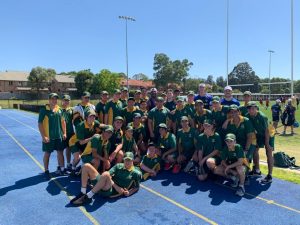 The Marist boys with Sivo, Lane and Duggan

Old Saleyards hosted a group of students from Parramatta Marist High. Organised by Marist teacher, Craig Brennan (Eels SG Ball Coach), the young blokes were a credit to their school with their impeccable conduct.

Their visit began with some time with Brad Arthur, before they watched the session unfold. A big tick to Ryan Matterson who high fived as many students as he could as he moved between the fields.

And the timing for the visit was good, with both Blake Ferguson and Maika Sivo back into work.

Next step for the students was a visit to the Centre of Excellence at ANZ Stadium. I’m sure they would have done their school proud at each venue today.

Any standouts yet m8

Before any serious opposed work starts, I try to look for those who might have an unexpected impact in the upcoming season. At the moment that’s Andy Davey. But what is standing out is the big, mobile units in the team. Matterson, Lane and RCG are part of a huge pack. You don’t get a true sense of that until you see them up close. And young blokes like Hollis and Hughes are going to be truly imposing when they finish growing.

Thanks Sixties, a key element that all the good sides strive to acquire and field is a Big Pack! I believe it will make space at the line for the Nathan Brown, Ray Stone type player to thrive in 2020. Both good backer-uppers and always looking to create or continue momentum.
Gee I can barely wait to see the combinations that can/will develop with Matterson on the right having Wonga and Fergie running off him and Mitchell. Big Shorn Lane, will again be a great foil on the left for Dyl, with Mennings and Sivo having another off-season together.

Matto is really looking forward to playing on the right beside Moses.

Interesting read sixties and thanks, enjoy each of them.

Looking at the small pic of Marata and Oregon, Oregon seems to have bulked up quite a bit, I had noticed that in some other pics and it looks like he’s a lot more muscled, his resigning is a good move as well, & hoping he will be seeing a good degree of NRL playing next season.

The Storm interest in Oregon was well documented, and to be honest, he seems like he would fit like a glove in their pack. Very glad he’s staying.

I watched his interview on the eels webb site, he comes across as a very quiet and humble sort of person, a good fit I believe, I also am very glad of his signing, still young but he has a bright future before him, has the size and desire to achieve I would believe.

I honestly believe with these signings along with that of Joey who I think may be the most crucial one going forward,

Colin, besides being a good footballer, Oregon is one of the most genuine young blokes you could ever meet. That footage of him at Giant Steps School with his young mate was an indicator of what he’s like.

Thanks mate, his interview showed what sort of person he is, Nothing will surprise me with him.

Thanks sixties for the report. Just wondering about your thoughts on the signing of the 8th immortal and has he had much to do with training

Dazboy, I missed his first session with the spine. I’m going to try to find out if he’s there for the spine at a particular field session each week or whether he will just work with the spine at a dedicated time.
My thoughts – Joey has gone on record in commentary about his high opinion of Dylan Brown. He wants to be involved in developing his skill base, and if you can get a specialist coach like him with his experience and credentials, who is passionate about the players he’s working with, it can only be a positive.

The importance of Joey coaching our spine cannot just be measured on a personal performance level. Sure each individual will benefit in seeing things from the perspective of arguably the greatest living rugby League tactician, but thanks to his guidance the attacking structures of the team as a unit will improve, which is an area which we have struggled over the last many seasons.Would you say it is akin to having an attacking coach or is there someone else who is responsible for those kind of structures ie.the Coach?

I guarantee you this about BA. If someone like Joey offered any insights about an opponent or a play, he’d listen.

Hi and thx.
Wld u mind giving me your impression of the player sizes specifically Is utoiakanu noticeably big say v Payne haas. Is he as thick as junior Paulo and is Oregon very big. Thx Sixties

In terms of build, Stefano is closer to a Payne Haas body type than Oregon is. Stefano is taller than Oregon, and I think, a bit faster. There was footage around (which someone might link) of Stefano taking an intercept close to his own line in Flegg and running about 80m before he was caught..
Oregon is more compact and powerful. He presents a different challenge for defenders – see his NRL debut try. Nobody is as thick in the body as Junior.

Thx for the reports, always enjoyable. What is your impression of the intensity of training when compared to this time last year?

Glenn, it has been building. Check out today’s report.

Tks sixties. It’s gradually taking shape. Anything on Nathan Brown and the moon boot?
Are the defensive drills substantially different to prior years? You can definitely see the method in the madness.

We have a specialist contact coach, so his work looks different.
Haven’t seen Brown as yet, but that doesn’t mean he hasn’t been there.